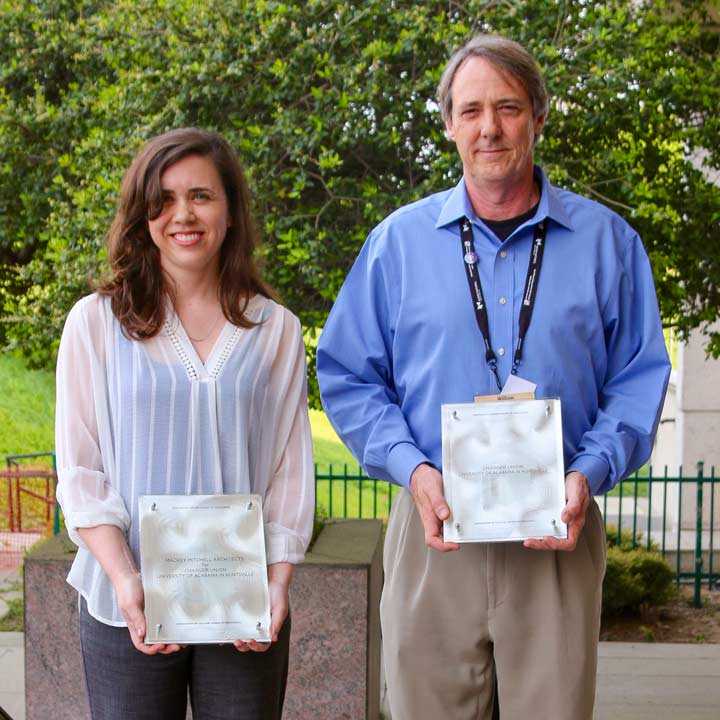 The new Charger Union on the campus of The University of Alabama in Huntsville (UAH) recently gained national attention as a recipient of the Association of College Unions International (ACUI) 2015 Facility Design Award. The state-of-the art student center designed by Mackey Mitchell Architects opened January 2014.

"The Charger Union is the place on campus that students can call home. We are delighted to receive this recognition from ACUI and are grateful for our partners and architects at Mackey Mitchell and TurnerBatson for really listening to our student planning committee during the process," said Dr. Regina Young Hyatt, UAH Dean of Students. "It's so exciting to see students using the space each and every day and I think they enjoy the Charger spirit that the building inspires through the décor and furnishings that we chose. Again, we are so excited for this award. We think the Charger Union is a special place!"

The ACUI national design award is given annually by the collegiate organization and recognizes excellence in design of college unions as well as other student-based campus buildings.

Last year TurnerBatson, architect-of-record for the UAH Charger Union was awarded the 2014 American Institute of Architects (Birmingham Chapter) Merit Award in the Institutional Category for the project.

Additionally, Charger Union was also featured in the March 2015 online newsletter, Design Alabama, and a recent edition of the ACUI (Association of College Unions International) Bulletin.

The ACUI Facility Design Awards were created to encourage and recognize excellence in the design of student-centered facilities that support campus community building and student learning.

ACUI is a nonprofit educational organization that brings together college union and student activities professionals from hundreds of schools in seven countries. Its members work on urban and rural campuses, in two-year and four-year institutions, and at large and small schools. They are students and administrators whose mission is to build campus community.