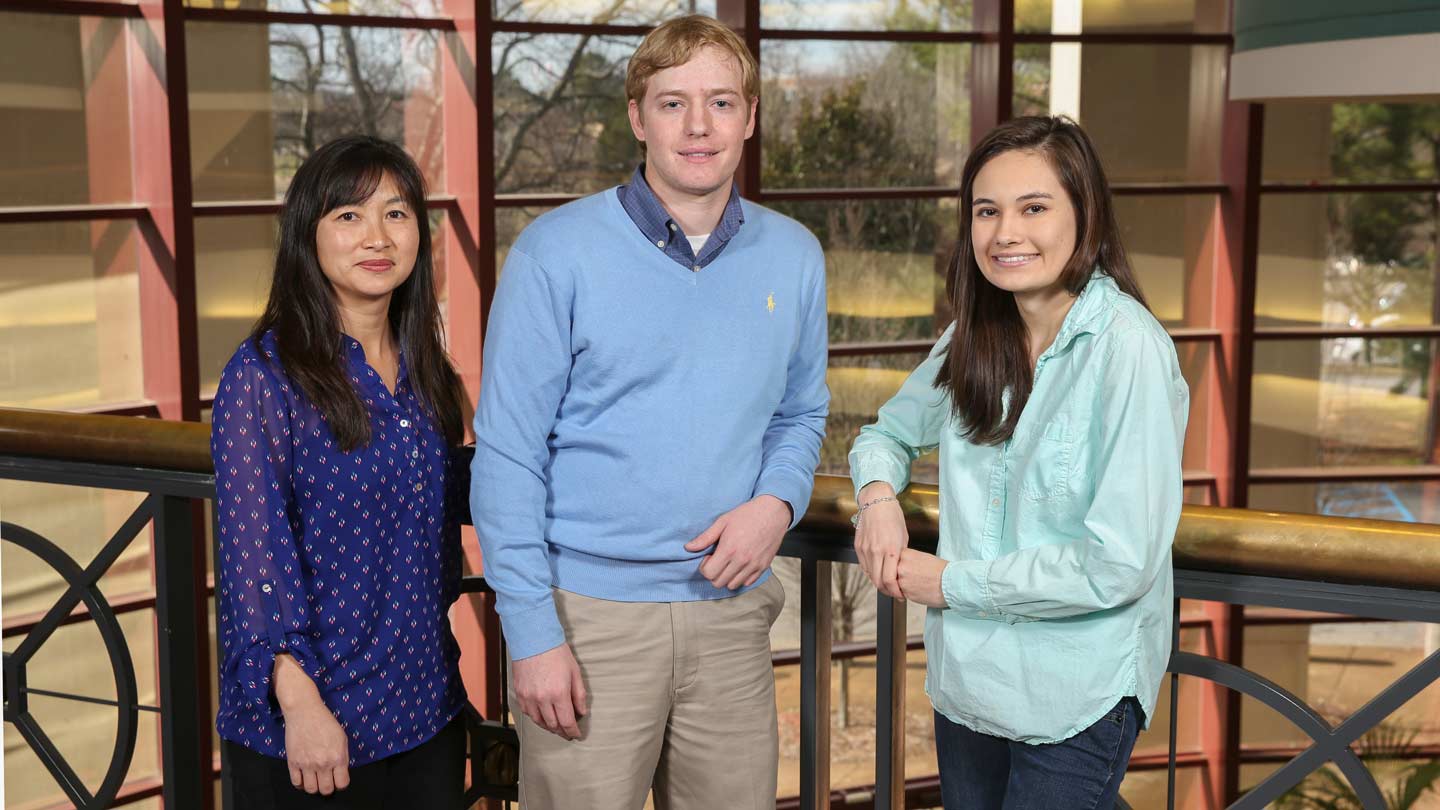 Just six months ago, Tien Pham couldn't have told you what riprap was. Today, however, the business graduate student at The University of Alabama in Huntsville (UAH) is proud to say she has a pretty good handle on construction terminology. "Now when I see road work, I have a whole new appreciation," laughs Pham, who worked as a nurse before returning to school to pursue her master of accountancy degree.

That's because Pham, along with her fellow graduate students Christine Woodard and Schuyler Rich, are currently serving as business development consultants for minority- and women-owned small businesses interested in working with the Alabama Department of Transportation (ALDOT). Their efforts are funded through a $260,000 grant that the College of Business Administration received from ALDOT last June to help disadvantaged business enterprises (DBEs) become more successful at bidding on and acquiring ALDOT contracts.

"This is the first year that the College of Business Administration is doing this, and it sprang from an existing mentor-protégé program between UAH and ALDOT," says Pham, who was appointed team leader. "They found the DBEs were lacking in the business development area - many didn't have a business plan, which is important for them to get financing, and they didn't have any marketing skills. They knew how to do the work itself but not grow the business side."

With the goal of graduating 10 DBEs at the end of the year-long project, the trio started by cold-calling close to 200 small businesses across Alabama, using a list compiled by the state's DBE Supportive Service Centers. Those who expressed interest then received a questionnaire asking them basic questions about their businesses. "Ultimately we ended up with 12," says Pham. "We wanted more than 10 because we knew there would be attrition throughout the year."

Running a successful business is not just about being good at your skills. They may be able to lay concrete and work a backhoe, but they don’t understand how important it is to focus on their business process.

The next step was to perform a needs assessment of each of the DBEs that would enable the trio to determine what type of training and assistance each would benefit from going forward. "We found 10 common needs that everyone had, no matter how big or small their business was," says Woodard, who earned her bachelor's in acquisition management from UAH and is now pursuing her MBA in federal contracting and procurement. "So we based all of our planning off of that."

Some of the issues were easier to resolve - many owners were simply unaware of the vast amount of resources already out there, for example. "There's this massive chasm between the information that's available and what they know," says Rich, who is pursuing a master of accountancy degree since graduating from UAH with a bachelor's in accounting. "Some didn't know they could go on the ALDOT website and find information about the bidding process," adds Pham. "So we could help with that."

But others posed a greater challenge. "Cash flow is a big issue. Small businesses often lack a back office, so the owner is the CEO and the janitor - they do it all," says Rich. As for those lucky enough to be able to afford other employees, they don't always see the "connection in that investment," he explains. "Running a successful business is not just about being good at your skills. They may be able to lay concrete and work a backhoe, but they don't understand how important it is to focus on their business process."

That's where the trio's personalized business plans come in. "Right now we're working with them one on one and going into the financial and marketing aspects of the program," says Pham. "Schuyler is working on some financial templates to make it easier for the DBEs to plug in the numbers, like, what are your cost structures to keep your business afloat? Then we can build on that and say, if you're going to take on this project, what will the cost be so you can build in rates and make money?"

Already, says Woodard, they've made significant progress. "They're starting to see that they can make a profit, and that if they can work these things out themselves, they won't have to outsource them," she says. And the DBEs haven't been the only ones to benefit. "They've taught us too!" she laughs. Pham agrees. "We've trail blazed," she says. "It was all new to us at first, but there were a lot of lessons learned. Now we kind of know what we need to do."

And while none expected it, they've also become emotionally attached to the DBEs over the course of the program. "I didn't realize how truly involved I'd get in this," says Pham, while Woodard says she feels the three "have a responsibility to do everything we can for these people." The same is true for Rich. "We know the DBEs now and a lot are just people who work hard - they don't want a hand out but a hand up," he says. "I definitely have an interest in them succeeding outside of meeting the program requirements."

Moreover, each has gained better insight into their own areas of strength when it comes to business development. Rich, as mentioned, excels at finances. Woodard, meanwhile, is great at visualization, going so far as to design new logos for a few of the DBEs. And Pham is a pro at communication. "Tien has also been putting in a ton of extra work," adds Rich. "She took the bull by the horns from the get-go, putting in the extra hours. As a result, she is largely responsible for the program's success."

As graduation for the DBEs nears, the trio is confident that their pilot cohort will leave with the essentials needed for success. In addition to ensuring each will have a detailed business plan, says Pham, "we're helping them prepare to enter the mentor-protégé program." They're also hopeful that the program will continue going forward, even as all three are set to graduate themselves in the near future. "We have a whole Google Drive of stuff for the next people," says Pham. No doubt one of those documents is a glossary of construction terms.