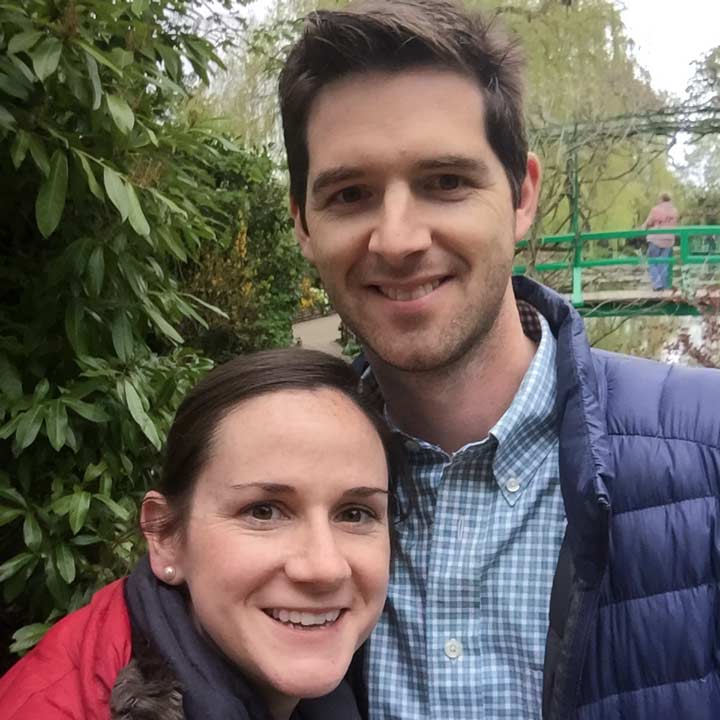 Jason Back ('01 BSE, '04 MSE Engineering) wanted to be an engineer since elementary school. "I loved everything LEGO and space when I was growing up and decided early to turn both interests into a career," said Jason Back an alumnus of The University of Alabama in Huntsville (UAH).

Molly Riley Back ('03 BA Psychology, '09 BSN Nursing) worked with at risk children in the mental health field and quickly realized she wanted a better understanding between the medications the kids were taking and the possible underlying biological and physical disturbances in their bodies. "Nursing was the best way to understand the dynamics between the physical, mental, and emotional aspects of the people I was taking care of," she said.

The two met through the UAH Greek system — Jason a Sigma Nu and Molly a Delta Zeta.

"Jason was completing his graduate degree and I was finishing up my bachelors at UAH. We got married in Huntsville in 2002, right in the middle of the Auburn-Alabama game, massive fail on our part — massive thanks to our friends who skipped the game and actually showed up," said Molly.

Jason graduated from a small private high school in Kentucky and took advantage of the Advanced Placement Physics and Calculus classes. "I was awarded the Freshman Merit Scholarship upon admission to UAH," he said. "I completed an undergraduate degree in Aerospace/Mechanical Engineering in 2001, and immediately began work on my graduate degree in Aerospace Engineering at the UAH Propulsion Research Center. The UAH Engineering Program was very challenging but included many real life examples and problems that allowed me to easily transition from school to work."

About two years ago, the Backs embarked upon a fabulous adventure that detoured them off the typical path of employment and raising children. Jason and Molly had always talked about living abroad, but with children they didn't know how to make it happen. "I love the South and Alabama, but I was ready to see more. Last year, Jason and I went on a trip to Italy and we fell in love with Europe," Molly said. "So we decided to give ourselves a year to make it a reality. We both searched several different options and eventually I found the perfect fit on the USA jobs website in a posting for a NICU nurse in Germany." Molly is an Army DOD civilian nurse stationed at Landstuhl Regional Medical Center (LRMC) in Germany. "We are about an hour from Frankfurt, Germany and about four hours from Paris (France). LRMC is the largest American hospital overseas serving soldiers and families in foreign countries. Molly's first job after graduating from the UAH College of Nursing was in Huntsville Hospital's Neonatal Intensive Care Unit.

Time and again, I think back to my time at UAH School of Nursing and feel lucky to have had such amazing instructors, clinical experiences, and opportunities for research.

"We are the first stop for those injured in Afghanistan, Iraq, Africa or anywhere else downrange. It is also the largest concentration of Americans living outside of the United States, and thus, we get a lot of babies born here. I care for the sick or preterm infants of warriors and their families," Molly said.

Another large part of her mission in the LRMC NICU is international transport. "As a member of the Neonatal/Pediatric Critical Care Air Transport Team we have the largest area of responsibility of any transport team in the world, including all of EUCOM, AFRICOM, and Eurasia. Time and again, I think back to my time at UAH College of Nursing and feel lucky to have had such amazing instructors, clinical experiences, and opportunities for research," she added.

In the past 10 years, a team was sent to Afghanistan to establish an operational NICU, transported multiple complex cardiac patients from all over Europe to the United States, and provided urgent local transport care of critically ill newborns. "I am here for three to five years and plan to stay in the GS system for years to come. It has been such an honor and educational experience getting to serve our soldiers," Molly said.

Meanwhile, Jason went from working on the number one rated NASA project to staying home with the boys and continuing their education. "It was a bitter sweet transition and one that I feel incredibly lucky to have," Jason said. "Obviously, I miss my work on the James Webb Space Telescope, it was a groundbreaking mission with NASA and the realization of all my dreams of space as a kid. However, the desire to move abroad and to experience other cultures was something that I knew I wanted to make a reality." Jason said when living in the U.S. he would see their children for two to three hours in the evening after work and on the weekends. "It wasn’t enough for me or for us. We wanted the majority of our time to be spent as a family. Now it is. Molly works three to four days a week and the rest of the time is ours. We can travel, play, study languages, head to the local sites, or just spend time together," he said. "Taking the reins for homeschool was a rockier transition. Molly and I plan their lessons together but I am the day to day teacher."

The boys study all the basics like math and reading, but also do amazing engineering projects, telescope work, tinkering with LEGO robotics and whatever we can find in the garage. In addition, the boys take karate and engineering classes and are members of a local co-op.

"The access to history here in Europe is beyond comprehension. We have seen the actual code of Hammurabi, Winged Victory, and the Mona Lisa," Jason said. "We’ve walked through Monet’s Garden and then traveled to see original paintings when we studied the Impressionists. We recently studied the French Revolution and, as a capstone project, went to Paris where the kids had put together a walking tour of the important sites from the Revolution," he added. "We coordinated our visit to coincide with Bastille Day and we were able to see the French military parade and fireworks under the Eiffel Tower. We get to give the boys a truly global education. I also teach math and science for two local universities that serve the military population. I couldn’t be happier in my new roles," said Jason.

The Backs "love and are surprised" by Germany. "It has been so much different than we expected. It is green and lush and welcoming," Molly said. "The people here are inclusive and kind. We walk or bike all the time. Most days my kids walk down to play with the neighbors, help feed the local horses, or ride their scooters to the neighborhood playground. On days that I don’t have to work, we travel."

Molly said Luxembourg is about an hour away, as is Heidelberg and Trier. "The boys have played on the beaches of Normandy, climbed Medieval City walls, walked through tulips in Holland, and seen the Egyptian Book of the Dead in the Louvre." The Backs can order food in about five languages and would like to learn more. "In short, this was one of the best decisions we have ever made as a family. We miss our families in the states, but the difficult transition and temporary time apart from relatives finally feels worth it as we settle into a European lifestyle," said Molly.

What's next for the Back family? They have trips planned to visit Spain, London, and Greece. Friends from UAH recently joined them for Oktoberfest. In the winter, Molly said, Christmas markets will pop up in all the villages and festivals will welcome the start of the holidays.

"Our summer garden is giving us roses and lavender and tomatoes. My youngest will start a German kindergarten this fall and the older boys will continue with their homeschooling," Molly said. "I’m sure I will fly back stateside with a patient before long. Mostly the easy, calm pace of life that has become our new normal will continue."