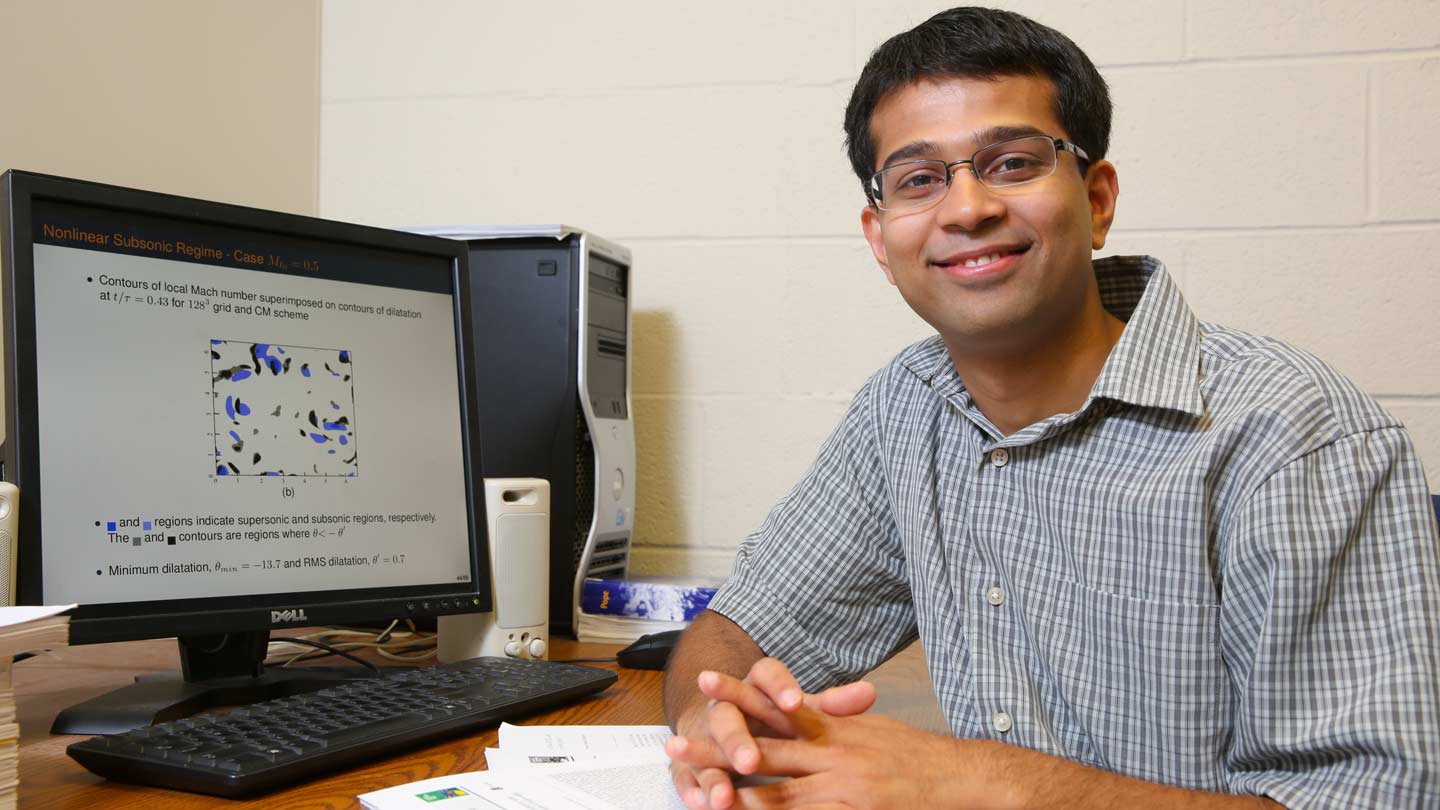 UAH alumnus Dr. Shreyas Bidadi will spend the next year as a Marie Curie postdoctoral fellow at the European Centre for Research and Advanced Training in Scientific Computation (CERFACS) in Toulouse, France.

Dr. Shreyas Bidadi, who earned his Ph.D. in mechanical engineering from The University of Alabama in Huntsville (UAH) last month, was recently selected for the prestigious Marie Curie postdoctoral fellowship at the European Centre for Research and Advanced Training in Scientific Computation (CERFACS). For the next year, he will join researchers from five academic institutions in Europe to develop advanced numerical techniques for predicting aircraft noise, part of a larger European effort to reduce noise emissions from jet engines by 50%.

Dr. Bidadi says he was just a child when his imagination was captured by "mankind's quest to explore our planet, the solar system, and beyond." He later earned a bachelor's degree in space engineering from York University in Toronto and then a master's degree in aeronautics at Purdue University before learning about UAH's doctoral program in mechanical engineering.

"I first heard about the program from the director of Purdue's propulsion lab," says Dr. Bidadi. That led to a campus visit in the spring of 2011, where he met with Dr. Robert Frederick, Director of UAH's Propulsion Research Center. "Based on his advice encouraging me to pursue a Ph.D. here and the strong ties UAH has to the aerospace and defense industries, I decided to stay on."

I’m excited to conduct research in a city that is at the forefront of developing the next generation of jet and rocket engines.

For his doctoral research, Dr. Bidadi built upon work he had done at Purdue on numerical simulations of complex fluid flow motion. As he explains, with no clear understanding of what triggers turbulence, it's difficult to predict turbulent flows with any degree of reliability. Furthermore, in computational simulations of such flows, errors are introduced that can significantly reduce the accuracy of results. Hence, he says, "the goal of my research was to develop a methodology to quantify the effects of numerical errors an to investigate ways to minimize their impact on the flow without compromising on the stability of the numerical algorithm."

That ultimately resulted in the publication of two articles (and one upcoming one) in the prestigious Journal of Computational Physics: "Investigation of numerical viscosities and dissipation rates of second-order TVD-MUSCL schemes for implicit large-eddy simulation" and "Quantification of numerical diffusivity due to TVD schemes in the advection equation," both of which he co-wrote with Dr. Sarma Rani, Assistant Professor of Mechanical and Aerospace Engineering.

But while those articles no doubt contributed to Dr. Bidadi's growing reputation as a respected researcher, it was a chance encounter at Princeton University that led to him learning about - and landing - the CERFACS position. There for a weeklong summer program on combustion, he attended a series of lectures by Dr. Thierry Poinsot, research director of the Institute of Fluid Mechanics of Toulouse and a scientific advisor for CERFACS' Computational Fluid Dynamics group.

"His talks included a number of examples on the work being conducted at CERFACS," says Dr. Bidadi. "I was impressed by the capability of their codes to perform complex flow simulations of jet engines." He ended up sending his resume to Dr. Poinsot and inquiring about possible research opportunities at CERFACS. "A few weeks later, I had a phone interview with two of its senior researchers," he says. "And immediately after the interview, Dr. Poinsot contacted me to offer me the fellowship."

Now Dr. Bidadi will make his first trip to France, heading to the southern city of Toulouse to take up his position at CERFACS. Though much larger than Huntsville, it also boasts a rich history of space exploration. "It's at the heart of the European aerospace industry and is also home to Europe's largest space center," he says. "So I'm excited to conduct research in a city that is at the forefront of developing the next generation of jet and rocket engines."

That research is sure to be complex, but nothing Dr. Bidadi can't handle from his many years of experience in the field. Rather, the real challenge will come outside of the lab. "I suspect communicating with the locals will be difficult," he says with a laugh. "I have a fairly limited knowledge of French, but I am very keen to learn the language during my stay there!"