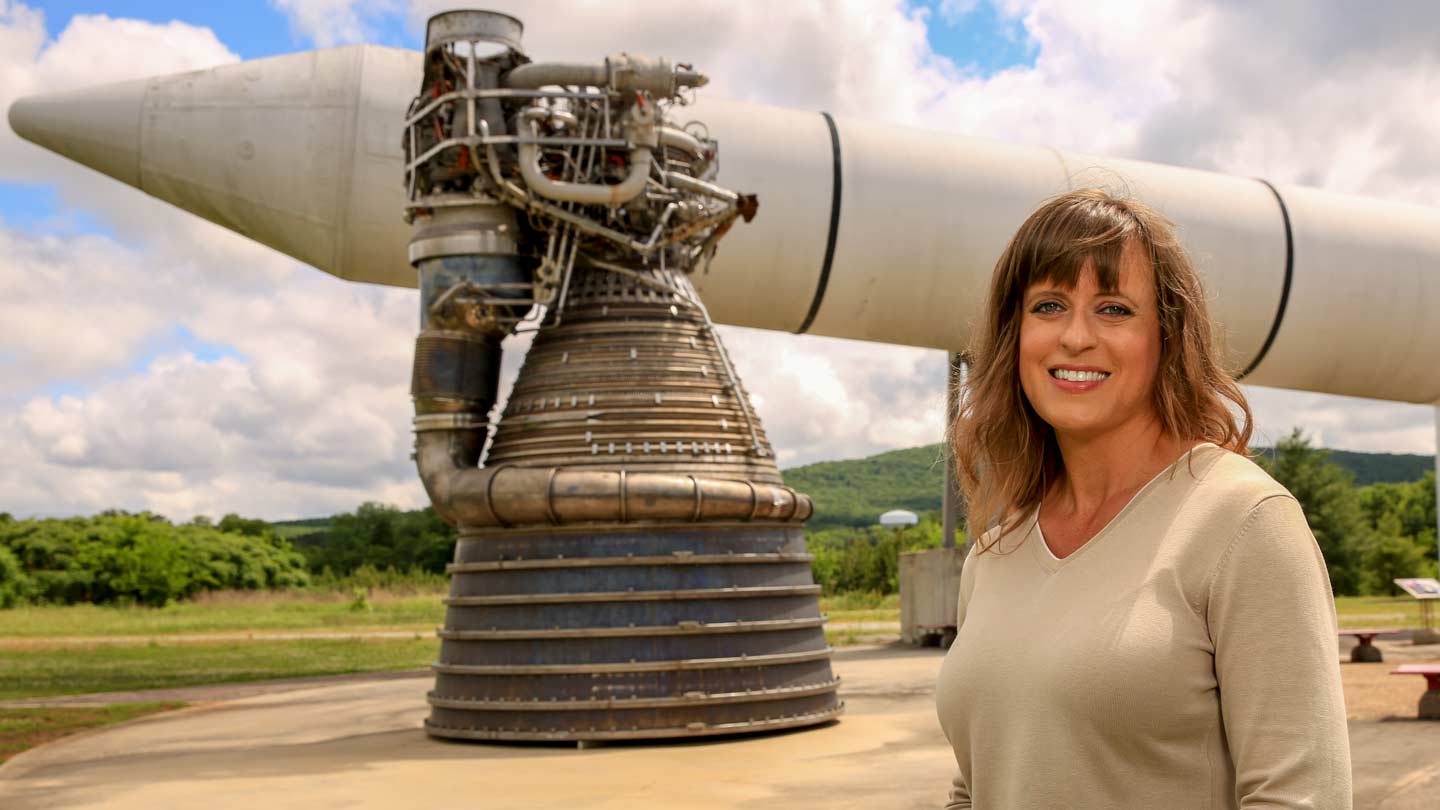 Teams led by Julia Khodabandeh will soon be ramping up activity for the next full-scale static motor test.

It’s going to take a heavy lift to get NASA’s Space Launch System (SLS) off the ground and eventually headed for Mars, and an alumna of The University of Alabama in Huntsville (UAH) is boosting that effort.

"QM-1 was the highlight of my career so far, and I received NASA’s Space Flight Awareness Award in August 2015," she says. "In 2016, I competed and was selected for a career advancement assignment at NASA Headquarters (HQ) in Washington, D.C."

There, she reported to the NASA chief of staff and worked with the NASA administrators as facilitator of their programmatic and institutional governing councils.

"During my HQ assignment, I was chosen to be acting director of the Office of Agency Council staff. My time at HQ was the busiest time in the agency’s history of council governance."

Khodabandeh returned to MSFC in 2017 and she is currently managing the final assembly and transportation of 10 solid rocket motor segments in support of the first two SLS flight vehicles, EM-1 and EM-2.

"I am also managing the design, manufacture and certification effort for pyrotechnic motor ignition beyond EM-2," she says. "My teams will soon be ramping up activity for the next full-scale static motor test, currently scheduled for 2020."

Designed by Orbital ATK (OATK), each SLS booster consists of five solid rocket motor segments. With 25 percent more fuel than the Space Shuttle’s four-segment motor design, the SLS boosters are the largest and most powerful in the world. The boosters will ignite at T-0 and burn for just over 2 minutes to lift the SLS vehicle off the launch pad.

Together, the SLS twin boosters Khodabandeh and her teams are working with will provide more than 75 percent of the total thrust at launch.

"What keeps it interesting for me is the opportunity to process flight hardware and get it ready for rail shipment from Corrine, Utah, to Kennedy Space Center (KSC) in Florida," she says.

"In the Final Assembly Area, we install the ignitor, nozzle, instrumentation, cable tunnels and harnesses, thermal protection and markings on the segments, among other things. It is so nice to see the flurry of activity and the assembly bays filled with motor segments!"

Currently, five motor segments for the first flight, EM-1, are in storage at OATK’s Promontory, Utah, plant waiting for shipment to KSC. Five additional motor segments are being processed through Final Assembly. Once all 10 are complete, they will be put into individual covered railcars for their trip to KSC.

At KSC, the 10 segments will be stacked into two twin motors, including the forward and aft assemblies, and the boosters will be integrated with the rest of the launch vehicle. Processing has also begun on the 10 motor segments for the second flight, EM-2. The first four EM-2 segments are going through x-ray and ultrasonic motor inspections now, and soon will move to the Final Assembly Area.

"The most exciting development in my area was the static test stand upgrades to accommodate the five-segment test motor with its increased thrust, length and weight," she says.

The stand’s control avionics and forward and aft components were also upgraded from the Shuttle program. A mid-span support system was designed, manufactured and installed to help lift the middle portion of the horizontal motor prior to firing, as its length and weight cause it to sag.

She first worked on solid rocket motors in a UAH senior design project while getting her bachelor’s degree, Khodabandeh says, and UAH’s proximity to MSFC allowed her to gain aerospace experience while still getting her education.

"After hiring on at NASA’s MSFC, I received my MS degree from UAH while participating in MSFC’s Full-time Study Program. I had several UAH professors who were Dr. Wernher von Braun era experts, and their insight and advice on flight vehicle design was invaluable!"

"Dr. Frederick truly enjoyed his work and cared about his students. He didn’t just teach the theory, but also taught practical application in tremendously creative ways," Khodabandeh says. "He expected us to pay attention and do our best work, but he was always kind and genuine."

One of the first great pieces of advice she received was from Dr. Frederick, she says. "He said, ‘Never burn bridges. One day you’re an employee, the next day you’re the boss, the next day one of your employees is your boss. It’s how it goes.’"

That advice has come in handy.

"When I graduated UAH with my BS, I had a skill set I thought was pretty important and complete. I had an excellent work ethic, I was intelligent and I was very efficient. Things were going great at work, and it wasn’t long before I was turned loose and given significant responsibilities for my experience level," she says.

"Like many new graduates, I thought I was going into my new gigs reasonably prepared for the job. And then reality hit. I was working on a project team and, over time, major conflict developed. The project stakes were very high. I’d never experienced either of these before, and now I was in the middle of both."

The project ended up being highly successful, technically, and far exceeded the performance requirements. But the team’s performance was highly dysfunctional.

"A powerful lesson from this course is on respect. They tell us, ‘Respect is like air. You don’t really notice it until it’s not there – and then it’s all you notice,’" she says.

"We can’t control other people, but we can control how we respond to other people. When it matters the most though, our emotions kick in, and we often do our worst. Our automatic reaction is to give in or dig in. But both of these are incorrect responses. We should learn how to respond to deterioration quickly by stepping back, coming up with a mutually beneficial resolution and returning to healthy dialogue."

Her training taught that there are always variations to a problem solution and multiple ways to get to a particular solution. Peace is more important than winning an argument or getting your way.

"You don’t have to be your teammates’ best friend," Khodabandeh says. "Sometimes, you may not even like a teammate and that’s OK. But always treat them with respect."

Filled with successes, Khodabandeh’s life was then upended by the loss of her 21-year-old son, a junior at University of Alabama in Tuscaloosa, to an accidental drug overdose.

"For many years I thought having a great education and job, a nice home and vehicles, and a healthy savings account were measure of life’s success," she says. Her son’s death ushered in a change.

"I thought he was partying in ways that he shouldn’t, and needed to grow up and just stop. I didn’t understand addiction," Khodabandeh says. "In healing my grief, I’m learning about addiction and recovery."

She’s now a member of the board of directors for the YMCA, a volunteer with the Celebrate Recovery Program at the Rock Family Worship Center and the Catholic Calix Society, and has begun working on counselor certifications with both the Association of Certified Biblical Counselors and the Alabama Alcohol and Drug Abuse Association.

"In serving and advocating for other young adults who are struggling, I listen to their stories and think to myself, ‘What in the world have I been tossed into?’" And the answer comes, ‘This is life!’" she says. "Reaching out, helping those in need, giving to others without return – I now view these things as the true measures of life’s success."