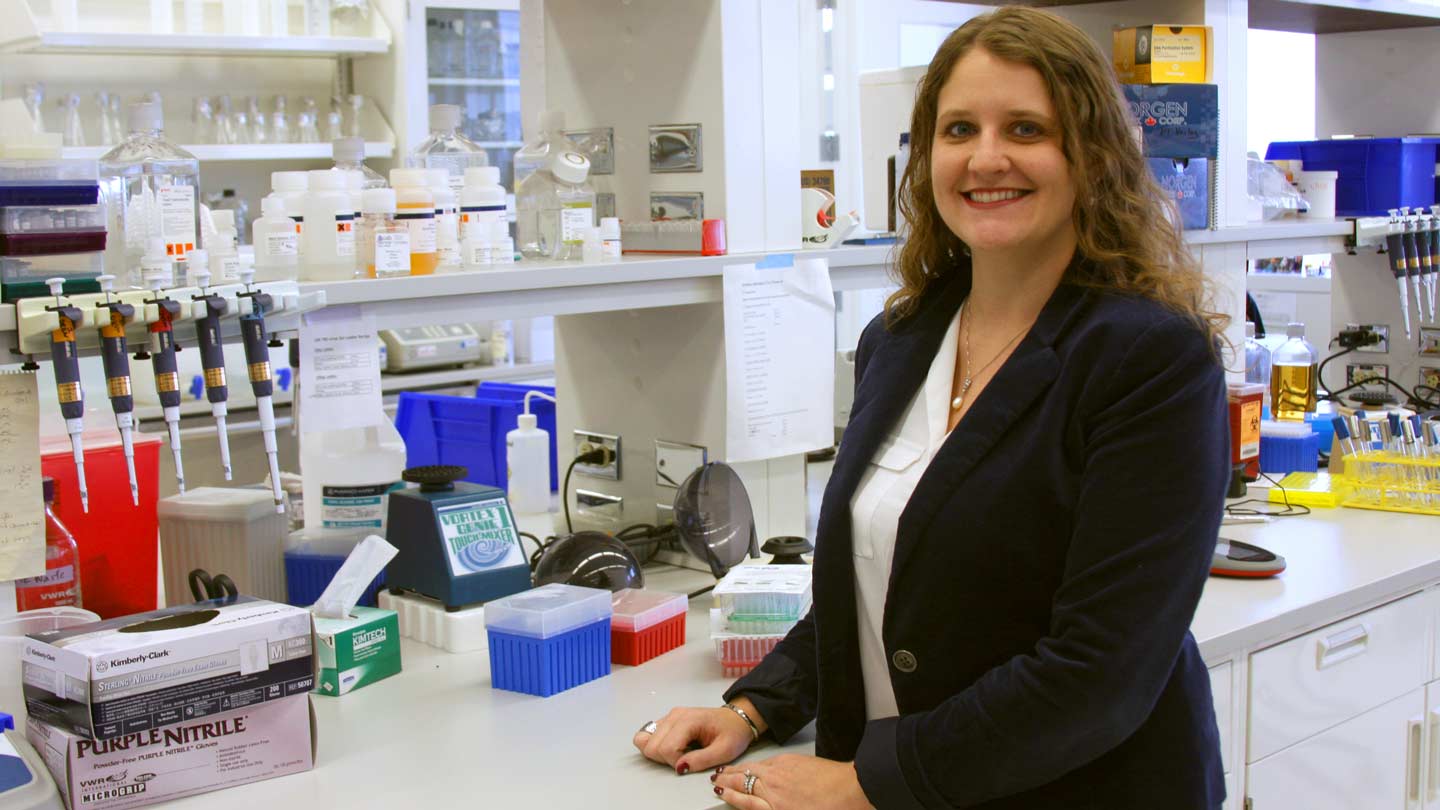 The University of Alabama in Huntsville (UAH) and the HudsonAlpha Institute for Biotechnology have long enjoyed a strong and mutually beneficial partnership. UAH professors serve as adjunct faculty at the Institute, undergraduate and graduate students take part in its research projects and internship programs, and alumni enjoy employment in the Institute labs or with the associate companies that call the 152-acre biotech campus home.

Among the latter is Dr. Brittany Lasseigne (pronounced "la-SANE"), who recently received her Ph.D. in Biotechnology and Science Engineering and is now working as a post-doctoral fellow in the Myers Laboratory. "I think the combination of UAH and HudsonAlpha let me take advantage of opportunities at both," she says. "I was prepared for my post-doc position and I knew that was what I wanted to do next."

Dr. Lasseigne and her husband originally moved to Huntsville in 2008; he had landed a position in the defense industry and she was considering either graduate school or medical school. "I was trying to decide the right fit so I enrolled in UAH's master of science in biology program," says Dr. Lasseigne, who earned a bachelor's degree in biological engineering from Mississippi State. "But after a semester, it was clear I wanted to get a Ph.D.!"

In a serendipitous turn of events, it was around this same time that she attended a seminar given by Dr. Richard Myers at the then newly constructed HudsonAlpha Institute for Biotechnology. Myers, who currently serves as the Institute's president and a faculty investigator, focuses on genomic and genetic analysis of human traits and diseases.

The pair was introduced by Dr. Joe Ng, associate professor in UAH's Department of Biological Sciences and founder of HudsonAlpha associate company iXpressGenes; soon after, Dr. Myers invited Dr. Lasseigne to work in his lab. "Rick had a collaboration with Dr. Jim Brooks at Stanford to look at genomics in kidney cancer, so I started working on it and that's what I did for the entirety of my graduate work," she says.

I think the combination of UAH and HudsonAlpha let me take advantage of opportunities at both.

Dr. Lasseigne's responsibilities included conducting experiments to measure the genomic changes between kidney normal and tumor tissues and then analyzing the extremely large datasets those experiments yielded. "I learned how to program in a couple of different computer languages and analyze the data in a way that was biologically and statistically meaningful," she says.

It also enabled her to secure a spot as a post-doctoral fellow in the Myers Laboratory after she'd earned her Ph.D. in December of 2013. "A post-doc is like a residency for a medical doctor," she says. "You often need to learn more skill sets before you can be on your own, so it's a way to get more experience after graduate school. You have more responsibility than a graduate student but you're not running your own lab."

As before, Dr. Lasseigne is researching genomic differences between normal and tumor tissue. But now her focus is on finding a way to use those differences to make early cancer diagnoses and monitor recurrence. "The markers we found were specifically in tissue, but we think it would be possible to detect them in urine and blood," she says.

She's also expanding her scope to include psychiatric and neurodegenerative diseases - which means her 40 hours a week in the lab sometimes stretch into 60. "It's like grad school on steroids!" she laughs about the workload. Fortunately, there's also a lot of motivation. "At HudsonAlpha we always say 'patients are waiting,' so when we find something that has utility, we want to keep going."

Where it will take her next, however, has yet to be determined. By their nature, post-docs are temporary positions and Dr. Lasseigne anticipates she will only need 3 to 4 more years to acquire the skills she will need for her next job. "I would like to stay in academic science and continue studying the genomics of human disease," she says. "I think a faculty position would be a good fit for me."

That could mean moving to another "big genomics city" like Seattle, Boston, or St. Louis. But it could also mean staying right here in Huntsville, where UAH and HudsonAlpha already offer the combination she's looking for. "I like it here - when you bring a bunch of people together who want to do good science and have the right skill set, you can make a difference," says Dr. Lasseigne. "So I'm open to whatever comes next!"