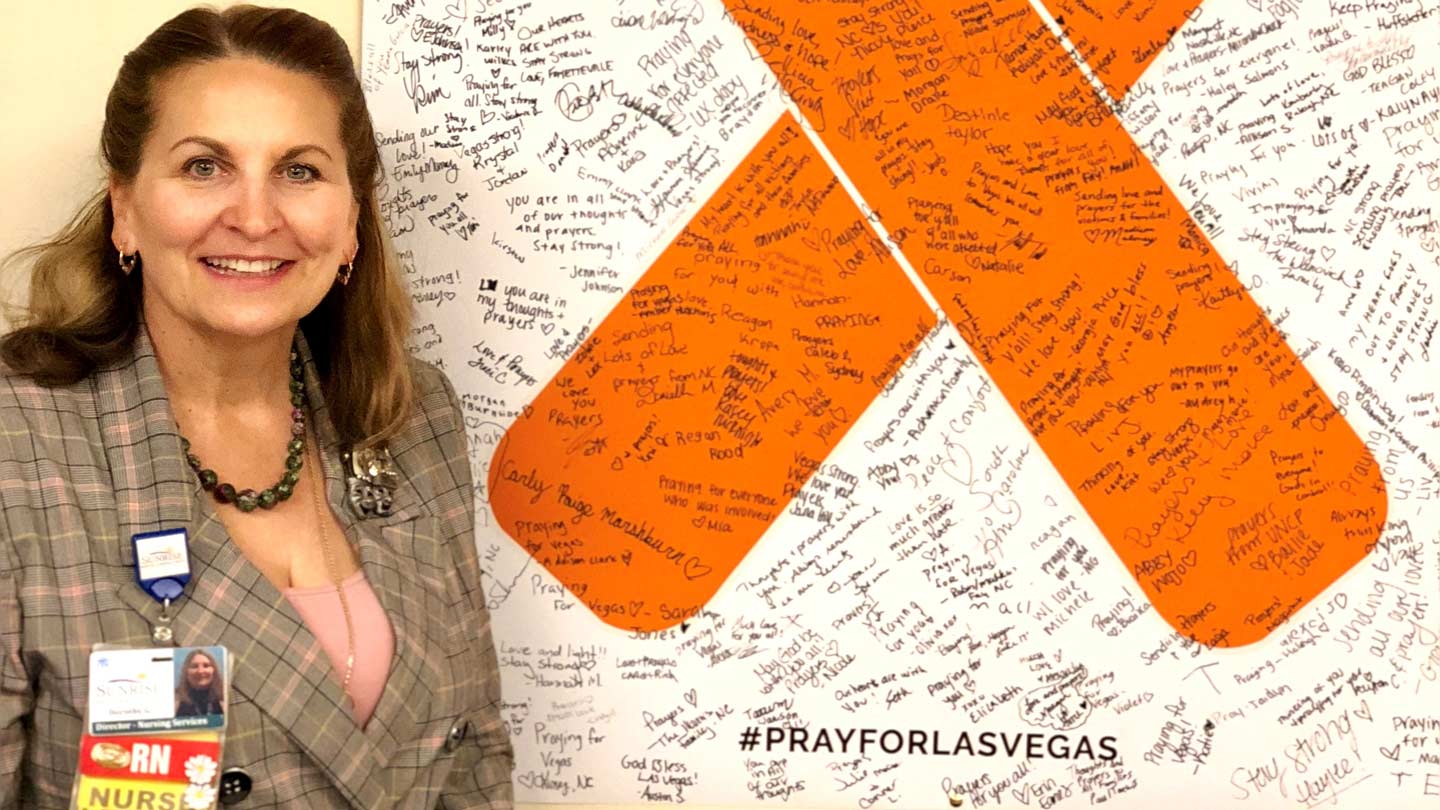 UAH nursing alumna Dorothy "Dotti" Grillo standing beside a poster Sunrise Hospital received days after the mass shooting. The posters, from across the country and abroad are filled with positive, inspiring messages.

On that fateful night, a lone gunman opened fire on more than 20,000 people attending the Route 91 Harvest Festival from his hotel suite on the 32nd floor. Nearly three hours later, 58 people were dead and more than 500 were wounded.

Most of the gunshot victims were taken to Sunrise Hospital and Medical Center, a Level II Trauma Center where Grillo, an alumna of The University of Alabama in Huntsville (UAH) College of Nursing, is a med-surg nursing director.

"I feel God guides our choices in life and puts us where we need to be at the time we need to be there. The knowledge I gained during the last two years earning my DNP at UAH prepared me for the lead I took that night," Grillo said.

Chaos began in the Sunrise Hospital ED shortly after 10 p.m. Only minutes before, Grillo’s son, a Las Vegas Metropolitan Police officer, called to alert her there had been a mass casualty shooting on the Las Vegas strip, and many critically injured people were en route to Sunrise. Grillo hurried into the hospital to help. 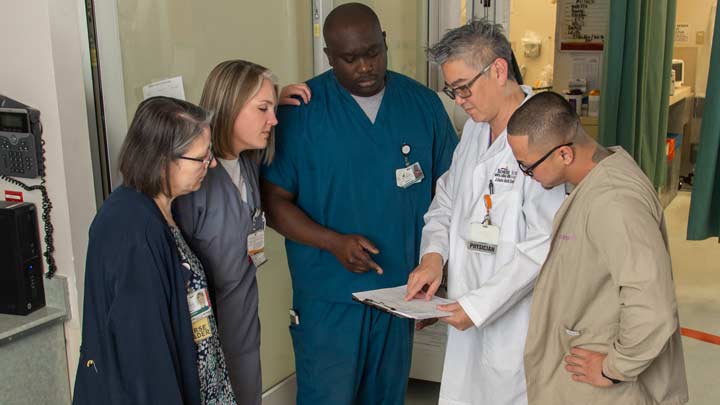 The multidisciplinary team at Sunrise Hospital worked the night of Oct. 1, 2017. All members pictured are still part of the hospital care team.

As it turned out, Grillo and her children were within a five-mile radius of where the mass shooting occurred. After hearing from her son, Grillo called her daughter who was getting off shift at a hotel/casino on the strip and advised her to stay at work until it was safe to leave.

"At the time, it was believed the shooter had moved to other hotels and casinos, so the authorities closed the strip," Grillo said. Her husband, a retired federal agent, set-up a command center at home so that he could communicate with family members by passing along news updates and other pertinent information.

"As with all emergency triage situations, a command center was established within the hospital and staff fell into the roles they were best prepared to handle," Grillo said. Sunrise received the largest number of patients (242) that night from the mass casualty incident and continued to care for community patients as well.

"I can only describe the hospital ED as a war scene…something you would see in the movies. There were patients everywhere and people just kept coming through the doors. Ambulances, cars, and trucks were lined up and unloading wounded people, some fatally injured," she said.

To defuse the chaotic scene, Grillo began re-assessing previously admitted patients from intensive care units (ICU) to medical-surgery units allowing space for incoming patients to the ICUs. "I worked with the critical care and the med-surg staff to ensure patients were transferred to other areas of the hospital where they could be safely treated. Once that process was underway, I went back down to the ED to assist with matching patients with family members. Nearly 100 patients arrived at the hospital with no identification that night," said Grillo.

Sunrise treated 124 gunshot wounds and numerous other injuries that occurred as people tried to flee the gunfire. In addition, more than 100 physicians and over 200 nurses responded to the hospital to assist.

"We now know that incident was the largest mass shooting in modern American history," said Grillo. "There was no time to think or feel as I went through the motions of the night. If I had let myself think about my son heading into an active shooter situation or my daughter being in the situation where her hotel/casino could be the shooter’s next stop, I do not know if I would have been able to make the decisions I made to safely care for patients or help as many patients reconnect with their families as I did that night. It was my training, as a nurse, which allowed me to be effective in this situation."

Grillo, a native of New York, realized nursing would be a lifetime career in her teens. "I was a candy striper in middle and high school." She graduated both high school and trade school at the same time earning the ability to test for her license as a Practical Nurse. "From that point on I kept advancing my academic degrees, earning an ASN, BSN, MSN, and finally my DNP. I do not believe education ever ends for a nurse. I have never regretted my decision to become a nurse."

She started her career in nursing homes. Through the years she has held many leadership roles including Director of Nursing Services, Director of Performance Improvement, Director of Infection Control, and Regional Director of Professional Services. "While my strength is leadership and management I guess you could say my specialty is my passion for advancing the nursing profession."

After the family moved to Henderson, NV, several years ago, Grillo decided to return to school to earn a doctoral nursing degree. "I started researching universities that offered online DNP programs. Several university programs popped up in my search engine. As I started reviewing their philosophies and program requirements I did not feel they were a good fit for me. As I continued my search I found the UAH College of Nursing website.

"The DNP program at UAH prepared me to take a lead role at Sunrise the night of the incident. I had the knowledge and ability to make decisions and to guide others as we worked, providing quality care for large numbers of patients in areas of the hospital that are not normally used to treat patients," said Grillo.

"The UAH instructors I had during my courses challenged me to look beyond what I was familiar with to grow my experience in other areas of nursing. This proved to be extremely valuable that night, because the patients who came through our doors were every age and nationality, and had a wide variety of medical needs."

As a trauma facility, Grillo said Sunrise routinely conducts mass casualty drills. "But I do not think anyone could have predicted what we experienced that night. What we learned is that our iMobile communication system allowed for rapid mobilization of staff and ease of communication which is key in any trauma situation," she noted. "We also tested the strength of our color triage system which proved to be effective in prioritizing the patients. And, we also learned that RN involvement with the patients and teamwork was our keys to success."

On a personal note, Grillo said last year’s events brought back the fear she felt when two national terror events occurred involving her husband — her husband was in the World Trade Center when a parking lot van explosion occurred in February 1993, and the events of 9/11 affected many family members and friends. Additionally, there is the daily worry of being the mother of a son who is a police officer in a major US city.

Grillo said there was a tremendous outpouring of love and support from all over the country and internationally following the Las Vegas shooting. "From the food, water, and clothes that were donated, to the posters we received and proudly post with encouraging messages, to the support services provided by the hospital, the visits from therapy animals, visits from Mickey and Minnie Mouse, to the many performances by Musician’s On Call we feel supported and cared for as we healed."

Last month, the hospital welcomed back patients from the Route 91 Harvest Festival shooting to celebrate their survival, reconnect and remember those who lost their lives in the tragedy. "As I welcomed more than 30 survivors and served several of them and their family members that day, we shared tears and hugs and as we move forward in our healing." Also sharing in the celebration were physicians, first responders, and other community partners who played an integral role in care delivery that night and many days into the following months.

Grillo said following the shooting, Sunrise Hospital completed a lesson learned assessment and found there were areas of opportunities to improve and those areas have already been addressed.

"Hospitals cannot function without nurses. That was never more evident than on the night of Oct. 1, 2017," said Grillo. "That night reminded me of why I became a nurse so many years ago, why I go to work every day, and why I model everything I do around ensuring that nurses are recognized as the professionals they are and receive the respect they deserve.

"As an American citizen I am proud to be in a country where all types of people band together to support and help one another without being asked to help, and without expecting anything in return. God Bless America. We are #SunriseStrong, #VegasStrong."