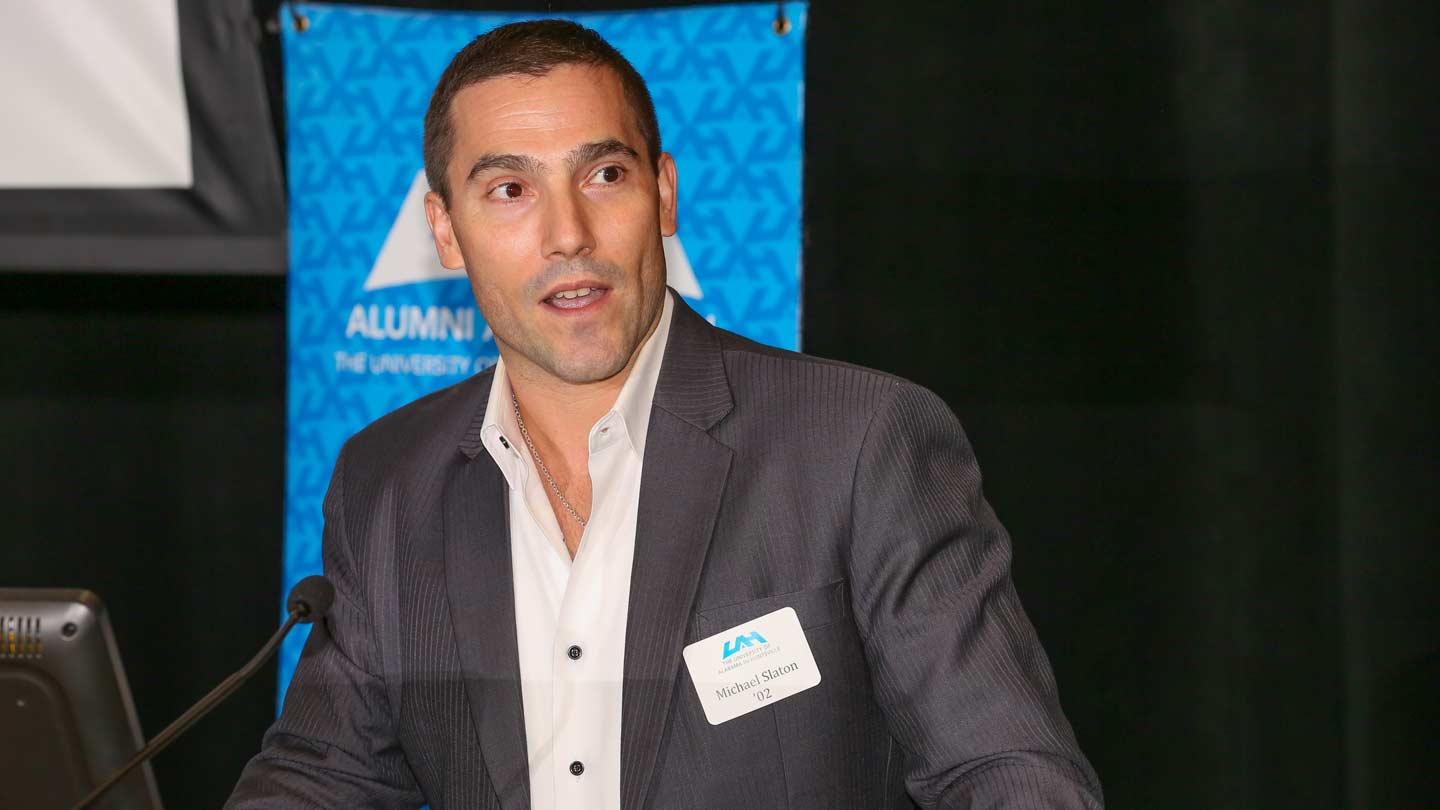 Michael Slaton (BA, FLIT '02) made one of the most important decisions of his life in The University of Alabama in Huntsville (UAH) Charger Cafe. "The decision I made in the university's cafeteria has had a profound impact on my career and life."

After delaying the decision for as long as he could, it was time for Slaton and a few of his UAH hockey teammates to declare a major. "We sat in the cafeteria with a counselor and the university academic handbook, for more than an hour, discussing majors and career opportunities," he said. "Ultimately, we chose Foreign Language and International Trade (FLIT), because each of us had substantial experience with foreign languages and we were inspired by future travel opportunities."

Before attending UAH, Slaton was pursuing a hockey career in the USA Hockey Junior A ranks, hoping to earn an NCAA Division I hockey scholarship. "One of my teammates and close friends, Steve Briere (BS, MKT '00, MBA, MGMT '08), had committed to UAH the prior year, and was enjoying his experience so much that he put me in touch with the UAH coaches. After visiting the campus, speaking with academic and athletic counselors, and meeting the guys on the hockey team (many of whom I'm still in touch with today), I was convinced UAH was the right choice for me."

After graduating from UAH in 2002, Slaton joined Northwest Airlines (NWA) as a Financial Analyst (first based at the Company's Global Headquarters in Minneapolis, and then its Asia Pacific Headquarters in Tokyo, Japan). In April 2008, NWA and Delta Air Lines, Inc., merged, becoming the world's largest airline carrier. Slaton, then Senior Manager of Sales Planning and Analysis remained with the company for one more year. In 2009, Slaton joined Hilton Worldwide, one of the world's largest hospitality companies, as Director of Finance for Commercial Services. In six short years, he has been promoted four times and now serves as Vice President Finance, Asia Pacific.

In his current position, Slaton is Hilton's senior executive responsible for all financial functions throughout one of Hilton's highest growth regions, which currently features over 150 hotels in locations including China, India, Japan, Southeast Asia, and Australia, and with a pipeline of over 270 hotels scheduled to open in the next few years. He is married to Ramala Sherchan Slaton, and they are the parents of three daughters.

Slaton credits his UAH academic studies and his exposure to learned, caring faculty, for allowing him to "pursue diverse career and life experiences" to date. "I was fortunate enough to develop close relationships with several professors throughout the College of Arts, Humanities and Social Sciences (CAHS, formerly the College of Liberal Arts) and the College of Business Administration, often taking numerous courses taught by each over the years," Slaton said.

"Dr. Kathy Hawk is a very influential Professor of Political Science. I enjoyed her courses immensely because they had both real-world implications, as well as practical cultural applications that I refer to even now in my professional life," Slaton said. "Dr. Donna Reed, (adjunct) Professor of Accounting and Finance, and Director of Internal Audit, was both a teacher and an advisor to me, helping me understand the basics of Accounting but more importantly, the broader basics of business." Slaton said it was Reed who introduced him to Dr. Dorla Evans, Professor Emerita of Finance, who taught only one of Slaton's courses but "whose willingness to give her time and energy to me has had a lasting impact on my career."

Slaton earned a Master of Business Administration degree from McGill University in Canada. He is a frequent volunteer and supports numerous philanthropic endeavors serving as a volunteer hockey coach for youth programs in Minneapolis, Tokyo and Singapore, raised more than $10,000 for the Make-A-Wish Foundation, participated in numerous events sponsored by the National Brain Tumor Society, and need-based organizations such as Father Joe's Orphanage (Thailand), Oz Harvest Meals (Australia), Goonj (India), and most recently led a group that traveled to Ban Ao Kung (Phuket, Thailand) to help plant mangroves and protect the local marine community. Finally, Slaton regularly travels to schools and institutions around the world to speak to aspiring students about educational and career opportunities.

"I chose to attend UAH because of its reputation for a quality education, as well as the opportunity to wear the UAH hockey jersey and represent my school. To be recognized by my peers and teachers/mentors as an Alumni of Achievement is something I never would have imagined, and for which I am very grateful."