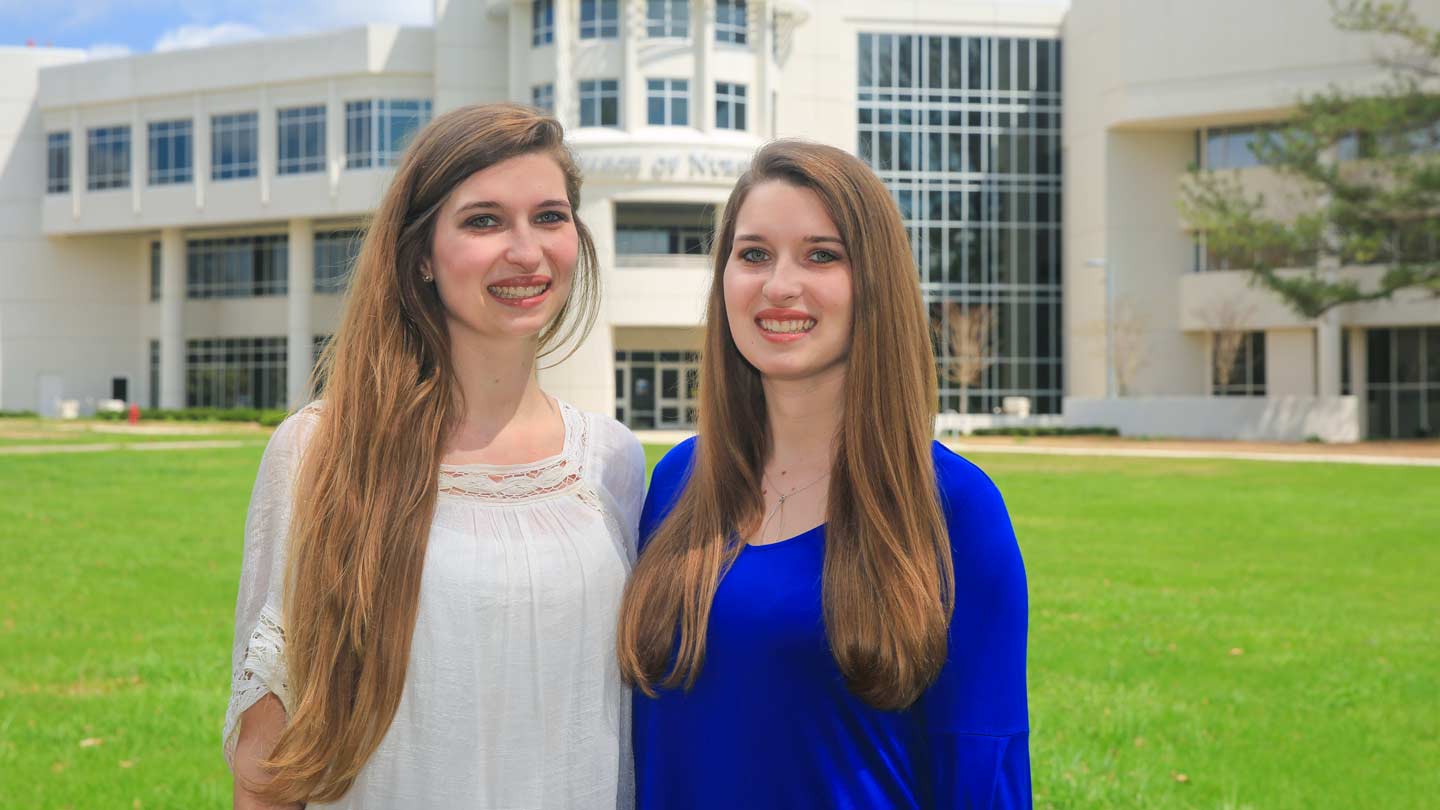 Twin sisters Colette and Kelsey Reynolds are both students in the UAH College of Nursing’s RN-BSN program.

While some identical twins may choose to take deliberately divergent paths to avoid being constantly mistaken for one another, Kelsey and Colette Reynolds have instead doubled down. Rather then splitting up for college, both decided to attend The University of Alabama in Huntsville (UAH) and major in the same subject: nursing. "Our instructors try to separate us to avoid confusion," says Kelsey with a laugh. "And we never get the same patients so we don’t confuse them." Even still, adds Colette, mix-ups are inevitable. "When it does happen, we try to do whatever is needed, just to be polite!"

Born and raised in Huntsville, the Reynoldses excelled in science and anatomy in high school. But with no defined career plans other than "helping and serving people," says Kelsey, it was anyone’s guess where they’d end up pursuing their education. Indeed, Colette says she even considered "going off somewhere" on her own, before the pair homed in on the field of nursing and enrolled in Calhoun Community College to complete their pre-requisites. "We knew that it would give us a lot of opportunities, and what better way to help and serve people than the nursing field?" says Kelsey.

As twins, you always have a lifelong best friend.

Two years later, they were faced with another crossroads: where to get their Bachelor of Science in nursing (BSN). Enter the BSN program at UAH’s College of Nursing. "We didn’t really want to separate, and UAH just seemed like the right fit," says Colette. "We’d also heard a lot of good things about the College, and they had recently introduced a brand-new program that would let us get our BSN in just a few semesters." Add to that the fact that both received transfer scholarships from UAH, and the decision was easy.

Now only a semester away from graduation, both say it was also the right one. "It was definitely hard, especially at first, but it’s been a good experience," says Colette. "Our instructors say, ‘Don’t let anyone tell you that you can’t do something.’ You just have to get over the hump and be confident." And there’s no substitute for the appreciation and gratitude they receive from their patients, says Kelsey. "They know they can trust you and that you care about them – that really makes me happy."

Whether those patients can actually tell the Reynoldses apart, however, is another question all together! But it’s one the sisters also don’t necessarily need an answer to after so many years of shared experiences. "Our friends get mad when people think of us as the same person, like we’re a package," says Colette. "But it never bothers me. It’s fun being twins." Not surprisingly, Kelsey feels the same way. "We’ve always enjoyed it," she says. "We’ve always been best friends, and that’s what’s nice. As twins, you always have a lifelong best friend."