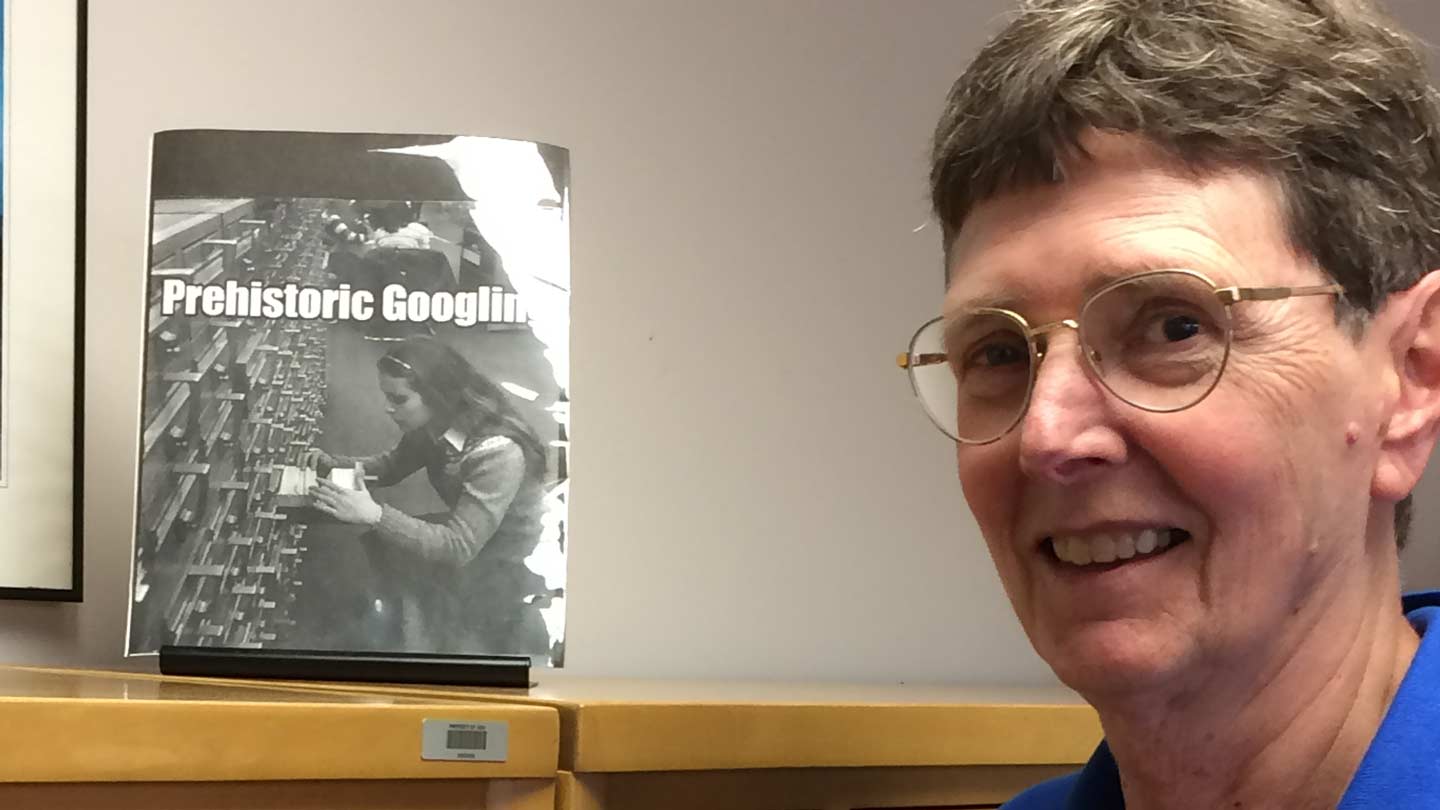 After 35 years of continuous service to UAH, and nearly 50 years as a librarian Susan McCreless will retire on June 1.

Macon's rare snow storm, along with the miracle phone call from The University of Alabama in Huntsville (UAH) was Susan McCreless' "sign" that her employment as a librarian at the university was meant to be.

"It never snows in Macon, Georgia! But it did in 1983," McCreless said. "We had a freaky snow storm of about five inches in late January followed overnight with freezing rain. Everything was shut down for about a week…power and phones lines were down because of the ice. My phone line was buried in snow and ice by a huge tree." Miraculously, McCreless said, three days into the storm her phone rang with the offer of a job at UAH. "After accepting the position, I hung up the phone and attempted to call my family with the news and the line was as dead as could be. I will never know how that UAH call got through, but I just figured it was a sign that this was to be my job."

A native of Hatton, AL, McCreless earned an undergraduate degree in English and Library Science (minor) from The University of North Alabama (UNA), and a Master's in Library Science from Vanderbilt University Peabody College (VUPC).

McCreless' love of English and librarianship began when she was in high school. "I planned on being an English teacher but when I got to UNA, I met two really great library school teachers who made a big impression."

McCreless completed her student teaching, spending half of her instruction time in the library. She also worked in a public Kindergarten through ninth grade school for a year until she attended graduate school at VUPC, where she met a "super" cataloging teacher and McCreless' fate was sealed.

She began her UAH employment at the M. Louis Salmon Library on March 22, 1983, as a cataloger. A few years later, McCreless was promoted to Head of Technical Services. After 35 years of continuous service to the university, and nearly 50 years as a librarian she will retire on June 1.

The Department of Technical Services includes acquisitions, cataloging and serials. "Our job involves behind the scenes working with internal and external computer systems to order, receive, download and upload records and keep all of our online records accurate," McCreless said. "It takes a tremendous amount of attention to small details to keep the information presented in our online systems accurate. In our TS world, accuracy is the only option.

"We order all the library materials—books, journals (online and print); receive and process them to make them shelf ready, verify invoices and process them for payment, create bibliographic records and maintain the catalog," she explained. "For the journals, we have to work with our subscription agent and match up titles, invoices and received issues and do online claiming of missing issues. Basically, everything that is purchased that is information materials goes through our department and gets made ready for public display in the catalog and then ready for checkout by the patrons."

As she prepares to leave, McCreless reflects on her early years as a librarian at UAH.

"All of the information that is now entered in the library catalogs electronically, was typed on a 3x5 index card with a Selectric II typewriter. If you needed 10 copies of the card, you typed it 10 times and then filed it in the library catalog appropriately," she said. "The staff had to come in two hours early to get the filing done before the library opened each day. We thought we had died and gone to heaven when we got our first Xerox Memorywriter which could be programmed to “playback” the card 10 times rather than manually typing the information multiple times."

Now, McCreless said, information goes into the catalog almost instantly. "Once the material is received, it is usually available within a couple of days rather than weeks. We have automated vendor access and no longer have to wait for snail mail to send our orders. So, the process from order submission to shelf ready has been reduced significantly for the patrons."

In McCreless' three decades of service to the university, she has witnessed first-hand some very funny incidents that have taken place at the library. During one of the library's many renovations — dubbed "the move of 1993" the building "got new carpet and maintenance workers used range rovers to move 'whole ranges' at once."

The funniest story yet is the one involving empty beverage and meat cans. "When we cleared the first floor to make room for the Student Success Center, my job was to load book trucks with journals to send to the second floor," McCreless said. "I cleared a shelf and found three or four empty beverage cans stashed behind the bound journals. The next section down, I cleared another shelf and found more beverage cans, and on the shelf just below was empty potted meat cans—all stashed behind the journals."

After nearly five decades of being a librarian, McCreless retirement plans include farming full time.

"When me and my sister were young girls, dad bought a beef cattle farm. He said it was to give us something to do to keep us out of trouble and to pay for our college plus he always wanted one," she said. "We still have that farm which has grown larger and my part time farm job helping my brother-in-law will soon become a full time one. I've got lots of fences to mend!"