HUNTSVILLE, Ala. (Feb. 12, 2013) – When senior aerospace engineering student Blake Parker toured The University of Alabama in Huntsville as a prospect, he was looking for a solid engineering education that offered something more – hands-on experience.

Now in addition to his classes, Parker finds himself a working part of the defense and aerospace field, a type of student immersion that has become a hallmark of UAHuntsville, located in Cummings Research Park – the second-largest such park in the nation – and in the center of the crucible of engineering that is NASA and Redstone Arsenal (RSA).

Now a senior expecting to graduate in December 2013, the 22-year-old Parker is involved with nanosatellite ground support operations as an on-call employee with the university’s Systems Management and Production Center (SMAP) under a UAHuntsville contract with RSA.

“Blake is similar to the large number of students within our program, in that he has a long-term interest in working within the defense industry,” said Dr. Gary Maddux, SMAP director. “He has not only had the opportunity to support SMDC, but has also gotten experience within the test and diagnostic equipment arena.”

The Center was established in 1998 to provide expertise, leadership and support to the U.S. Army, NASA, other governmental agencies and private sector organizations.

“The guiding principle of our program is that students need not only a degree, but also related work experience in order to achieve,” Dr. Maddux said. “ We strive to help all of our students work within their chosen field and within a professional environment so that this experience may be achieved. We are flexible in our policies, but rigid in that we expect high quality work from those who participate.”

Parker’s work with the U.S. Army Space and Missile Defense Command/Army Forces Strategic Command (SMDC/ARSTRAT) involves the assembly and launching of nanosatellites. Prior to his current assignment, he was involved with UAHuntsville’s CubeSat program, a student satellite development project to design, build, test and operate a picosatellite.

A North Alabama native, Parker said the work experience is as real as it gets.

“I’m working with actual hardware. I’m working with seasoned employees and engineers in a mix with students. We’re actually building satellites out there,” he said. ”Some of the people I know out there actually started out where I am now but since they have graduated, now work there.”

Parker said another benefit to total immersion is that the jobs he has performed have helped him to be better prepared for his classes. He mentioned his experience using MATLAB engineering coding software as an example.

Working and attending university classes can be challenging for any student, but Parker knows that in UAHuntsville he has found the correct blend of both that can help him toward success in his field.

“UAHuntsville is just so ingrained with the space agency and defense, so near the action and close to so many companies involved,” Parker said. “That’s a tremendous advantage. I looked at other places I could go, but I ended up here.”

“Our success rate with people leaving the student program within the SMAP Center is extremely high,” said Dr. Maddux. “Over the past seven years, three of every four students that have left the program have remained within the defense industry. That is building the economical base of our city, region and state – and providing an exceptional foundation for our graduates upon which to grow.” 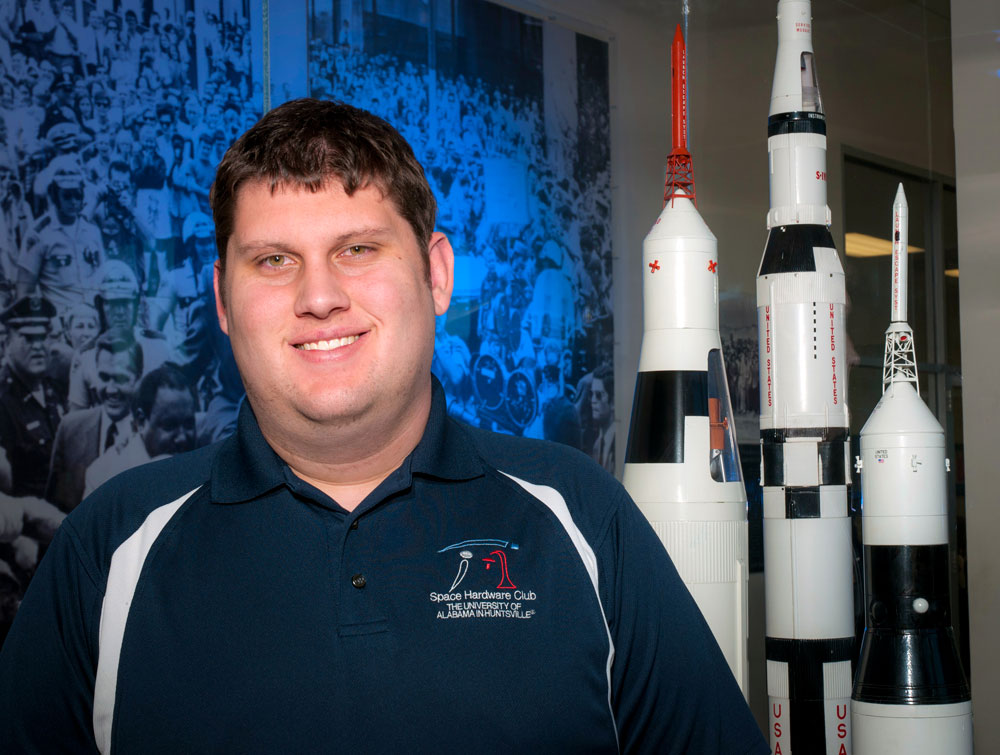 Senior aerospace engineering student Blake Parker is getting a jump-start on his career as an on-call employee with UAHuntsville’s Systems Management and Production Center (SMAP) under a university contract with Redstone Arsenal.

UAHuntsville is just so ingrained with the space agency and defense, so near the action and close to so many companies involved.