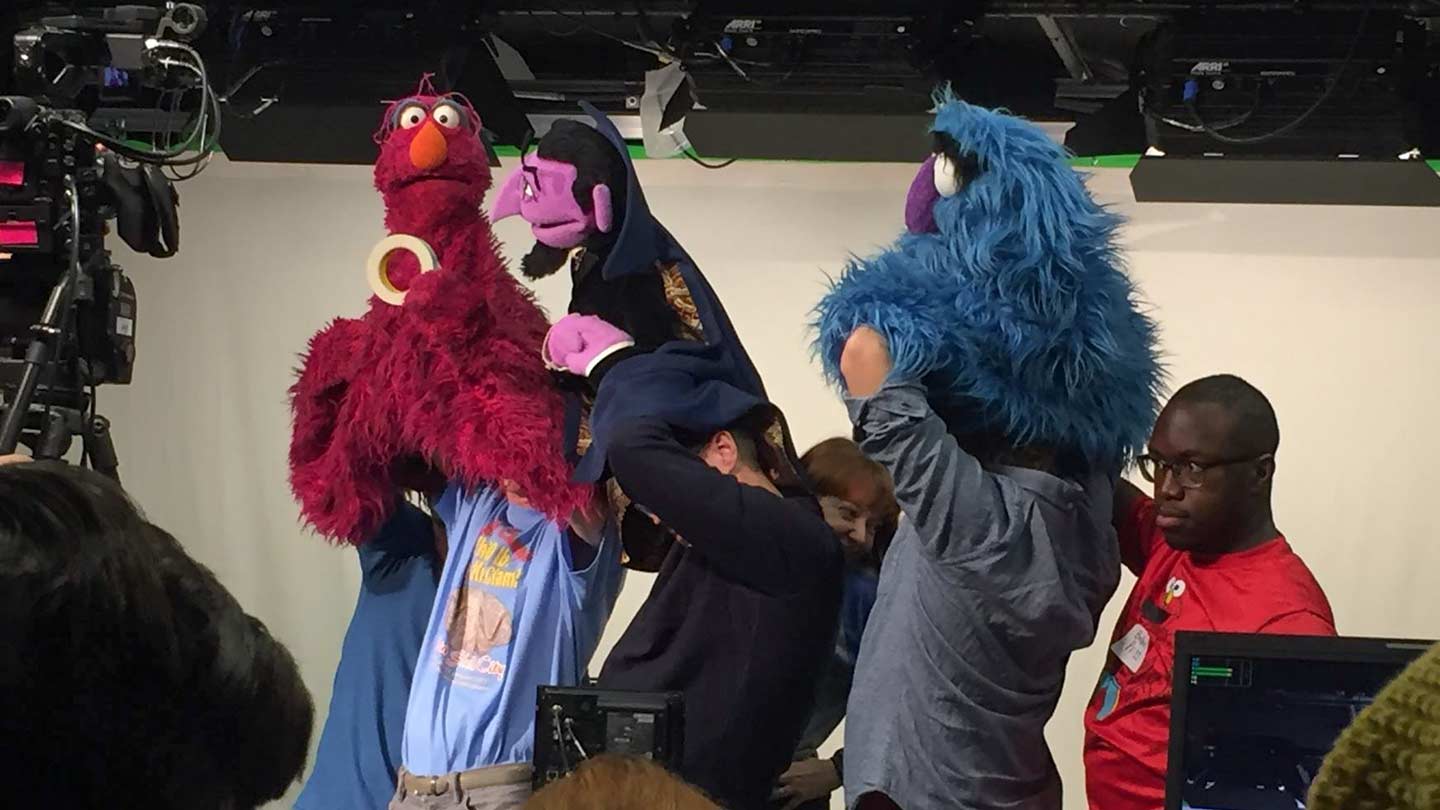 Like most children, Bakari Prigg was entertained by "Sesame Street" from a young age. But unlike most children, what captured his attention was not the puppets but rather the puppeteers responsible for bringing those puppets to life. "I was two years old when I first started liking puppetry," says the junior theatre major at The University of Alabama in Huntsville (UAH). "But I turn 8, 10, 12, and then I’m in high school still liking puppetry! I ended up becoming known as ‘the puppet guy’ after teaching myself."

Once he got to college, however, Prigg made the difficult decision to put his passion for puppetry on hold and dedicate himself to a more traditional career path. "I chose mechanical engineering, thinking it might at least lead to a related job field, like animatronics," he says. "But by sophomore year I realized I wasn’t about that life!" That’s when he turned to David Harwell, associate professor of theatre, for a heart to heart. "I asked him, could I survive with degree in theatre? And he said, ‘Yes, you can!’ So I changed my major and now I’m strictly doing theatre." 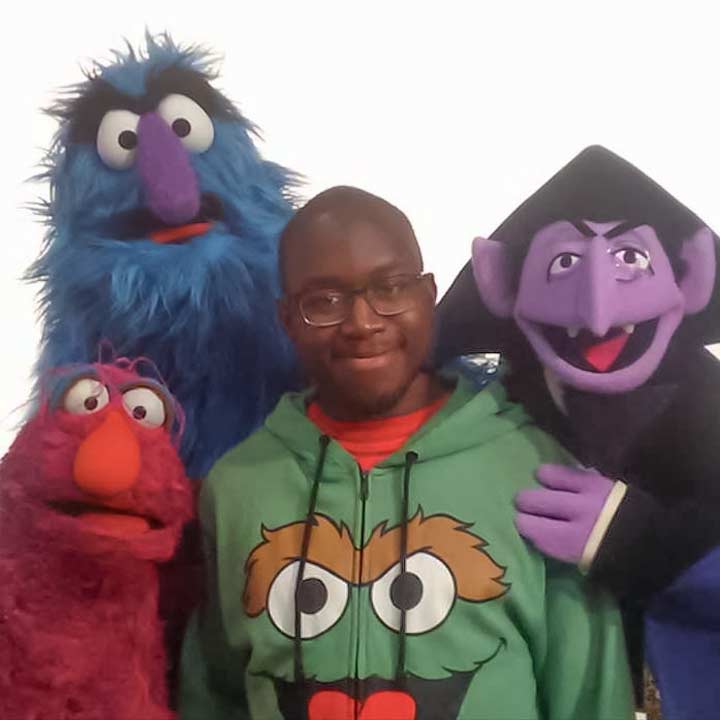 Prigg’s passion for puppetry dates back to a childhood spent watching "Sesame Street."

The switch not only solidified Prigg’s commitment to becoming a creative professional, but with acting a core component of the theatre major, it also gave him the opportunity to improve his puppetry performance skills. That soon led to a puppet show for his peers – and an unexpected recommendation from a friend in the audience. "He suggested I audition for Sesame Street," says Prigg. "As a self-taught puppeteer, you always wonder, ‘Am I good?’ They’re the gods, and I’m just a lowly man on the street. But he told me to put myself out there, because the worst that could happen was that they say no."

So last summer, that’s exactly what he did, pulling together an audition video of himself showing a variety of character voices and lip-synching with a puppet to "Uptown Funk." He then sent the video to legendary puppeteer, Sesame Street troupe member, and Big Bird performer Matt Vogel. "I was so nervous – part of me wanted him to respond, and another part of me was like, he’s too busy for me," he says. "But I had a small hope, so I kept the line open. If I didn’t see a New York area code, I ignored the call!"

His vigilance was rewarded a year later, when Vogel himself called to invite Prigg to Manhattan to attend a workshop on the Sesame Street style of puppetry. And this past October, with funding from the UAH Theatre Program to travel to and from New York, he arrived at the home of former UAH Theatre actors and Queens residents Caleb Grissett and Eric McCowan to begin his big adventure. "It was my very first time in New York and it looked exactly like you see on TV and in the movies," he says. "Times Square is that busy! The traffic is that packed! There are that many people!"

Because I am a self-taught puppeteer, I’ve always done solo acts. But there I could learn from the others and play off of them.

For four days, Prigg walked to the Sesame Street studio across from the Lincoln Center to hone his on-camera puppetry skills with help from Vogel; Martin "Marty" Robinson, who performs Telly Monster and Mr. Snuffleupagus among others; and Peter Linz, best known for performing the character of Walter in the 2011 Muppet movie and Theo the Lion on the PBS show "Between the Lions." After mornings spent in group lessons, the students split up into smaller sections to practice what they had learned, from how to properly enter and exit a frame to finding your center after free styling. The result was a collaborative environment in which Prigg found himself thriving. "Because I am a self-taught puppeteer, I’ve always done solo acts," he says. "But there I could learn from the others and play off of them."

For example, he learned how to create an authentic on-camera interaction between puppets, which is actually a lot harder than it sounds. "You’d think the puppets would just look at each other, but both eyes have to be seen on the camera to make it more real," he says. "It’s very subtle." He was also thrilled to be able to use Sesame Street’s proprietary Jim Henson Custom puppets throughout the workshop. "They said ahead of time not to bring your own puppet and I was glad I didn’t," he says. "Theirs were magnificent and gorgeous, with lots of nice monsters that had different fabrics and furs and colors!"

But perhaps more valuable than the specific techniques that he was taught were the insights Prigg gained from the workshop’s facilitators. "Marty told us that we were more than puppet performers, we’re puppet actors, so everything has to have a reason," he says. "And Peter said he loved it when we made mistakes, because that means they could be fixed." Prigg was also encouraged to see the workshop as a "safe space" free from judgment. "I felt like I fit right in," he says. "So I didn’t have to be guarded and competitive. We were all on the same team, and it was very uplifting." 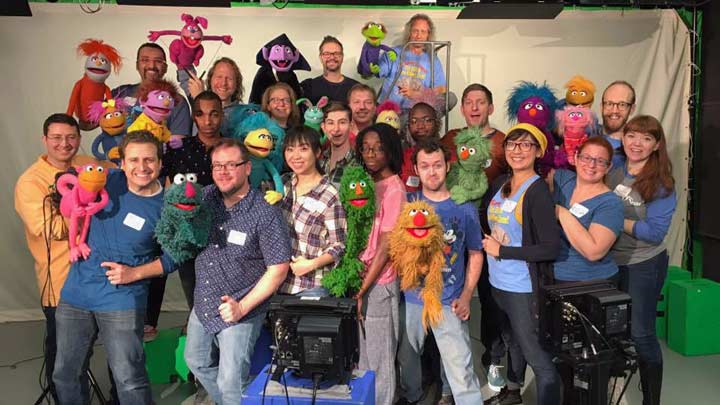 Prigg (center) welcomed the chance to collaborate with others while learning new techniques from the workshop’s facilitators.

Indeed, over the course of the week, Prigg went from knowing no one to forming strong relationships with his fellow workshop participants. "I brought my business cards with me in case I had the chance to do some networking, but I didn’t even need them," he says. "By the end, I already had everyone’s contact information and was friends with them on Facebook – which also gives me future connections to other ‘puppet legends’ whom I didn’t meet during my week in New York."

While in town, he also managed to take in many of the city’s most famous sights, as well as several Broadway shows. "I saw ‘Aladdin,’ ‘The Lion King,’ and ‘Avenue Q," he says. "And after ‘Avenue Q,’ I got to go back stage and see the puppets, which was amazing!" It all added up to the experience of a lifetime – and just the push needed for Prigg to reconsider his decision to put puppetry on the back burner. "I retired from it temporarily to focus on college, but that week really encouraged me to keep going," he says. "Now that I’m back, I’m seriously thinking about getting back into it."