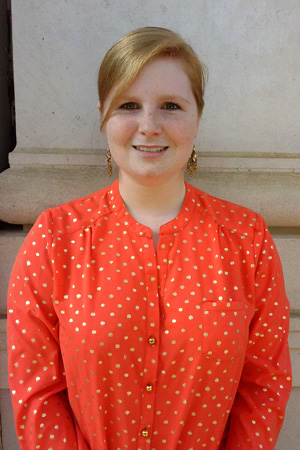 UAH student Ashley Cain is the president of the student-run Political Science Club.

HUNTSVILLE, Ala. (Nov. 20, 2013) - When Ashley Cain enrolled in The University of Alabama in Huntsville (UAH), she broke with family tradition; most of her family members had attended the same, large, out-of-state university. But the Scottsboro native says she "really liked the idea of going to a school with a smaller student body."

That decision has certainly paid off over the last few years. Cain, a political science major, has become an active presence on the campus, participating in several extracurricular activities. Her latest endeavor is a stint as the president of the Political Science Club, which was recently brought back into existence at UAH.

Cain says the club encourages students to be more involved in the political process and helps them make informed decisions when they do get involved. Yet despite what its name may imply, it is open to all students regardless of major.

"I think it's interesting to hear ideas totally different from mine - especially from the engineering students," she says, adding that the club holds biweekly debates every other Tuesday night in Morton Hall. "We like to think of our debates as free-for-all discussions."

They also provide a great opportunity to practice for much larger events, such as last spring's Model United Nations (U.N.) conference at Emory University in Atlanta. The Political Science Club sent a handful of students to represent UAH at the conference , where they earned kudos from their more-established competitors.

"It was the first time UAH has sent students to a Model U.N. conference in at least six years," says Cain. And while she herself was unable to attend, she adds that she hopes that participation in these types of events will continue past her presidency.

Another legacy she would like to leave behind as she prepares to graduate? An increased awareness about the issue of sexual assault. To that end, Cain is in the early stages of creating a group called Students Against Sexual Assault.

"Right now, I've got to work on getting active members," she says. "But I would love to get some self-defense classes started on campus, and get the university to include rape whistles in our orientation packets."

With any luck, she may be able to enlist some help from her younger siblings; Cain says she is trying to convince them to follow in her footsteps and attend UAH. If she's not going to carry on the family's tradition, after all, then why not start one of her own?