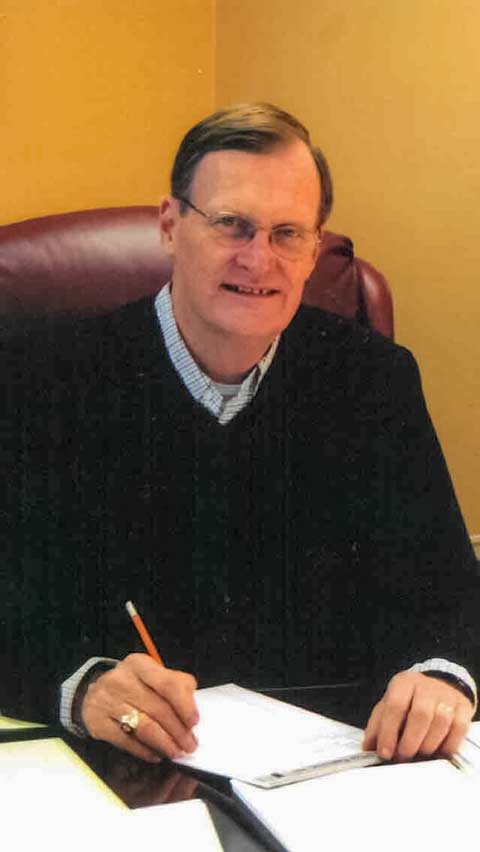 A private practice attorney in Huntsville at the time, Rieder was hesitant about accepting the job. "In the beginning, I was unsure whether I would like going from a private-practice setting to an in-house counsel position…But, I also thought that working as a lawyer in a university environment might be rewarding, so I said 'yes'. Obviously, I found it to be a good fit. I've never regretted the decision to work at UAH."

Rieder was born in Portland, OR, and "grew up in that beautiful state." He attended Willamette University in Salem, OR, and after graduation enrolled in Duke University Law School in N.C. After earning his law degree, Rieder entered the U.S. Navy, attending Officer Candidate School and the Naval Justice College at the Newport R. I., naval base. "During my three years in the Navy, I served tours of duty aboard the USS Topeka and the USS Yellowstone, as both a legal and operations officer. I was fortunate to see some of the world while on two overseas deployments."

Rieder, whose family on his maternal side included several attorneys, remembers working in a restaurant the summer before his senior year in college. "I was a political science major with no idea of what I wanted to do after graduation," he said. "That summer, while mopping floors at 5 a.m. before the restaurant opened, I was inspired to attend law school and enter the legal profession!"

"My mother's family had roots in Huntsville going back several generations, so I decided this would be a good place to begin my career," said Rieder. His grandfather, a prominent Huntsville attorney, represented one of the young men in the historic 1930s "Scottsboro Boys" case. "My uncle, M. Louis Salmon, was also an attorney and civic leader. I was influenced in my decision by my admiration for them and the positive difference they made in their community. I wanted to help people as they did."

Over the span of four decades, Rieder has been "privileged" to serve as legal counsel for each of UAH's Presidents. "Counting acting and interim presidents, there have been nine to occupy the office. I've enjoyed getting to know each of them personally and being a part of their administrative team," he said.

Rieder didn't meet UAH's first President Dr. Benjamin Graves, until his second year of employment, because Graves was on sabbatical assignment. "My employment goes back to the first general counsel for the UA System, Rufus Bealle. He and Associate General Counsel, Glenn Powell, were very helpful as I made the transition into my new in-house counsel role."

Rieder noted that much of what the Office of Counsel does is to help university officials in "problem solving" - finding a path for them to accomplish their objectives in a way that not only works but avoids legal and ethical pitfalls. It's satisfying when we're able to do this."

The most "challenging" time for Rieder and the Office of Counsel occurred during the long-running Title VI Higher Education Desegregation lawsuit (1983-2008), involving the U.S. Justice Department and every public university in the state. "UAH was faced with the possibility of an adverse judgment from the court that might have meant the loss of several important programs and even the closure of one or more of its colleges. The closure of the university itself was even mentioned as an option for the court."

The case was tried in Birmingham three times. "Because the stakes for UAH were so high, we worked seven days a week for months preparing for and participating in the trials. We worked with a number of witnesses, both UAH officials and experts, and literally reams of documents," Rieder said. "Though it took 25 years for the case to finally run its course, UAH was able to avoid any institutional damage and be part of what we felt was a just and equitable resolution."

Rieder said legal matters today involving institutions of higher learning have become "quite" complex. "The issues that society is struggling with are present on college campuses (for example, violence, sexual harassment/assault, cybersecurity, race relations, etc.), posing legal challenges. And we're experiencing an increasing burden of governmental regulation, intended to serve worthy goals but requiring more and more legal and administrative attention. As long as this is true, and I don't foresee a change, campus legal offices are going to be very busy."

The present Office of Counsel staff have been in place for over 10 years (some more than 20 years). "Bill Woodward, John Cates, Kerry Mitchell, and Patti Weldon are all conscientious and hard-working - our friendship and mutual respect have made it possible for us to be a cohesive team. Kerry's years of service exceed that of any other administrative employee who has worked in the office. John has been appointed the new Chief University Counsel, and I know he and the others will continue to serve the university well. I will miss being a part of this team."

Rieder said his advice to the Office of Counsel for the future is to "simply continue to do what we've all tried to do through the years. Value the people you work with on campus. Enjoy the 'journey' - you will complete it more quickly than you think. And be devoted to the highest standards of quality and professionalism in your work for the university client."

As he prepares to step-down as Chief University Counsel, Rieder finds "personal satisfaction" in helping the university transform the middle of the campus from an aging residential development (the Sanderson Subdivision), that was here before UAH was established, into the present UAH Greenway.

"Since I came to UAH, the Office of Counsel did the legal work for the purchase of 32 of the 35 homes in the subdivision and for the demolition or relocation off campus of all 35 homes. Today, the site of this former subdivision has become perhaps the most beautiful area of the campus.

"After retirement, I am looking forward to being able to spend more time with my wife and our daughters and their families, and to do volunteer work in the community," he said. "Since the expression of my faith has always been important to me, I also hope to be more involved in the future in ministry-related activities.

"I will miss the good people I've been able to associate with every day. UAH is served by very dedicated faculty, administrators, and staff - they've not only been wonderful 'clients' but also valued colleagues and friends."

***EDITOR'S NOTE: Mr. M. Louis Salmon, was a former Chair of the UAH Foundation and a long-time benefactor of the university. In 1996, the UAH Library was renamed the M. Louis Salmon Library in his honor.