Recent alumnus one of 10 to receive fraternity award 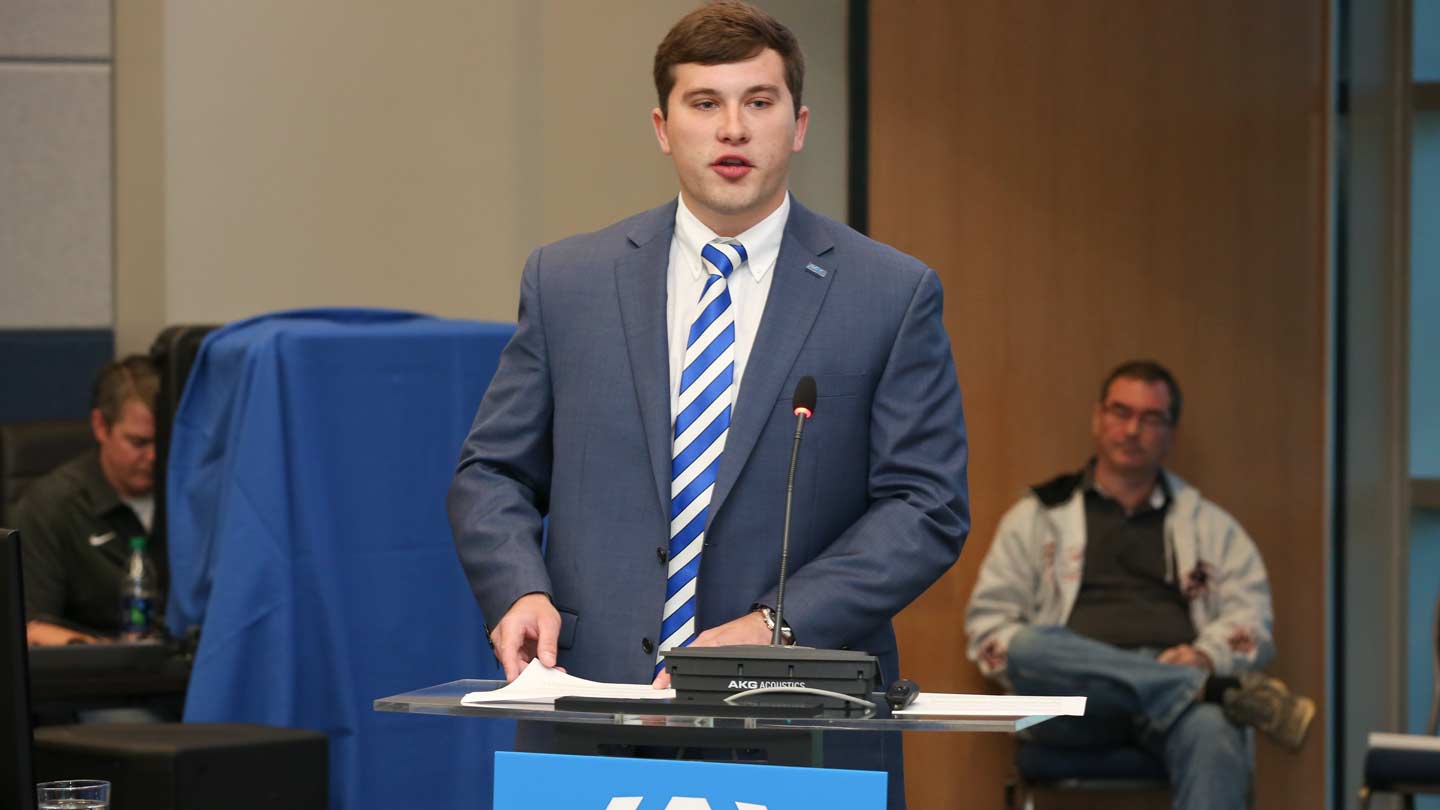 As the then-SGA president, Austin Finley addresses The University of Alabama System Board of Trustees in 2016.

A recent alumnus of The University of Alabama in Huntsville (UAH) who was very involved in campus life is one of 10 people nationally to receive Sigma Nu Fraternity’s Alpha Affiliate Award for the 2016-17 academic year.

Austin Finley of Gurley, Ala., was awarded for living an honorable life by upholding the ideals of Sigma Nu and influencing others to do the same. He was evaluated based on academic excellence, extracurricular record and demonstrated leadership for the fraternity, school, state and nation.

"My fraternity and the principles it stands for are very special to me, so I'm deeply honored and humbled to receive this award," Finley says. "I was encouraged to apply for the award by several university colleagues and fraternity members."

He was also heavily involved on campus. Finley held several positions in the Student Government Association, including president, speaker of the senate, and public relations committee chairman. He was also a member of the Board of Directors for the UAH Alumni Association and vice chairman of the Higher Education Partnership of Alabama – University Presidents Council.

"I thoroughly enjoyed my time in Student Government Association and the Interfraternity Council because of the positive roles they play on our campus," Finley says. "These organizations dedicate countless hours to serving our local community and to making UAH the exceptional institution it is."

UAH and Sigma Nu have been some of the greatest investments of his life, he says.

"This university provided me with a strong and affordable academic foundation that successfully prepared me to enter the workforce. Sigma Nu instilled in me its superb values and vision of excelling with honor," Finley says. "I'm deeply honored to represent both UAH and my Sigma Nu Chapter (Mu Beta) in January as I receive the award at Sigma Nu’s annual conference."

Headquartered in Lexington, Va., Sigma Nu Fraternity was founded in 1869 at Virginia Military Institute in Lexington. The fraternity currently has 163 chapters and colonies and has initiated more than 235,000 members since it was founded.