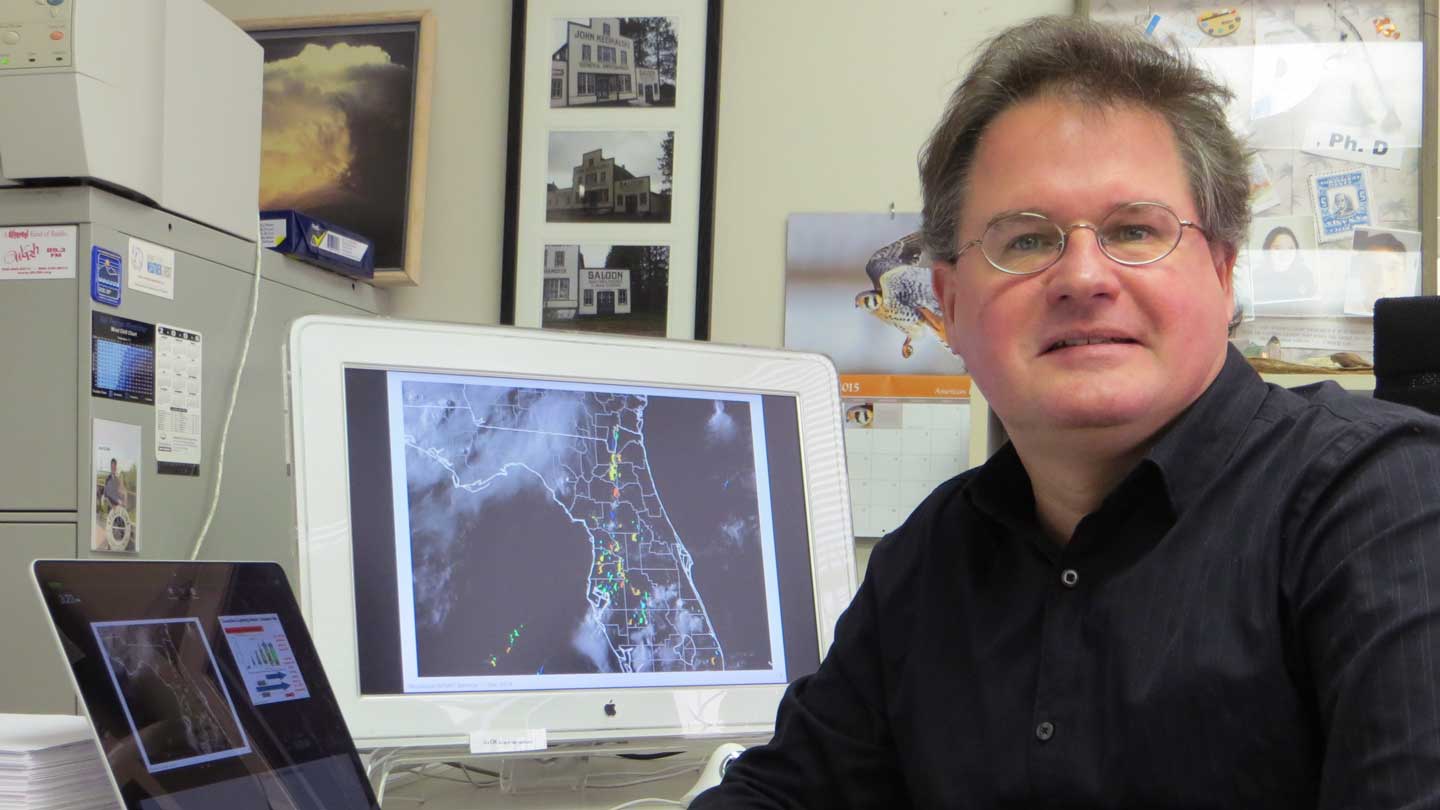 NextStorm Inc., Dr. John Mecikalski’s firm, has advanced to the second round of Alabama Launchpad competition.

A University of Alabama in Huntsville (UAH) professor’s startup weather nowcasting company has advanced to the second round of Alabama Launchpad competition.

Launchpad is a program of the Economic Development Partnership of Alabama Foundation and its seven Alabama research university partners to promote and reward high-growth, innovative start-ups from across the state.

NextStorm Inc., Dr. John Mecikalski’s firm, evolved from satellite data weather nowcasting research he’s been doing since 2002. Nowcasting is the accurate prediction of when and where storms will arise over a time period an hour or two into the future. His earlier work was adapted for use in convective storm forecasting by the Federal Aviation Administration (FAA) and National Weather Service. At UAH, Dr. Mecikalski is an associate professor of atmospheric science.

The products he’s developed use satellite data processing algorithms that can detect when and where storms will appear, Dr. Mecikalski says, as well as discerning which cloud will soon produce heavy rains, which will contain lightning, and which are at highest potential to become severe storms.

I think I'm well-positioned to offer satellite-based weather solutions to the private sector. I'm starting to feel that there are some good things that are probably going to start happening here soon.

“The big key here is that most everyone else in the weather business relies only on radar and numerical weather prediction model data to solve these types of problems,” Dr. Mecikalski says. Radar data detect rainfall only once the storm clouds have already become established, providing little forecast lead time until the onset of rainfall. Forecast models often get the timing and placement of showers and thunderstorms incorrect compared to reality.

Dr. Mecikalski’s nowcasting system is a step ahead of that.

“For example, if the FAA employs this system, now they can start to translate a pseudo-radar echo ahead of time – before the radar echo even forms – to predict future storms,” he says. The benefit is knowing what air space will become obstructed by convective storms farther in advance of actual storm development, and also knowing the air space that will remain free of heavy precipitation. In the end, airport and air traffic operations can be run more efficiently.

And aviation isn’t the only potential use. NASA could employ the product to better predict weather immediately before launches. Major league sports, NASCAR events, or any instance where a large gathering of people is planned could make use of NextStorm’s product suite to know about possible approaching weather before it arrives.

“There’s a growing business in event planning because my methods give you an advantage over radar,” Dr. Mecikalski says. “It can show you where the storms are going to be appearing.”

In an automobile, the navigation system on many new cars today could more precisely show drivers where heavy rains will be falling in the next couple hours or anywhere along their travel route in advance of their arrival. Having such information will afford an ability to alter travel routes or plans to avoid the small, pop-up storms that commonly occur on summer afternoons

“NextStorm technology can help predict a hazard for them ahead of time,” Dr. Mecikalski says.

TV weather forecasting is another big market for the product.

“If they can get this product in a colorful, user-friendly or forecast-specific format, it will provide them new and useful forecasting information.”

Dr. Mecikalski incorporated NextStorm Inc. in mid-summer and has been working on partnering his technology with other weather prediction firms.

“One business avenue I’d like to follow is to partner with other companies that are already in the field and adapt my technology to fit and enhance their systems,” Dr. Mecikalski says. “I think I’m well-positioned to offer satellite-based weather solutions to the private sector. I’m starting to feel that there are some good things that are probably going to start happening here soon.”

“Initially our collaboration was toward protecting the many ideas and technology that John had developed here and then we looked at how these ideas would find its way into the marketplace,” says Grant. “The partnership with OTC meant that he had someone mentoring and coaching him every step of his journey to commercialize his technology.”

“They were very focused on helping NextStorm organize its ideas and technology and be able to apply for, and show promise in, the Alabama Launchpad competition,” Dr. Mecikalski says. “With their help, any new startup will go far.”

OTC is NextStorm’s partner in its Alabama Launchpad bid.

“Launchpad is a strategic investment of resources for any startup company in Alabama. They have a process that requires companies such as NextStorm to go through a series of steps that makes them think very deeply and seriously about what it takes to start a company and make it successful,” Grant says. “The monetary reward is merely icing on the cake.”

UAH remains committed to fostering and nurturing the high-tech companies created by its faculty, staff and students, Grant says.

“UAH leaders understand the need for such a function with the university. They understand that starting high-tech companies is an important part of UAH playing an integral role in the innovation economy,” Grant says. “We need to be, and are, supportive of our startups. These are the companies that have the potential to grow and employ many people within the state. And these are the types of companies that will remain in this state.”