The Argentina-born Dr. Cerro, a University of Alabama in Huntsville chemical engineering professor who does basic research into making stable and long-lasting bonds between dissimilar materials, is fascinated by why some coatings and surfaces find each other attractive while others face rejection. But unlike in love, this matchmaker can quantify why.

To Dr. Cerro, everything seems of interest for his field of study, from nature to meta-materials that never happen there, and from the large scale to the nano-world. A recent conversation ranged across topics from a polishing technique and spray his wife had discovered that makes pans non-stick for noodles to placing quantum dots on a surface.

He takes many cues from nature, describing the hydophobic effect in which water is repelled and beads up on the leaves of a lotus and the hydroscopic rose petal effect, where water is attracted and held. His basic research has applications ranging from explaining how nature works to creating meta-materials not found there, with implications for everything from industrial coating processes to printing, electronics and new single-molecule coatings used to create nano-gels for improved microscopy and imaging. 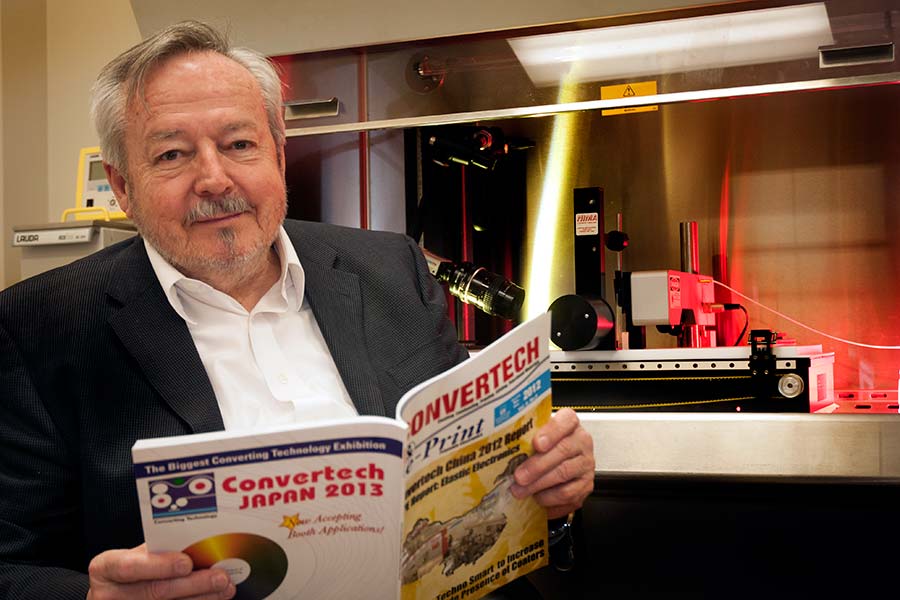 Dr. Ramon Cerro in his lab with the magazine that featured a review of contact angles and adhesion he co-wrote.

“The surface has to get wet to get adhesion, and the way you wet it matters,” said Dr. Cerro in summing up his invited review on contact angles and adhesion, done in collaboration with Dr. M. Elena Diaz of the Universidad de Salamanca in Spain and Dr. Michael D. Savage of Leeds University in England. “Wetting precedes adhesion, and the goal is not to entrain air in the coating process.” In “Contact angles and capillary phenomena” (Convertech, Vol. 2, No. 6, Nov.-Dec. 2012, pg. 62-69), the trio explains how drop contact angles interact with hydrophobic and hydroscopic substrates and capillary action. The paper discusses molecular affinity between liquid and solid phases in coating processes and the microscopic geometry of the solid substrate.

“The contact angle is what really counts,” said Dr. Cerro, who for 12 years was chair of UAHuntsville’s chemical engineering department. “What the contact angle is telling you is that there is an attraction between the coating and the solid material.”

Broadly defined, contact angle is the measurement of the angle at which the sides of a drop meet a surface on which it is resting. It has a direct effect on the wetting effect, and that affects the adhesion of the coating. For example, a windshield coated with a rain repellant film maximizes the contact angle, which minimizes the adhesion of raindrops, and so they run off as drops. On the other hand, on an untreated windshield the rain adheres better because the contact angle is minimized, allowing the capillary action of the glass to have greater effect, and the water runs off in sheets.

In industry, proper coating adhesion is critical. “We don’t have photographic film very much anymore, that industry has gone through tremendous change,” said Dr. Cerro, “but back when we did, they learned really well how to pay attention to the contact angle when making film so that there would be no bubbles trapped between the layers of photographic chemicals they applied to the film. This film was being made at tremendous speed, and they would make it in a carbon dioxide environment because any carbon dioxide bubbles formed would be absorbed by the chemicals applied.”

Dr. Cerro, who as a member of the National Academy of Engineering of Argentina is the only member of a national engineering academy currently at UAHuntsville, said he has been “working in the area of interfacial contact for 40 years.” In that time, he has seen it advance to where a single-molecule thick coating can be uniformly applied. “I was talking to a graduate student the other day and he said, ‘How do I know I have applied this correctly?’ and I said, ‘You don’t, because you can’t see it until it gets under the microscope.’ ”

Like so much of what he studies, single-molecule coatings take their cue from nature. “Look at an abalone shell,” said Dr. Cerro. “What you are seeing, nature made one layer at a time, and that layer was only one molecule thick. This is how nature builds things, one molecule layer at a time.”

Asking questions about the natural world has led to breakthroughs. “One of the puzzles that is still not resolved is why can a tree grow to be taller than 10 meters, or 30 feet?” Dr. Cerro asks. “The limit of capillary action, as far as the effect of gravity and the atmosphere, is 10 meters, or 30 feet. If you have a larger column of water under its weight, there will be places where pressure would be, apparently, negative. Yet they grow taller than that.”

One possible explanation is that trees use a natural capillary rise effect that happens in the presence of a wedge or corner angle to boost fluid and nutrients beyond 30 feet. “When you have a wedge, the water will go up indefinitely,” Dr. Cerro says. The wedge angle itself draws the fluid up. That observation led to the role he had in development of glass capillaries to measure very small liquid contact angles inside capillaries of square cross section.

On the nano-scale, Dr. Cerro is working on a nano-dot process with Dr. Junpeng Guo, professor of electrical engineering and optics, and Dr. Jeffrey Weimer, associate chemistry professor.

“What we are trying to do is to deposit very regular layers of quantum dots onto a surface,” he said. “Quantum dots are so small that to make a visible layer, you would need thousands of them.” The challenge is attractive to the coatings matchmaker.