Nurse rises to top of academic career ladder at UAH 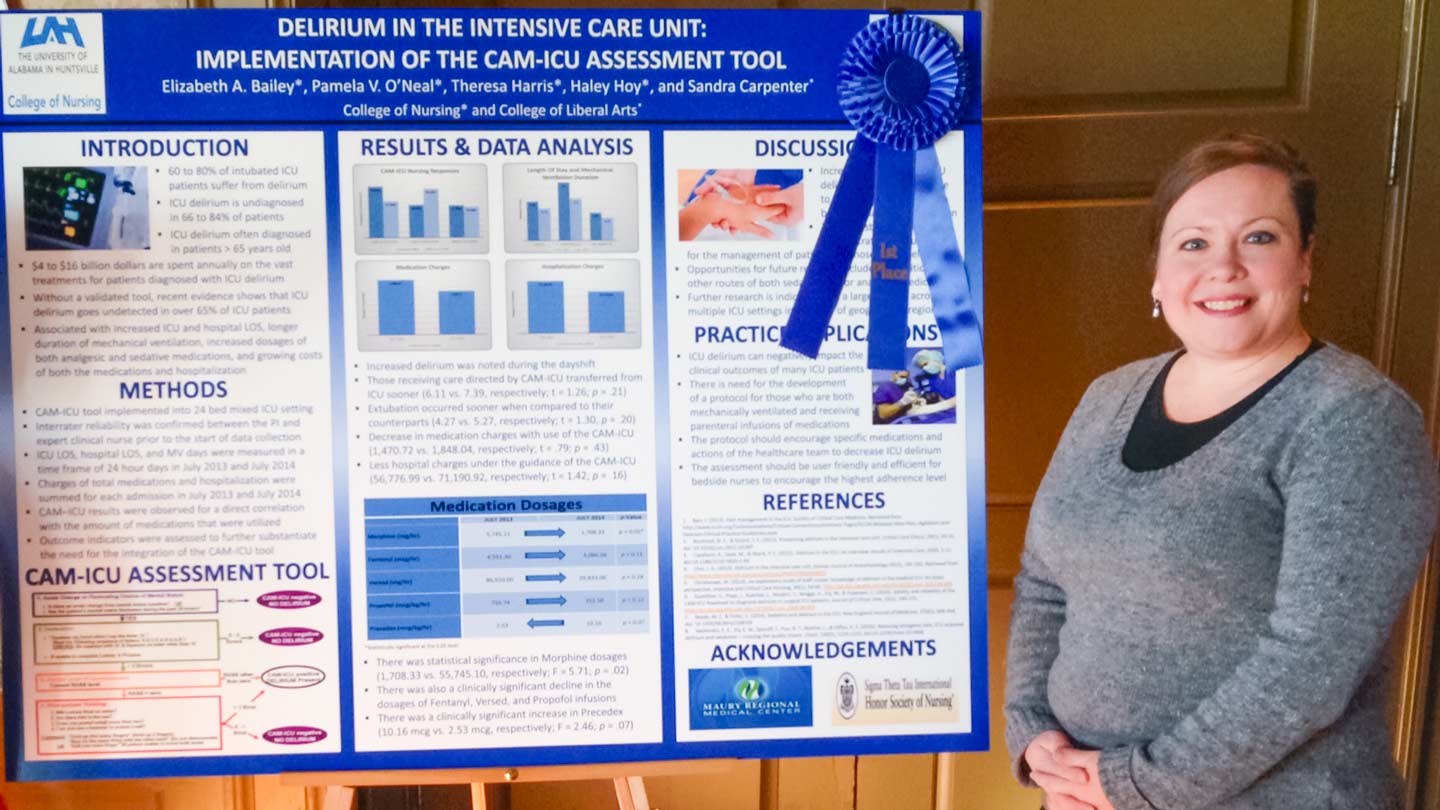 Elizabeth Bailey, who earned her DNP last December and is now pursuing an FNP Certificate, received the first-place award for her research poster at the UAH Graduate Awards Ceremony.

Elizabeth Bailey's original career plan was to become a nurse. Now, however, she's become that and more. This past December, she received her Doctor of Nursing Practice degree from the College of Nursing at The University of Alabama in Huntsville (UAH).

"Never in a million years did I think that I would ever be accepted into a doctoral program," says Bailey, who also received the program's Student Honors Scholar Award thanks in part to a 4.0 GPA. "I give all of the credit to my professors for providing me with a strong education that I have been able to build off of since day one."

Bailey was initially inspired to become a nurse after seeing her grandmother through a tough battle with terminal cancer. "The hospice nurses who provided her care were some of the most compassionate individuals I have ever dealt with," she says, "and I found myself drawn to that area of healthcare."

She ended up earning an associate degree from Columbia State Community College and a bachelor's degree from Austin Peay State University before landing a full-time critical care nursing position at Maury Regional Medical Center in her hometown of Columbia, Tenn. But before long, she began considering returning to school for a graduate degree.

"I asked my coworkers who were in the middle of their master's degree or who had already completed it, and it turned out most had attended UAH," she says. "There were no negative comments ever made, but rather descriptions of how helpful the faculty and staff were and how it really was possible to continue working full time while attending graduate school full time."

I hope that one day I might be as instrumental in a student’s growth as my professors were for me.

This was soon confirmed by her own experience in the Acute Care Nurse Practitioner master's program - "the professors were very approachable and in tune with each individual student," she says - and after earning her degree in acute care, Bailey decided to stay for her doctoral degree. "I never saw myself as someone who would be interested in performing research, but it is strangely addictive once you begin!"

Her doctoral research focused on implementing a bundle of three assessment tools to assess pain, agitation, and delirium in mechanically ventilated patients. First she evaluated the patients' medication dosages, ICU and hospital length of stay, total duration of mechanical ventilation, and the medication and hospital charges. Then she compared these outcome indicators both before and after the implementation of the assessment tool bundle.

"As you can imagine, assessing patients who are unable to communicate is difficult, but the end results were quite positive," she says. "By implementing this bundle of tools there is an increased likelihood that pain, agitation, and delirium will be accurately recognized and adequately treated. And now a 24-month continuation is underway so that a larger group of study participants can be evaluated."

Of course, conducting research is only half of the equation; the other half is sharing your findings with the community at large. "There is no question that the use of evidence-based practice in healthcare is the gold standard treatment of all patients," she says. "This evidence stems from individuals performing research in all areas; however, it is equally important that these results are presented."

Thus far Bailey has presented hers at the Sigma Theta Tau Regional Conference in Murfreesboro, Tenn.; the Southern Nursing Research Society's Regional Conference in Tampa, Fla.; and the Joint DNP Intensive in Birmingham, Ala. She also received the first-place award for her poster "Delirium in the Intensive Care Unit: Implementation of the CAM-ICU Assessment Tool" at the UAH Graduate Awards Ceremony in Huntsville, Ala.

Now she must wait for others to do the same. "As a healthcare provider it is imperative to integrate the most up-to-date recommendations in the care of your patient population, but you would never change your practice based on the results of one study alone," she says. "So there is a need for multiple studies to come to similar conclusions, which is what generally leads to a sound foundation of recommendations."

Should any new findings result from the 24-month continuation, however, Bailey will likely have to leave their presentation to someone else. She will officially graduate from UAH this December with the completion of her post-master's Family Nurse Practitioner Certificate. "That will provide me with a more well-rounded approach so that I can ensure each patient receives the treatment that he or she needs and deserves," she says.

It will also bring her closer to her "be-all, end-all" goal of one day owning her own rural family practice clinic. Though now that she's a newly minted DNP, there's another career path she's thinking about pursuing - teaching. "I know that some of my most memorable mentors were from my nursing programs," says Bailey. "I hope that one day I might be as instrumental in a student's growth as my professors were for me."