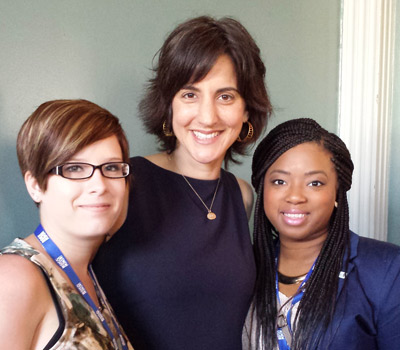 HUNTSVILLE, Ala. (Oct. 14, 2013) - Among the 700+ women who attended this year's National Conference for College Women Student Leaders (NCCWSL) in Washington, D.C., two were from The University of Alabama in Huntsville (UAH): Kenya Wallace, a Ph.D. student in materials science, and Karelohn Williams, a junior in psychology.

Each learned of the conference separately. Williams says a guest lecturer in her women's studies class talked about her experience attending it. Wallace, meanwhile, was at a meeting of the Huntsville chapter of the American Association of University Women (AAUW) when it was discussed.

"I had already taken on a few leadership roles with AAUW and the Minority Graduate Student Association, but I felt like I needed guidance to become an effective leader," says Wallace. "So I read up on the conference and saw what it was about."

But wanting to go and getting there are two different things. So both applied for - and were granted national NCCWSL scholarships to cover conference fees and housing, with UAH's Women's Studies Program and the Huntsville chapter of the AAUW co-sponsoring transportation costs and a travel stipend.

"It was my first time on an airplane!" says Williams, adding that the pair stayed in campus housing at the University of Maryland in College Park, Md. But even though they were just a short taxi ride from the nation's capital, there was little time for sightseeing.

"We started at 8 a.m. every morning and went to sleep at 11 or 12 at night. It was very exciting the whole time," says Williams. It was also overwhelming, at least at first. But then, she says, "you got in the groove!"

The women there make you want to do more.

Over the course of the two-day conference, Wallace and Williams attended skill-building workshops and group networking events. Each was designed to educate and empower women to become leaders and advocates in their own communities, whether through politics or business or the arts.

One such workshop, True Colors, required participants to complete a leadership skill inventory that assigned colors to personality types. In Wallace's case, she was a mixture of green and orange. "Greens take charge and we feel we do it the best," she says. "We don't need help all the time." Williams, by contrast was blue. "Blue is more sweet, sensitive, and easy going," she says.

The point, explains Wallace, was to not only know yourself, but also to understand how your personality translates into your leadership style. "If I can know my personality to a T, what's positive or what may be a hindrance," she says, "I can lead more effectively." 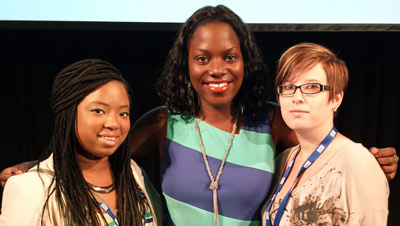 But while both Wallace and Williams enjoyed and benefited from workshops like True Colors, what they really took away from the conference was inspiration - and not just from the keynote speakers, but from the other attendees as well.

"I don't really get out there and go up to people and say let's be friends forever," says Williams. "But it was an experience to go and not be afraid, because everyone else was out there doing it." In fact, she says, "It was one of the greatest experiences I've ever had in my life."

It also made the UAH students think about how they could bring what they learned back home to their own community. "The women there make you want to do more," says Wallace, referring to 2013 NCCWSL in Action award winner Odunola Ojewumi as a perfect example.

"She founded a nonprofit funded by a grant and gave scholarships to low-income women in her community," says Wallace. "So we got the idea to do a 'NCCWSL lite,' a kind of mini-conference here for women from the different area colleges." She adds that plans are currently in the works to host it at UAH next spring.

In the meantime, however, the pair has already shared their NCCWSL experiences at a meeting of the Huntsville chapter of the AAUW last month. And there's always the chance one or both may attend the 2014 NCCWSL.

"I would love to go again," says Wallace. "Anytime I can get support to go, I'm all for it!"