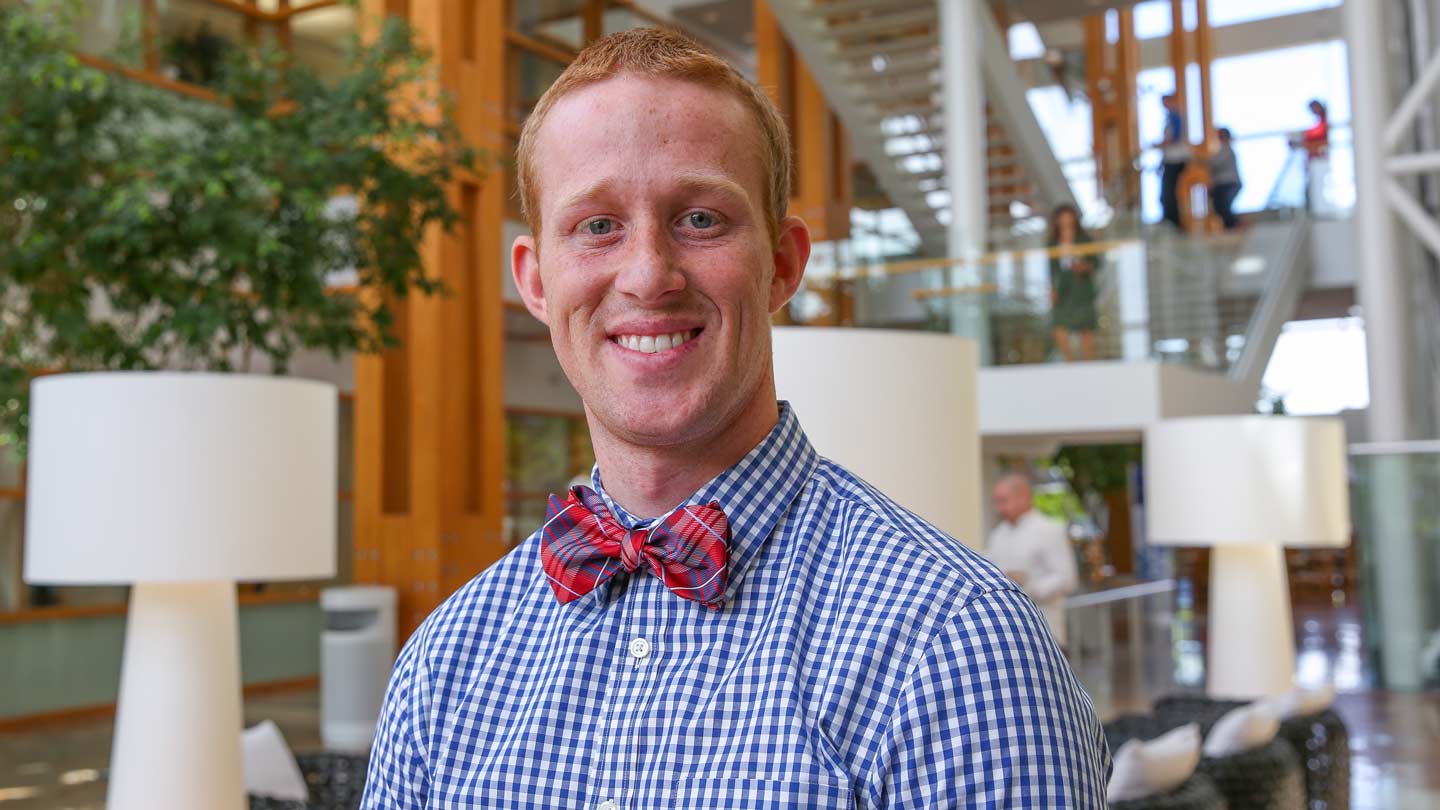 This year, the College of Business Administration at The University of Alabama in Huntsville (UAH) placed its first intern – MBA candidate Bruce McMullen – at the HudsonAlpha Institute for Biotechnology as part of the HudsonAlpha–UAH Entrepreneurship Collaboration. Signed last fall, the partnership seeks to enhance the educational experience of the College’s students and strengthen the business skills of HudsonAlpha’s life science entrepreneurs through speaker exchanges, internships, and workforce development initiatives.

"Bruce was selected for this unique opportunity because of his strong professional recommendations and his recognized leadership skills in his home country of South Africa," says Dr. Caron St. John, Dean of the College. "Further, because he is working on special projects with HudsonAlpha’s Office of Economic Development, it aligns well with his interests in management and investment strategies."

The internship requires McMullen to work 20 hours a week during the academic semester and 10 hours a week during the summer semester. "There have been moments of difficulty wearing three or four hats," he says of the balancing act, "but it’s really helped me with time management and professionalism. And fortunately, HudsonAlpha has been really generous with honoring my school schedule!"

It’s brought what I’m learning in the classroom to life.

As for his duties, they vary but include assisting HudsonAlpha Vice President for Economic Development Carter Wells in the recruitment of new life science businesses to the Institute, serving the more than two-dozen HudsonAlpha associate companies, and helping foster an environment of entrepreneurship in the HudsonAlpha collaborative community. He’s also recently been asked to help out with the biweekly HOTCoffee meetings for entrepreneurs, which are being held in the HudsonAlpha Auditorium through the end of August.

So far it’s been a perfect fit for the native of Cape Town, South Africa, who has long been interested in the life sciences. "Pre-med was my initial track," says McMullen, who attended Harding University in Searcy, Ark., on a golf scholarship as an undergraduate. It was only after adding a business minor halfway through his undergraduate career, however, that he decided to switch career paths from medicine to business. "I started being honest about my skill sets and my gifts," he says of the decision.

With an MBA program the next logical step, he applied – and was accepted – to several U.S. schools in the hopes extending his stay. He ultimately chose UAH because of the affordability of its MBA program and the "unique atmosphere" of its campus – not to mention its location in Huntsville. "I felt, the day I made my decision, comfortable and excited about the next step of my journey," says McMullen, who at the time was wrapping up a yearlong internship in Washington, D.C. "My initial thought was that I’m going back to the warm, hospitable south!"

Fortuitously, his arrival in the fall of 2014 coincided with the establishment of the Entrepreneurship Collaboration, and a few months later McMullen was tapped by Dr. St. John to intern with HudsonAlpha as part of the partnership. It was an offer, he says, that validated his decision to come to UAH. "If I were at any other school, I may have been just a number. But opportunities like this make me grateful to be here."

Now, with a few months as intern under his belt, McMullen has already garnered not only experience in the professional workplace but also a better understanding of how the program’s curriculum applies to real-world scenarios. "It’s brought what I’m learning in the classroom to life," he says. "It has been interesting seeing the dynamics of how a process should theoretically work in terms of organizational leadership and how it actually plays out."

He hopes in turn that he’s making a positive contribution to HudsonAlpha. "I think my presence helps create a youthful, stimulating environment," he says, adding that he’s also trying to speak up more despite being one of the younger members of the team. "One piece of advice I got this semester was you owe your boss your opinion. So you have to trust that you can and do add value, even though that takes being proactive and a willingness to take risks and engage."

McMullen will soon be taking this newfound confidence, and the skills he’s acquired both in the class and at HudsonAlpha, on to a new organization; he graduates this December with plans to join a local investment firm. Nevertheless, he feels confident that those who come after him will benefit just as he has. "We’re merely in the seed stages of what this collaboration might become," he says. "I think the longer this program continues and the more UAH students who get involved here at HudsonAlpha, the more fruitful it will be for everyone."

As an intern with HudsonAlpha, McMullen says he enjoys "taking it from the textbook to real-life experiences of how to solve problems."