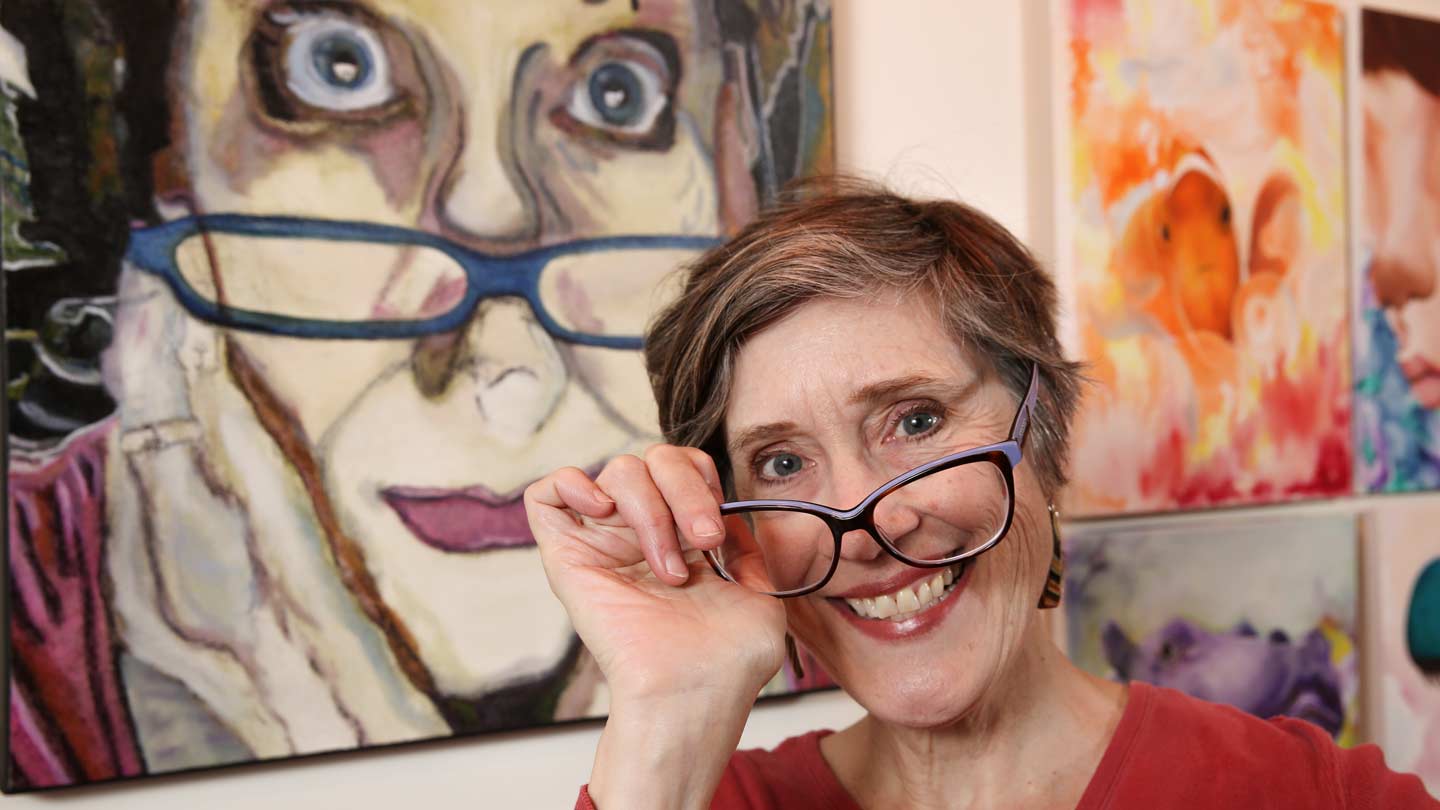 As Marylyn Coffey ('07, MA, English) ties up some loose ends before retiring from The University of Alabama in Huntsville (UAH), there is one thing she is sure of: She will not be forgotten.

For more than three decades, Coffey has combined a rather unique career in the arts and communications. She began her employment at UAH in December 1998, as part-time gallery administrator, hired by Michael Crouse, Art Chair and Professor. In addition to her years at UAH, Coffey has worked as a publicist for the Huntsville Museum of Art, and a graphic design and visual communication arts instructor at Calhoun Community College.

She officially retires this week, as Senior Staff Assistant for the Department of Art, Art History and Design, after nearly 20 years of service to UAH. By her own account, Coffey performs a variety of duties "that would take pages to describe. I make sure the department (with its idiosyncratic, artistic, and bureaucratic needs and goals) runs smoothly as best I can.

"First, this has been the longest-lasting full-time job I've ever had. It must be a good fit. I've had an opportunity to use every skill I have ever learned, and then some. I've also learned new ones, like being conventionally nice (and not too loud) on the telephone," she noted.

I will be remembered, I know that," Coffey said. "And I’ll be around a lot, so there won’t be a chance to forget

"Marylyn works magic behind the scenes. She could be ordering a crane to lift a piece of equipment to an upper floor, tracking down a model for a figure drawing class, and creating the labels for an exhibition all in one day. Marylyn took it all on with determination and a quirky sense of humor that made it all seem effortless," said Dr. Lillian B. Joyce, Chair, Department of Art, Art History and Design. "Marylyn's creativity, passion, problem-solving, and attention to detail have made her the ideal match for our department. We will miss her terribly, and wish her the best as she launches to the next stage," said Joyce.

Coffey said the highlights of being the art department's super efficient girl Friday include "meeting and helping students, meeting and relating with accomplished artists who come here for shows and talks, and working with interesting faculty who put up with my eccentricities. I would suggest my faculty try to find someone slightly less eccentric," she said.

With such a large department to assist, Coffey said the best advice she can offer her successor is not to panic, and remember the responsibilities of others.

"Remember that other people are under pressure, too. Remember that other people have their own protocols and priorities and may not understand yours instinctively. I like to 'get things done,' but there are people (accountants, for instance) who need to examine the details of getting things done both before and after the fact. It's their job, not their world view necessarily."

The next phase of Coffey's life include several new adventures such as film making, house remodeling, and spending a lot of quality time with her 14 year-old nephew.

"Right now I'm addicted to making little films (after two video production classes at UAH) so I will continue with that, I hope," she said. "I am pretty active in local 'alternative' performing arts, not least of which is the E.I.E.I.O Orchestra, which is a sound-making group that gets together at Lowe Mill on occasion. And, I belong to a writers' group.

"The benefit of free classes for full-time employees is fantastic, and that's how I got my Master's degree in English in 2007. I will continue taking courses here at UAH in whatever interests me (it's still free after retirement!). Then there's my house-it needs some reorganizing and redoing. I'll be able to spend more time with my husband, professional magician Russell Davis. And here's a crazy thing — I don't have children, but I may be hosting my nephew for an entire school year in 2017! His mother lives in Spain and wants him to have the experience of living in the U.S. at some point in his life. He'll be 14. There is SO MUCH to do!"

In her years of service to the university, Coffey has witnessed some very funny incidents involving faculty, staff and students.

She remembers two events vividly. The first, "a member of the community calling to say he had an actual photograph of famed 16th century poet, William Shakespeare, and wanted someone to tell him how much it was worth. I'm sure this was funnier to those who were looking at me as I talked to the man on the phone," Coffey said. She also remembers dressing up as one of the art professors, Vinny Argentina, for Halloween. "He was new at the time, and his 'look' was so imitable: Hawaiian shirt, sandals, shorts, big beard. I scared a student, as I recall. She didn't know what I was. I was Vinny's uncle, of course!"

For Coffey old habits die hard. As is her custom she is still promoting the programs — old and new of the art department, as she officially leaves the university.

"We have the Digital Animation and Game Design (with Computer Science) programs now, so that's going to be great for students interested in those areas. There's going to be a show in the Union Grove Gallery from May 21 through July 2, "Intimate Spaces"- small works by Alabama artists-so don't forget about the existence of the little white church building in your travels around campus!"

Coffey said in the fall, there will be a workshop for K-12 art teachers that will give them much needed continuing education credits. "And remember, our 'Foundation' courses are open to everyone, especially art history surveys and drawing."

In Coffey's own words, she will "be around a lot." So, to all her UAH co-workers, friends and especially to her frenemies, it's not goodbye, it's à la prochaine or until the next time we meet.