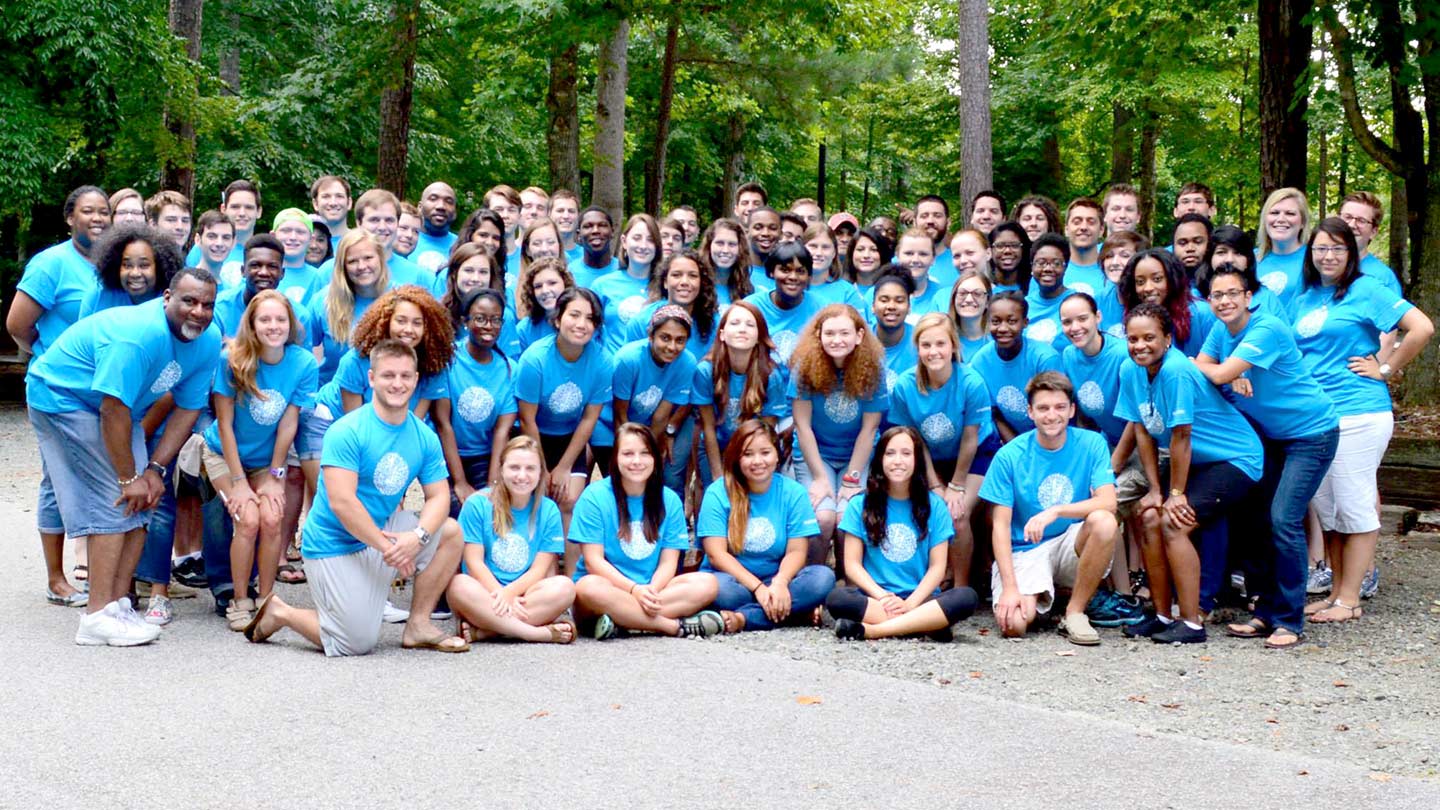 The national LeaderShape Institute, held in Atlanta this summer, encouraged participants to lead with integrity.

For the past three years, students from The University of Alabama in Huntsville (UAH) have attended the LeaderShape Institute, a six-day educational experience that equips young adults to become leaders within their communities. And this year was no different, with UAH sending its largest contingent of students yet – including Julia Schneider, Christine Woodard, Ryan Gott, Garrett Wilson, Mariah Tolbert, Brittany Eaton, and Tanvi Singh – to the national LeaderShape Institute held in Atlanta, GA, in late July.

"This year we sent members from our Student Government Association, Housing, the Leadership Programs, Blue Crew, Lancers, and T.R.U.E. Chargers," says Kacey Schaum, UAH's Assistant Director for Student Life. "The students chosen already showed leadership on our campus, so we have seen their potential. And my hope is that they have returned well-equipped and confident as leaders, and inspired to make a change on our campus and in their communities."

Not only did all of the UAH students have a strong background in leadership, several had attended leadership conferences in the past. But nothing, says junior political science major Brittany Eaton, prepared them for what to expect at the LeaderShape Institute. "It was a life changing experience," she says. "I have gone to a lot of different leadership institutes and I expected it to be like those, but a lot of what we talked about was giving ourselves permission to be ourselves."

Junior supply chain management major Julia Schneider agrees. "I thought it was going to be about leadership in an organization, but you learned more about yourself and developing personal relationships," she says. "We talked about our values and how that plays a role in our leadership style. And we talked about the lens through which we see the world and changing your own personal lens."

They reinforced that you have to stand up for what you are and what you believe in. You can't just sacrifice your values because that's what everyone else is doing.

It wasn't always easy, particularly for the introverts in the group. Tanvi Singh, a senior biology major, says it was a challenge at first to let others in. "It takes me a while to trust people and I like to judge a situation before I get into it," she says. "But I learned it was ok for me to give myself a push and be vulnerable and open to the things I was learning." And as a result, she adds, "it was a lot better than I thought it would be."

The same was true for senior acquisition management major Christine Woodard. "I'm not a talkative person at all and it takes a lot for me to walk up to someone and talk to them," she says. "But being encouraged to talk to other people at LeaderShape made it easier for me to do it. They made us feel really comfortable and it was a safe environment where we could confront things we were having problems with or weren't comfortable with."

Much of the curriculum centered on helping the students' define their personal vision, with the objective of putting that vision into action once they returned to their everyday lives. This required them to figure out both what they wanted to do in the short term and what they wanted to achieve in terms of life and career goals – something that most college students would be hard-pressed to do.

"I didn't even know that we were going to be talking about visions!" says Schneider. "So when they told us to think of a vision to change the world, I thought, well, supply chain is an awesome career path, but what am I passionate about and what do I feel like I can develop." That led her to think about her minor, Spanish. "I really love Spanish, so I thought about how I could impact the world using that."

Woodard had the same concerns. "I didn't really understand at first about making a vision, so mine was grand and I thought there was no way it would be possible," she says. "But as we broke it down more, I saw how I could develop it on a smaller scale. And I realized it was about a lot more than just leadership. It was about how to affect people in a good way and accomplish what you set out to do and make a plan for even the biggest thing." 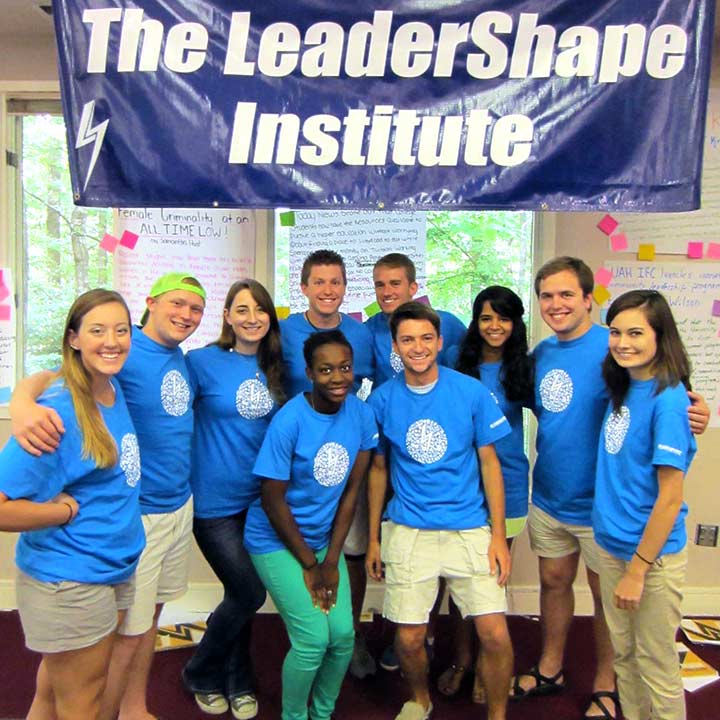 For the UAH students who attended the LeaderShape Institute, it was a "life-changing experience."

As the students worked through the logistics of their vision, they were also encouraged to consider what kind of leader they wanted to be, and how to best leverage their own skills and the skills of those around them to achieve their goals. In Schneider's case, that meant practicing inclusive leadership and incorporating other's input.

"I am always someone who takes charge, but at LeaderShape I learned to focus a lot on other people's ideas, like how can this person contribute rather than me delegating," she says. "Not everyone wants to be the leader, but everyone wants to feel important. So that's something I can take with me forever – inclusive leadership and opening up to others."

For Eaton, it meant overcoming her shyness and realizing the inherent value of her contributions. "I tend to be quiet in group settings, but LeaderShape helped me figure out what our roles are and how to communicate them better," she says. "I know I'm a motivator and an encourager, and that my role is to keep everyone on task and the morale up because that's what I'm good at."

And knowing who you are is key, because that's where leading with integrity – a key LeaderShape concept – comes in. "They reinforced that you have to stand up for what you are and what you believe in," says Woodard. "You can't just sacrifice your values because that's what everyone else is doing."

In the end, all of the students walked away with a better knowledge of themselves, their leadership style, and what they planned to do after returning to campus for the fall semester. And now that they are here, they say they are ready to not only put what they learned into action but also share it with others.

"If I can express it to 200 current and future leaders so they can take it back to their student organizations, it's like a domino effect," says Schneider. "We know that not every single person is going to get something out of it, but if even five can see what we see, it is going to open their eyes."

Even better, she continues, would be for them to attend LeaderShape themselves. "I've already told people if you get the opportunity to apply and go, then go," she says, "because it is going to show you something about the world that you didn't know existed." Adds Eaton, "If you don't get it, apply again. Apply until you can go."