Information systems professor keeps abreast of – and contributes to – research 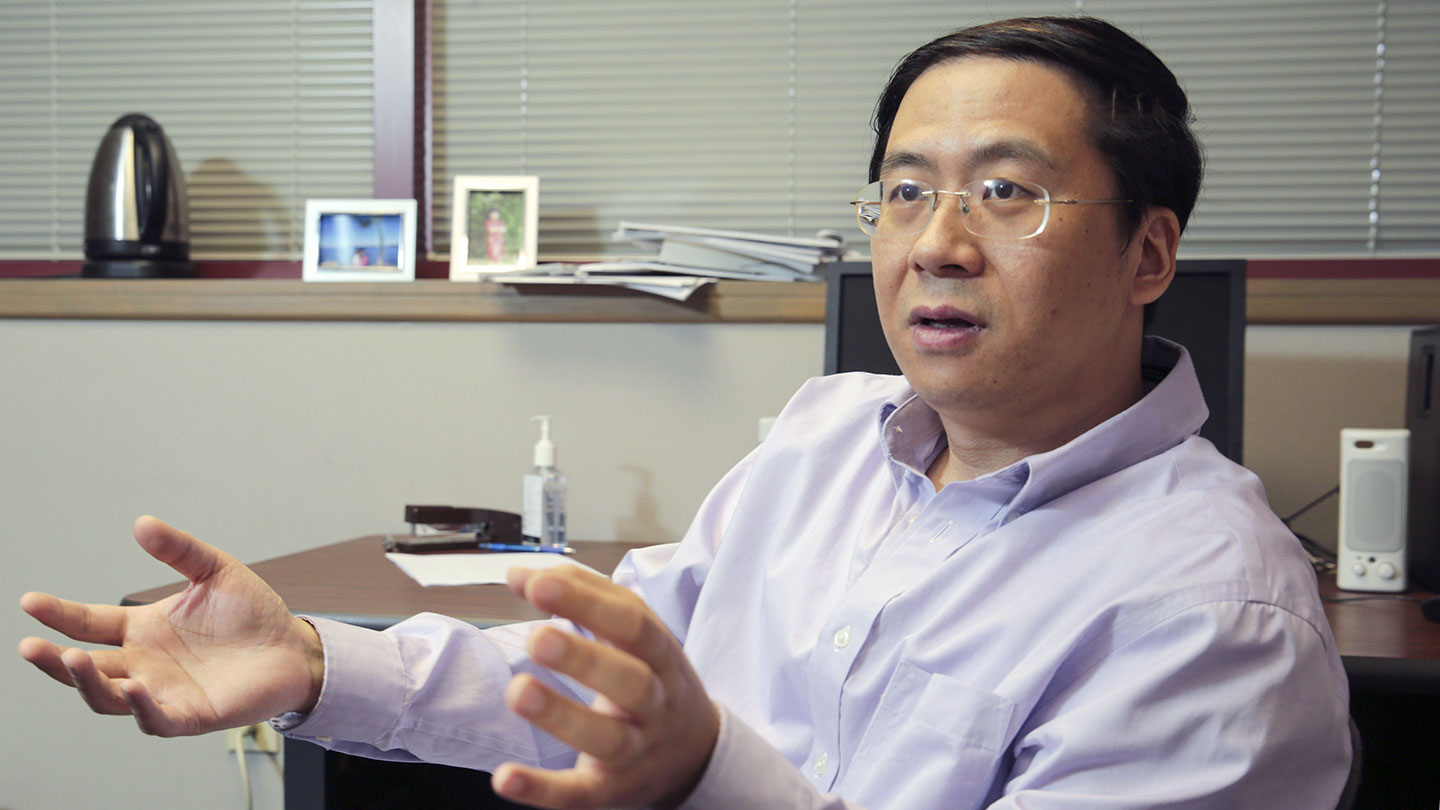 Dr. Xiaotong Li is an associate professor of Information Systems in the College of Business Administration. Michael Mercier | UAH

HUNTSVILLE, Ala. (June 18, 2014) – Dr. Xiaotong Li is not unaware that game theorists like him have won more than ten Nobel Prizes in Economics over the last 20 years. But the associate professor of Information Systems has set a much more modest goal for his research into the field. "I just do it for intellectual curiosity," he says. "This is a mainstream theory, so mainly I wanted to contribute to it, even if it's a very minor contribution."

Thus far, however, his contribution has been far from minor. Since arriving at The University of Alabama in Huntsville (UAH) in 2001 Dr. Li has published a dozen journal articles and has two more in press: "Relational Contracts, Growth Options and Heterogeneous Beliefs: A Game-Theoretic Perspective on IT Outsourcing," in the Journal of Management Information Systems and "Externalities, Incentives and Strategic Complementarities: Understanding Herd Behavior in IT Adoption," in Information Systems and e-Business Management.

"It's intuitive but it's difficult to model mathematically. And without a model, you can't rigorously analyze what's going to happen if something changes," says Dr. Li. Fortunately, there's a silver lining. "You don't have to assume that everyone is irrational. You just have to assume that a small portion of the population is irrational to produce many new business insights."

The recent financial crisis is a perfect case in point. "We know that most players in the stock market were rational, but there was a small group that made huge mistakes – they underestimated the risk or didn't know what they were doing," he says. "That made the vast majority change their strategy and the result was a market collapse."

But while some researchers conduct experiments and gather data on those behavioral anomalies, that is not Dr. Li's area of expertise. "I'm a modeler so I incorporate these behavioral anomalies into the assumptions of my models," he says. "That's the difference between empirical and theoretical research – you don't have to have a lab or a supercomputer to build a game theoretic model."

The one thing you do have to have? Time, which is where Dr. Li's second sabbatical next year comes in. "I won't teach, but I will stay here to develop my theory and work on my model – I have a new idea and I want to put it in papers," he says. Ultimately, his goal is to "get a stream of papers published in premier business journals, like three or four, and establish my research." Then, he says, "I can apply for a grant to fund my theoretical research."

That's the difference between empirical and theoretical research – you don't have to have a lab or a supercomputer to build a game theoretic model.

A sabbatical will also give him more time to spend with his wife, who works alongside him in the College of Business Administration as a senior research coordinator, and his 12-year-old daughter, a student at Discovery Middle School. "I coach her in math and she's won the top three in many state and regional math competitions," says Dr. Li, "but she wants to be a designer – she really likes drawing. She represented the state in a national PTA virtual arts competition a few years ago and won first place."

Until then, Dr. Li will continue to maintain his current teaching schedule, which includes classes in information systems, computer forensics, informational security, and data management. And thanks to a teaching innovation grant from the College of Business Administration, he'll revise the curriculum for the college's effort to offer more – and more up-to-date – courses in data mining and business analytics.

"Before, you could put everything in an organized structure called a database. But now because of this explosion of big data, you have a lot of unstructured data that you can't organize the same way," he says. "It's like a gold mine, but without the proper tools, you can't analyze it. So we're teaching our students to be data analysts to get a competitive advantage."

That, of course, requires Dr. Li to stay abreast of the field himself, which isn't an easy feat given how rapidly it's growing. "When I was in graduate school, we didn't learn those things!" he says. As a result, many of his extracurricular duties include traveling to conferences, reading books and journal articles, and testing the latest and greatest in specialized software.

All of which leaves him little time for one of his favorite hobbies – fishing for stripers at the Guntersville Dam. "They're huge," he says. "Sometimes I throw them back, but occasionally my wife will cook them." Though whether Dr. Li will some day reel in the biggest catch of all – a Nobel Prize – is something he doesn't spend too much energy thinking about. "Maybe," he laughs, "in my daydreams."