In helping others, UAH student learns lesson “no college class can teach” 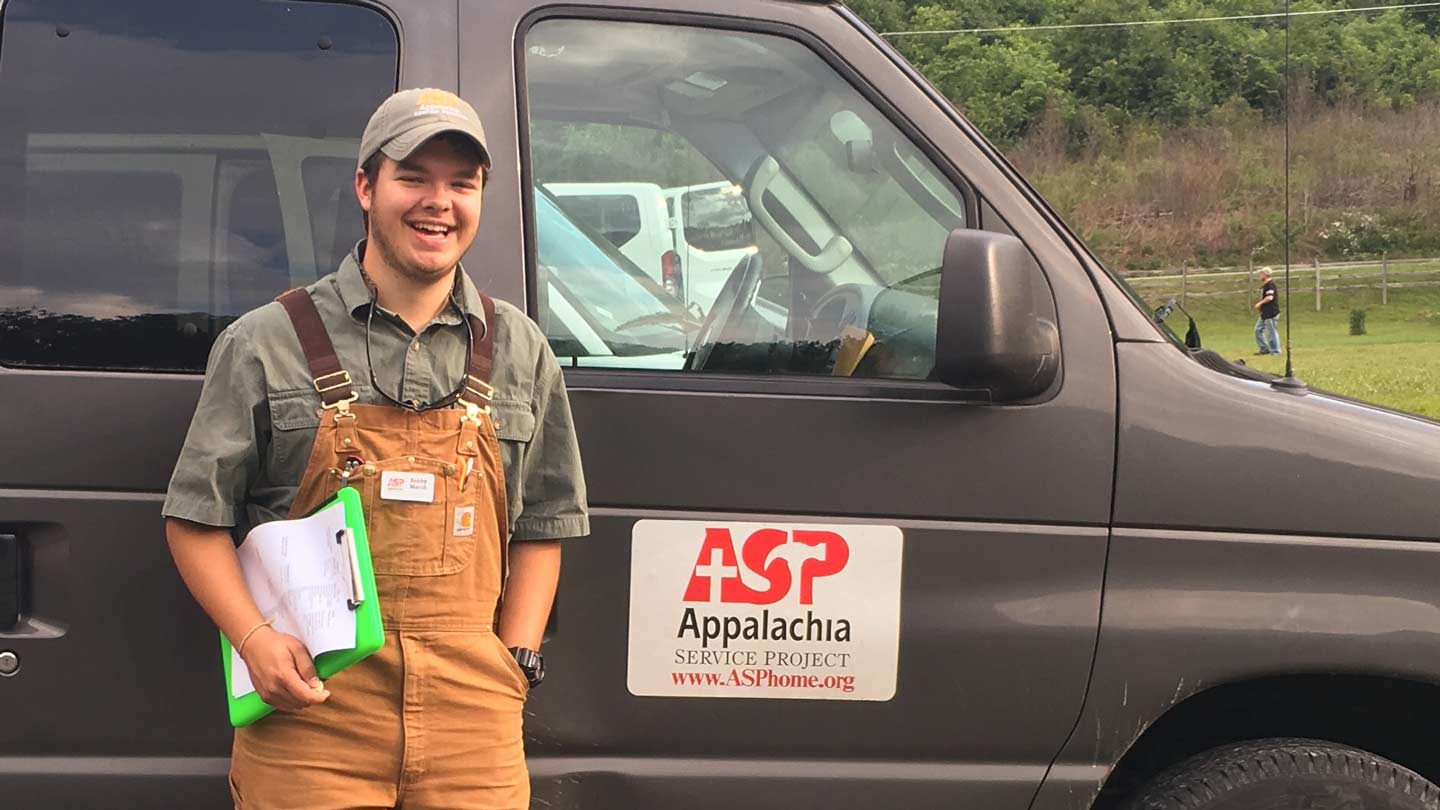 After volunteering with the Appalachian Service Project for several years as a high school student, UAH sophomore economics major Bobby Marsh spent this past summer working as an operations coordinator for the Christian home-repair ministry.

Relationships are not just important to Bobby Marsh. They're paramount. So when he arrived on campus at The University of Alabama in Huntsville (UAH) and "felt needed and welcome from day one," he knew he had made the right choice. "The students and faculty truly make you feel like you are joining a family," says the sophomore economics major. "That was a feeling that I had not experienced from other universities."

That same sense of community is what also inspired Marsh to begin volunteering with the Appalachian Service Project (ASP) as a high school student. A Christian home-repair ministry, the organization mobilizes volunteers to help build homes in underserved counties across Tennessee, Kentucky, Virginia, West Virginia, and North Carolina. "My core values and beliefs matched theirs perfectly," he says. "While the projects are important, ASP believes that the relationships formed between volunteers and the families they serve are even more significant."

As the years passed, however, he began to realize he had more to give. "It became clear that I was being called to a leadership position within ASP," says Marsh. "Here was an organization that didn't care where you came from, what you wore, or how much money you had in the bank. I loved this unconditional form of service." So last summer he set out to become an ASP staff member, which required him to complete not just a written application and several phone interviews, but also to participate in a weeklong 'staffer-in-training' program.

They taught me the tremendous value of the simple things in life, and that is a lesson that no college class can teach you.

"It was an extensive process!" he says. But his tenacity paid off, and this summer, Marsh was hired on to spend 12 weeks as an Operations Coordinator at Camp Laurel in Rocky Gap, Va. "I believe I was chosen because of my passion, my dedication, my work ethic, and my leadership capabilities," he says. Among his many responsibilities were ordering enough food each week to feed the 65 volunteers assigned to the various job sites, managing the three cooks responsible for feeding those volunteers, maintaining the two ASP vehicles used on the site, and supervising emergency home-repair projects.

"My entire UAH experience prepared me for this job," he says. "With so many things going on at once you have to be able to multitask, so the organizational and time management skills I learned as during my freshman year helped me tremendously." Not that Marsh didn't face the occasional setback. "There is a saying among experienced ASP staffers that it will be the hardest summer that you will ever love," he says with a laugh. "And I experienced many different challenges!"

Thankfully, with the help of his "amazing staff," Marsh was able to tackle those challenges head on. "You will always have things that you must overcome, even if the solution may be out of your comfort zone," he says. "This position provided me with the confidence to step up to the plate even when the going got rough, and taught me to overcome challenges in a professional manner. It was an invaluable experience for me to learn firsthand what managing other people is like."

Yet for all the skills that Marsh picked up on the job, it was the education he received from those he had been sent to help that proved the most meaningful. "While I may have made a small difference in the lives of the homeowners that we worked for this summer, they continue to make a major difference in my life," he says. "They taught me the tremendous value of the simple things in life, and that is a lesson that no college class can teach you. You just have to experience it in the smiles of those that you serve."

Indeed, he often struggled with the fact that he couldn't do more. "I was living in one of the most beautiful regions on Earth with an endless amount of mountains and streams and trails, yet the extreme poverty of the area was truly shocking," he says. "You begin to fall in love with the people of the region, and after hearing their stories, you begin to realize that even though we come from different backgrounds, we are all very similar. It made me want to learn more about what we can do as a society to rehabilitate the economy there."

It's a sentiment that epitomizes the ASP motto, which encourages people to act responsibly in the face of human need and injustice. And it's also one that will no doubt continue to inspire Marsh, who hopes to pursue a career in law after graduating from UAH. "My favorite quote is from author John Gordon, who says 'Your legacy is not left in the things you leave behind, but in the hearts and lives that you touch'," he says, before offering some advice of his own. "Your college experience is about so much more than having a good time on the weekend. Open doors await you around every corner. All you have to do is be willing to take that first step."