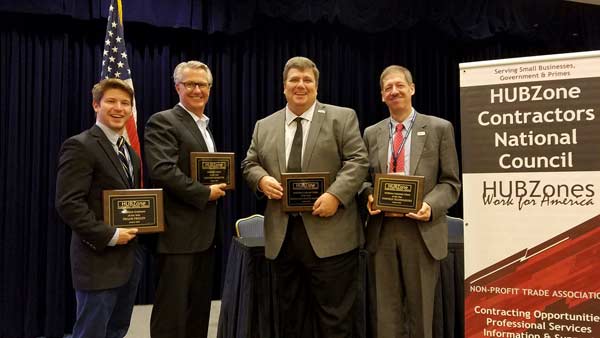 The HUBZone Contractors National Council selected an alumnus of The University of Alabama in Huntsville (UAH) as its national Employee of the Year.

Taylor Presley, a December 2015 aerospace engineering graduate, was the HUBZone Council’s choice for the honor. His nomination criteria included supporting others, community involvement, benefits received from the HUBZone program, and promoting HUBZone program values and spirit.

As a UAH student, Presley was picked to be the first to work in a new internship program at his employer, HUBZone certified business Mission Driven Research (MDR) in Huntsville. A United States Small Business Administration (SBA) program, HUBZone certifies small companies that operate and employ people in Historically Underutilized Business Zones (HUBZones).

A native of Nashville, Presley is an aerospace engineer at MDR. He officially received his award at the National HUBZone Conference Oct. 12-13, 2016, in Chantilly, Va., near Washington, D.C.

"I didn't know what was going on when I was told about the award," Presley says. "I had gotten some messages from Chris Gordon, the CEO of MDR, a couple weeks before, asking if I had any plans for one specific weekend in October, and to not make any. He didn't provide any more information."

Then came the surprise.

"When it sank in, I was incredulous," says Presley. "Not only had Chris taken the time out of his day to fill out a long form and nominate me, I had actually been selected to win an award – I was 10 months out of college!"

Gordon’s nomination stated that Presley was identified as a leader while an intern at the company, where he organized and planned its research and development team, trained to submit Small Business Innovative Research (SBIR) proposals and supported an SBIR contract, among other tasks. After his internship, Presley was selected for a full-time position and moved on-site with the government customer.

"He has been in this position for one year and has continued to perform well above his job requirements, volunteering for new opportunities as they arise," the nomination states. "Mr. Presley is active in his community. He volunteers on a regular basis with a local non-profit that works with the homeless community and other less fortunate people in the city."

Presley has supported the prioritization of the HUBZone Program at Mission Driven Research, his nomination says.

"He has maintained his residence within a HUBZone, even after completing college and experiencing a significant increase in pay," the nomination says. "He has worked with the company to identify additional HUBZone residents that he referred to open positions at that company, as well as enabled coordination between the company and the career counseling center at the university he previously attended. He has developed concepts for future non-profit activities that he plans to initiate. He is destined for success professionally and stands to become a strong positive force within the community."

"Candace Phillips is literally the reason I'm where I am today. I would go into her office and bug her about internships, working on improving my resume, until one day she told me she had gotten me two interviews that week," Presley says. "As an introvert, I was terrified, because I don't consider myself great at interviewing by any means, I just knew it was what I needed to do."

The interviews resulted in offers from Boeing and MDR.

"I chose the high-risk startup, and they chose the ‘confident frat guy’ – as my MDR colleagues frequently remind me – and I haven't looked back since. I got my dream co-op, a parallel co-op, which I had been told was very hard to find. I didn't want to take semesters off school to work, and this was perfect for me."

He says MDR has been extremely supportive of his entrepreneurial tendencies.

"Chris has been an amazing mentor, and very supportive of me starting and building a digital marketing company on the side this past year," Presley says. "The digital marketing company specializes in helping small businesses with their Search Engine Optimization. It's a complete 180 from the type of engineering work I'm used to, but I've fallen head over heels for the data analytics side of marketing, and I'm using it to consult for small businesses in Huntsville."

"I'm extremely proud to be a part of this amazing company, and honestly thankful for everything they've done for me after they took me under their wing," Presley says. "I wouldn't be where I am without them, and I definitely never would have won that award."