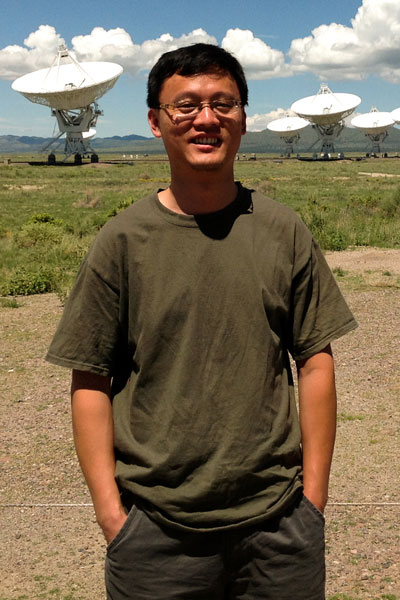 Xiaocan Li near an antenna array in New Mexico.

HUNTSVILLE, Ala. (Aug. 20, 2013) – Xiaocan Li, a graduate student in the Dept. of Physics and the Center for Space Plasma and Aeronomic Research (CSPAR) at The University of Alabama in Huntsville (UAH), has been awarded a NASA Earth and Space Science Fellowship (NESSF) for the 2013-14 academic year.

His proposal was one of six awarded from a total of 37 heliophysics research applications NASA received. He recently concluded work as a summer intern at Los Alamos National Laboratory in New Mexico. Xiaocan Li works with his advisor, assistant professor of physics Dr. Gang Li, on particle acceleration mechanisms at solar flares. Solar flares are the most powerful radiation source in our solar system and understanding particle acceleration at solar flares has been a central topic of space plasma physics. Li is focusing on a chaotic magnetic field model and a 3-D magnetic reconnection model.

"Magnetic reconnection is a very efficient process to transform the magnetic energy to kinetic and thermal energy of plasma," said Xiaocan Li. "It can accelerate particles to very high energies by inductive electric field, magnetic island contraction and/or coalescence, Alfvenic outflow and termination shock induced by outflow during magnetic reconnection." Together with his advisor, Xiaocan Li is now developing a Particle-in-Cell (PIC) code to study the importance of these mechanisms in solar flares.

Born in Henan province of China, Xiaocan Li received his bachelor's degree in engineering from Tongji University in Shanghai. After graduation he joined Peking University and studied space physics, finishing with a master's degree from Peking University in Beijing in 2011. He joined Dr. Gang Li's group at UAH to study particle acceleration in solar flares in the fall of 2011. "I have been longing to study solar and heliospheric physics at UAH for a long time. The Center for Space Physics and Aeronomics Researches (CSPAR) has some of world's best researchers in the field of heliospheric physics and Huntsville is a very amicable place to live. I am very happy to have the opportunity to come to UAH and to join the CSPAR and the Physics department. "