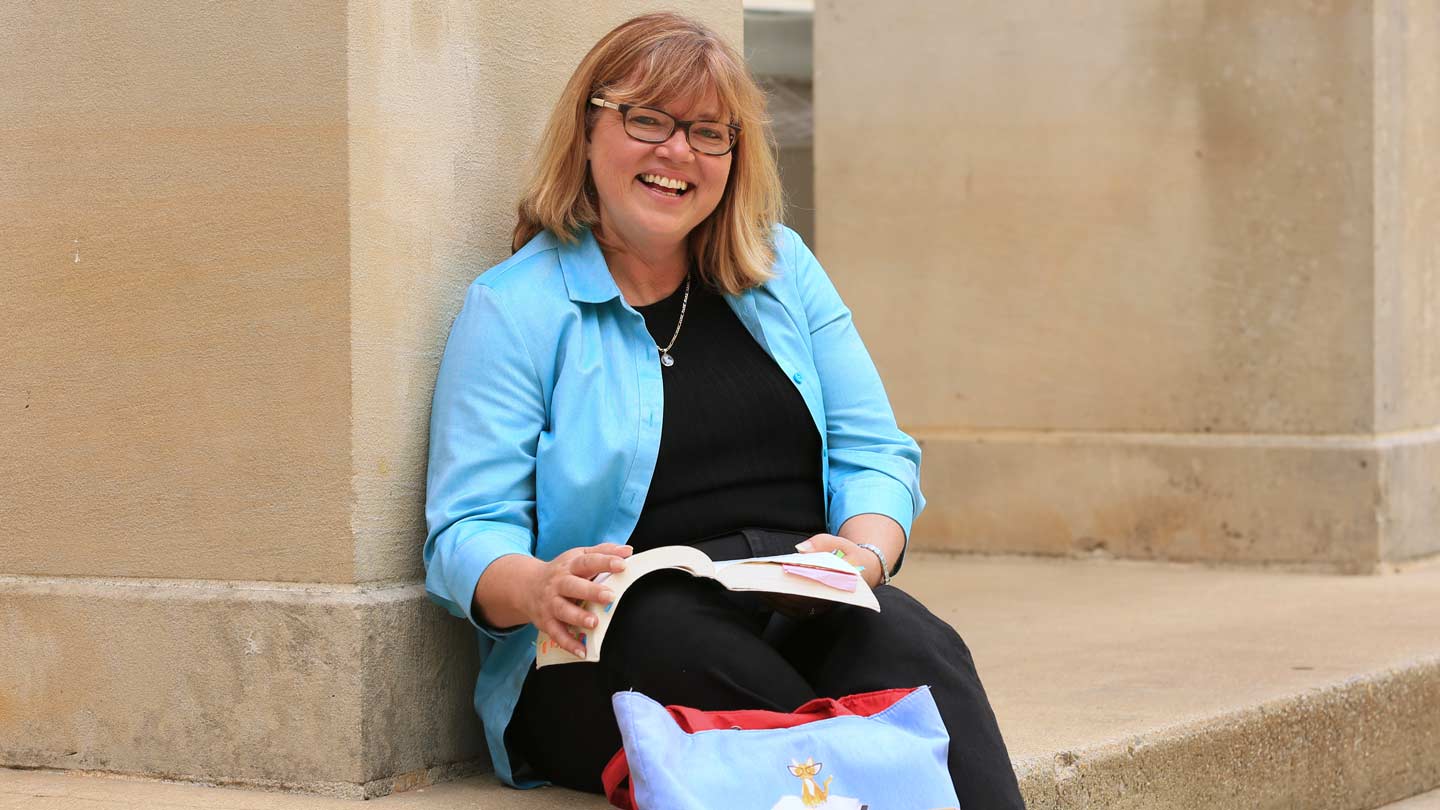 Kathleen "Kat" Padilla, U.S. Naval Officer (retired) graduates on Sunday, May 7, with a master's degree in English from UAH.

The thought of earning the "big bucks" completely disappeared when graduate student Kathleen "Kat" Padilla realized what she wanted to do with her hard-earned master's degree in English from The University of Alabama in Huntsville (UAH).

"Although I initially started college to be a middle school teacher, I realized that what I really wanted to do was teach adult education and GED (General Educational Development) studies," Padilla said. "I wanted to share my newfound love of learning with others who also may not have 'done it right the first time'. I have quite a bit in common with these non-traditional students."

Padilla graduates from UAH on Sunday, May 7. Eileen P. Drake, Chief Executive Officer, President and Director of Aerojet Rocketdyne Holdings Inc., will deliver the spring commencement address. UAH is expected to award more than 800 diplomas at its spring graduation ceremony, 597 bachelor's degrees, 232 master's degrees and 24 doctoral degrees. Drake will be awarded an honorary Doctor of Science degree from UAH during the ceremony.

A SOTA (Student Over the Traditional Age), and native of New Hartford, CT, Padilla retired as a U.S. Navy Electronics Technician Chief Petty Officer (Surface Warfare), after 20 years of service.

After leaving the military, Padilla was in her “I just want to retire” phase. "A friend asked me to teach a Junior Achievement class at the local high school. I had forgotten how much I enjoyed teaching. So, with my husband’s urging, I made the decision to attend college at the age of 42 to become a teacher.

Padilla began her college studies at Calhoun Community College (CCC) taking general education classes. She admits deciding on a major was extremely difficult for her, because she was torn between literature, science, and history.

"What I found as I delved deeper and deeper into English studies was a discipline encompassing all of the others. Knowing history and science is imperative to understanding literature," Padilla explained. "Additionally, more than any other subject, I found I enjoyed the discussions in my English classes. Literature was not just about facts and experiments, but bringing in personal experiences into everything we read. Because my personal experiences were extremely divergent from most others, I found the discussions in class enabled me to get different perspectives about life. While I enjoyed many classes, I found these discussion-based learning environments suited me more than lecture-based classrooms."

If Padilla thought attending graduate school would be formidable, she soon learned, it was just the opposite.

"What I found at UAH was passion. I loved going to classes and soaking up the passion that my professors had for their areas of expertise," Padilla said. "Every professor I had at UAH loved what they did. It showed every time I came in contact with them. They all provided a classroom that allowed students to voice their thoughts and opinions, and they also took the time to know each student. Their offices were always open to discuss not only assignments but also different areas of study and further research that could be done. They, too, were always learning."

While the big push is on nationally for incoming college students—especially young women—to seek careers in Science, Technology, Engineering and Mathematics (STEM) fields Padilla, whose U.S. Navy profession was based on technology, repairing complex RADAR systems and setting up communications, said there is more to STEM careers than meets the eye.

"What I would tell prospective students is that the more technology takes over, the more there is a need for those who specialize in the Liberal Arts. Communication skills are needed more now than ever." Padilla said. "Writing test reports requires someone who can write clearly and concisely. These individuals need to have an understanding of the engineering and testing behind the reports. The ability to speak clearly and concisely is needed not only to communicate the next steps required in a research environment, but also receive the funding and grants necessary to continue the research. Additionally, when one moves up into the ranks of management, there is a need to understand the people that work for us and with us. All individuals need to remember we are human. We need music, art, and literature to keep us there."

Padilla noted that while she was good at her job in military systems repair, she always ended up training and teaching others. "While I believe the STEM subjects to be important, ultimately, there is always a human behind every type of technology. We can’t ever forget that. There is always a person on the other end of the telephone, flying the plane, controlling the drone, or receiving the medicine. To lose the humanities is to lose the reason STEM is so important."

She is absolute in her belief that the UAH College of Arts, Humanities and Social Sciences prepared her for future career endeavors. Although Padilla had taken a college class or two while in the Navy, she said, "I always felt real-life experiences trumped a college education every time. In fact, if someone had told me 10 years ago I would shortly be graduating college with a master’s degree, I would have laughed at them. Luckily for me, I have had professors at every level, undergraduate and graduate, who have inspired and pushed me to be more than I ever thought I could be. I have been to some exciting places and done some amazing things in my life. What I realized was that a college education actually enhances every real-world experience I have ever had. I wish I could now go back to some of the many places I visited—Rome, London, Munich—with the knowledge I have now."

Padilla teaches Developmental English at CCC and is the Office Manager for Sigma Kappa Delta, the National English Honor Society for Two-Year Colleges. Although she does not plan on leaving either of these jobs, she has found a confidence that she did not have before. "UAH challenged me, and, having succeeded, I am a better teacher and manager than I was before."