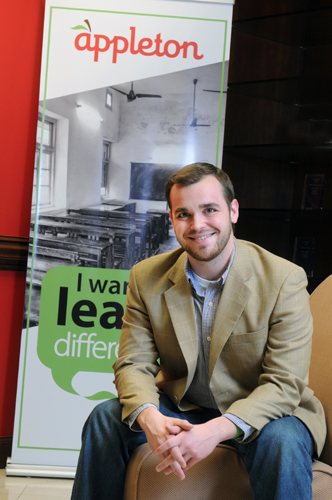 HUNTSVILLE, Ala. (March 12, 2012) — While many college students spend their spare time playing ultimate Frisbee or attending parties, Glenn Clayton spent his free time starting a company from his dorm room at The University of Alabama in Huntsville.

Seven years later, that company, Appleton Learning, now employs 1,000 tutors and provides 6,000 students with tutoring and test preparation classes. And just this year, Clayton was named Entrepreneur of the Year by the Huntsville/Madison County Chamber of Commerce. Not bad for someone who, by his own admission, went into business because he was broke.

Clayton said he never intended to turn his company into his career. “I just figured tutoring would be a way to help make some extra college cash.” Before long, however, the management major soon realized that he was getting more fulfilment out of the classes he was teaching than the classes he was taking. “Once I got started, I really became passionate about improving education,” he says. “I saw that a lot of kids weren’t getting what they needed in traditional classroom settings, and I wanted to do something about it.”

That’s when his “sideline tutoring business” became a “60-hour-a-week passion,” and Clayton found himself at a crossroads: finish his college education or leave UAHuntsville and focus on growing his company. Making the choice even more difficult was the fact that Clayton’s tuition was covered by a scholarship, whereas Appleton Learning at that time “was not making any money!” He decided to turn to his business school advisor for help. “He told me that, whatever I decided, to be sure it was a decision that I wouldn’t regret 20 years down the road,” says Clayton. “After hearing that, I knew I had to dedicate my time to my passion.”

It was a smart choice. Appleton Learning has experienced amazing growth over the last few years, with plans to open a new Huntsville location in Jones Valley in addition to six franchises in Houston, Texas. And Clayton himself has received considerable recognition despite being all of 24 years old – an age at which he says “you don’t realize just how much you don’t know, and you’re crazy enough to think you can do anything even when others think you can’t.”  He was recently named one of the country’s best young entrepreneurs by Bloomberg BusinessWeek, in addition to winning the aforementioned Entrepreneur of the Year award.

And even though he never graduated from UAHuntsville, “a lot of what I learned there, I still apply today,” he says, crediting college with being “a place for creativity and risk-taking in pursuit of ideas, where some of the best lessons have to be learned outside of a classroom.” That’s why he continues to give back to the school. “Appleton Learning does an internship program for business students, and I speak to classes and have served as an honorary professor of business,” he says. “I also work closely with several incredible folks in the Education Department to collaborate on projects.”

That’s a significant commitment when you consider that Clayton originally decided to come to UAHuntsville “because it was one of the few schools that would accept me, and my girlfriend at the time lived in Huntsville!” Little did he know then just how much UAHuntsville would contribute to Appleton Learning in the long run, from providing a space for his nascent company – “dorm rooms may not be traditional business office settings, but they are actually a great place to start a business” – to giving him access to the great business minds on campus. “One professor in particular, Bryan Dodson, became a mentor and coach for me,” he says. “He taught the Entrepreneurship 101 course a couple nights a week. I learned a tremendous amount from him.”

As for what advice Clayton would give to students now, given the fact that he decided to leave school early to pursue his business career, it would be the same as his college advisor gave to him: “Make decisions in a manner so that you don’t have any regrets.” For some, that means staying in school. “A lot of people do need to graduate in order to pursue their passions,” he says. But for others, like Clayton, it means following their dreams even when you don’t know where they will take you. “Don’t just pursue a degree,” he says. “Pursue a passion and take whatever road gets you there.”