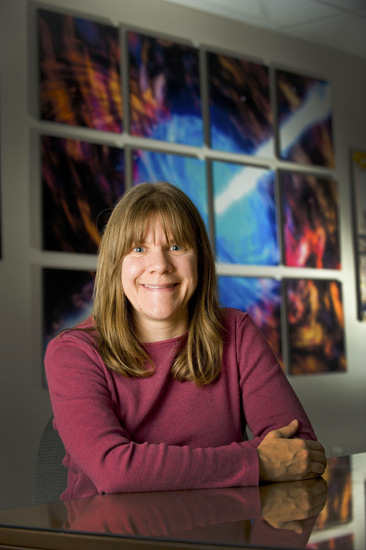 HUNTSVILLE, Ala. — It was a year ago that the combined data from several NASA satellites astonished astronomers by revealing unexpected changes in X-ray emission from the Crab Nebula, once thought to be the steadiest high-energy source in the sky.

"For 40 years, most astronomers regarded the Crab as a standard candle," said Colleen Wilson-Hodge, an astrophysicist at NASA's Marshall Space Flight Center in Huntsville, Ala. “Now, for the first time, we're clearly seeing how much our candle flickers."

The Crab Nebula is the wreckage of an exploded star whose light reached Earth in 1054. It is one of the most studied objects in the sky. At the heart of an expanding gas cloud lies what's left of the original star's core, a superdense neutron star that spins 30 times a second. All of the Crab's high-energy emissions are thought to be the result of physical processes that tap into this rapid spin.

Wilson-Hodge, who earned her undergraduate degree from the University of Arkansas, and received a master’s and a Ph.D. in physics from UAH, presented this discovery last year at the annual American Astronomical Society meeting.

What follows is an interview with Wilson-Hodge by Janet Anderson, a public affairs officer at Marshall Space Flight Center, and a 2007 communication arts graduate of UAH.

I became interested in astronomy as a child, when we first started talking about the planets in school and the Voyager missions going to Jupiter. There were many articles and photos in the newspaper and I would collect them all. The type of astronomy I ended up pursuing as a career is very different, but the interest stayed with me ever since I was a child.

Did your interest continue …through high school, college?

Yeah, it did. When I was in 3rd grade, I had a backyard telescope that could look at craters on the moon.  By high school, I got a larger telescope that could actually spot the Orion Nebula, Jupiter’s moons and Saturn’s rings. In college, I continued to work in astronomy. … At that point, I thought radio astronomy was what I wanted to do.  I became a NASA co-op student, alternating between going to school and working for NASA. I met Jerry Fishman, who, at that time, was managing the "Burst and Transient Source Experiment," or BATSE, which was about to be launched on the Compton Gamma Ray Observatory.  His excitement about the mission, and about gamma ray bursts, was infectious. This was something that was discovered almost within my lifetime, and I was just really excited and wanted to be a part of that.

Why is it important to study gamma ray bursts?

Gamma ray bursts are the largest explosions in the universe. They put out more energy in a very short amount of time than the sun will in its entire life. Though I don’t yet see a way we could harness that energy, it’s an exciting thing to study -- to learn about energy and about how things work in space. It’s important for our general knowledge, and to stimulate excitement about science, especially among young people. It is vital that we humans try to understand how the universe around us works. And there are certainly by-products from our basic research that can be applied to everyday things. Some of NASA's software techniques have been developed for medical imaging technology, that sort of thing. I have colleagues who have left astronomy to work in medical physics -- they've been able to apply their knowledge to images of cancer instead of images of stars.

What excites you about gamma ray astronomy?

Optical astronomy is quite old. Galileo invented a telescope in the 1600s. Gamma ray astronomy, on the other hand, is a very young field. Gamma ray bursts were only discovered in 1967, just a couple years before I was born, so it’s new science. There are still many new discoveries to be made.

What has surprised you about the gamma ray universe? Has anything come out as part of something that really struck you in your studies that made you sit up and go wild?

It’s fun to look at data from a satellite, to see things happening and know that, for just a little while, at least, I might be the only person watching this, seeing something in the sky change. This new discovery, this moment -- it's just for me. For a little while, until I tell everybody else! But for that moment it’s really exciting to see the universe performing for me.

How important is international collaboration with FERMI and SWIFT?  Do you think partnerships strengthen our missions?

It’s very important, because there is so much talent outside the United States. There are numerous very capable people, funding sources, laboratories and telescopes of different types, at various wavelengths, all over the world. Astronomy research has to be international to work. One country really can’t do it all.  You need observations across the globe. Satellites can do a great deal of your "seeing" for you, but if you need optical observations from ground-based telescopes, you’ve got to have telescopes all over the world to track a newly active transient.

Are there opportunities for young people now who might be interested in astronomy in general or in gamma ray astronomy in particular?

Certainly! There are postdoctoral programs for recent Ph.D.s. And for people younger than that, for undergraduate college students, there are a number of NASA internship and cooperative education programs where they can get directly involved. I actually did gamma ray astronomy as an undergrad and NASA co-op. And for even younger students, there are lots of books to read, so much out there on the Web, and countless things kids can do as science projects on their own. Not just kid stuff, either -- they can access astronomical data from the Web and analyze it and produce their science project for their science fair.