Dr. Emil Jovanov is Alabama Launchpad Inventor of the Year 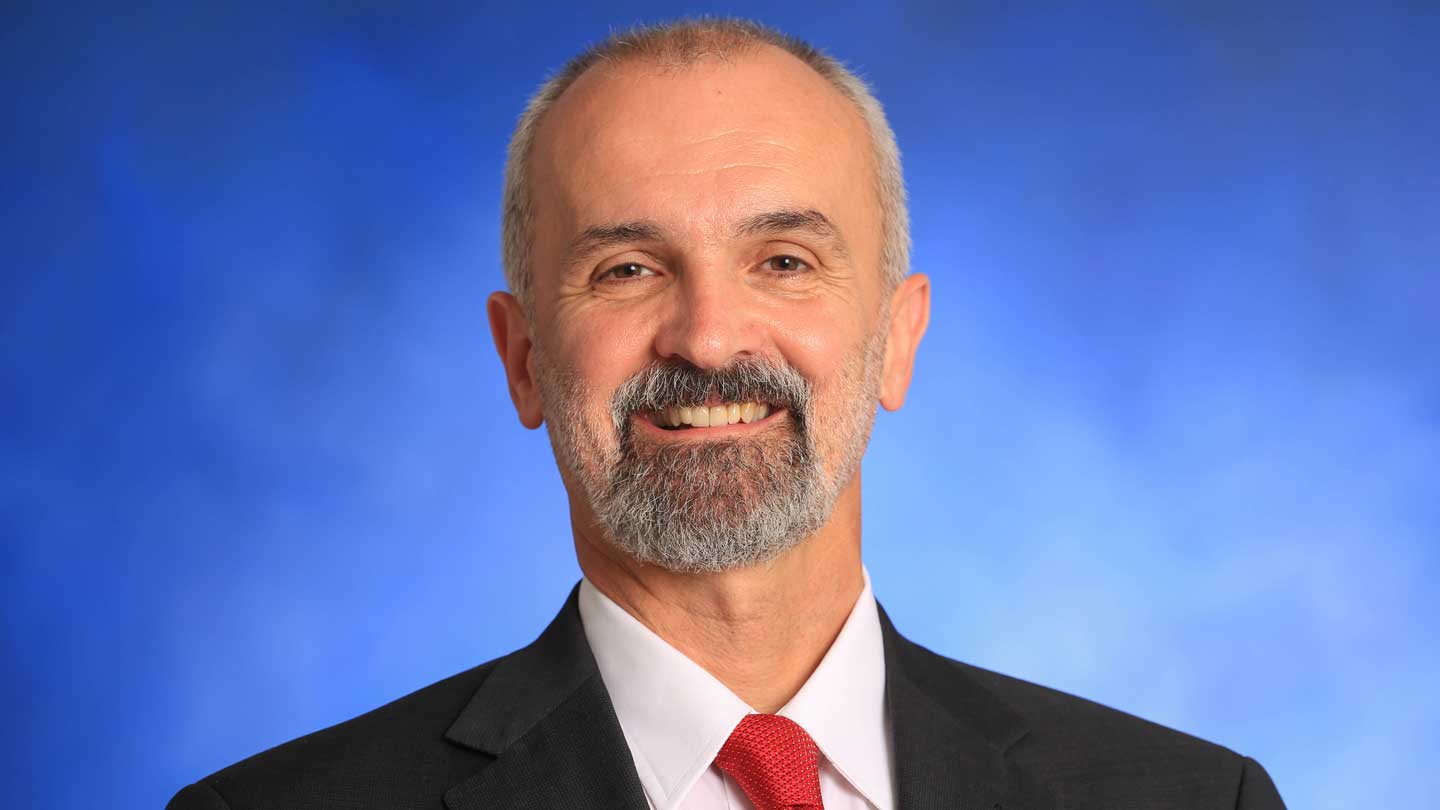 Dr. Emil Jovanov, an associate professor in the UAH Electrical and Computer Engineering Dept., has been named Inventor of the Year by Alabama Launchpad.

In Dr. Emil Jovanov's office hangs a picture of a climber hanging from a cliff by one hand. Below it is one word: Perseverance.

"Whatever you apply your focus to, that is the result you will get," Dr. Jovanov says. "If we focus on science and technology and new discoveries, then we will get new discoveries."

That picture says a lot about Dr. Jovanov, an associate professor in The University of Alabama (UAH) Electrical and Computer Engineering Dept. who has just been named the Inventor of the Year by Alabama Launchpad. Dr. Jovanov's most successful patent is a smart pill bottle that notifies you to take your medication, reminds you if you missed a dose and can alert your doctor or pharmacist if you are missing doses. It's currently in production and clinical testing by patent licensee AdhereTech, which supported and provided data for Dr. Jovanov's nomination.

"I'm extremely humbled by this award and I believe this is acknowledgement of 16 years of my hard work at this university and the hard work of my students, who have stayed many late nights in the lab - as I have stayed many late nights with them - making their projects work," Dr. Jovanov says. "This is also encouragement for the new generation of students to innovate and to develop the entrepreneurial spirit to create new ideas and new companies. As a result, we will improve our state and our society, creating new businesses and jobs as we progress." 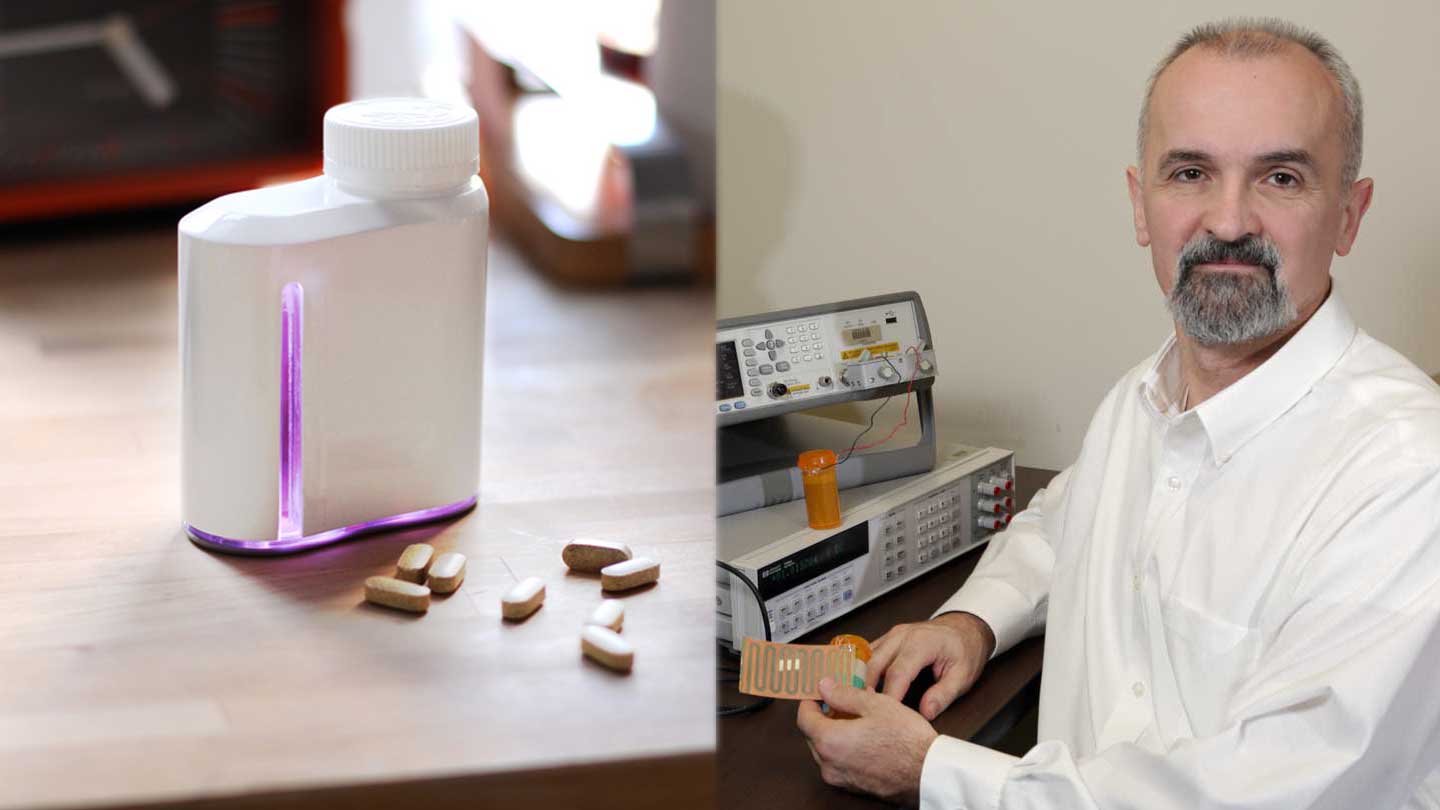 The smart bottle is just one of Dr. Jovanov's mHealth projects, part of a 15-year endeavor that explores and has patented technology innovations that can improve people's health and lives. His lab's spinoff technologies have been pursued by companies such as Huntsville's Halo Monitoring.

In 2000, Dr. Jovanov was the first to propose a system to wirelessly integrate sensors on or in bodies and communicate through the Internet for ubiquitous health monitoring. Today, the number of aging Baby Boomers increases demands on a limited supply of physicians and healthcare workers, who consequently must rely on technology. Mobile health (mHealth) systems proposed by Dr. Jovanov are considered the architecture of choice for a new generation of personalized and predictive healthcare.

"As engineers, we are educated to search for new solutions for existing problems and create new ideas to improve our lives," Dr. Jovanov says. "When you work on a product that can really improve quality of life, it is a great motivator and a great stimulator of the creative process."

Alabama Launchpad's six-person committee of state business leaders made its Inventor of the Year selection by reviewing entrants' technical innovation, business approach, success and intellectual property like patents and trademarks. With other Innovation Awards winners, Dr. Jovanov was honored Thursday, Sept. 25, at an awards ceremony dinner at WorkPlay in Birmingham and will be recognized Friday, Sept. 26, at the Birmingham-Jefferson Convention Complex by Gov. Robert Bentley.

"We are very proud of Dr. Jovanov's achievement and believe this award is deserving recognition of his entrepreneurial skills and his attention to real-world problems," says Dr. Ray Vaughn, UAH vice president for research. "We have a wealth of talented faculty at UAH who are able to use their expertise to move solutions to the commercial market space. We support these efforts and have a strong infrastructure to do so at the university."

Dr. Jovanov says the director of the UAH Office of Technology Commercialization, Kannan Grant, was instrumental in patenting the pill bottle.

"The whole atmosphere in the Office of Technology Commercialization changed when Kannan Grant came, and it became much more aggressive about pursuing patents," Dr. Jovanov says.

"The crucial help of UAH was in encouraging our patent applications and providing legal help throughout that patent process," he says. "The interactions with the lawyer provided a creative brainstorming atmosphere to help create more utility from the patent, more uses for the product."

Grant says the award is a validation of UAH's environment of innovation.

"For the university, it is recognition that we are a research-intensive university and some of our results are important enough that we have been given this recognition, and our faculty member, Dr. Jovanov, as well," Grant says.

Dr. Vaughn says the university is committed to technology commercialization.

"Our Office of Technology Commercialization stands ready to assist our faculty and staff in evaluation, protection, marketing and licensing of intellectual property that they develop," Dr. Vaughn says. "I believe Dr. Jovanov's recognition is evidence of the supportive environment we offer at UAH for our faculty who wish to apply their research and new ideas to the commercialization process."

Dr. Jovanov says his ideas come as the result of brainstorming with others in the healthcare field.

"I have a lot of very good friends who are physicians, nurses or work in the healthcare field," he says. "We often brainstorm on technologies and have discussions on new ideas to help solve problems. My passion is building things that work."

As an educator, he feels it is imperative to involve his students in as many aspects of the process as possible.

"This is part of our social responsibility, to ignite that passion for science and technology in our students and our children," Dr. Jovanov says. "We must encourage them to persist. We must acknowledge their success. And we must treat their success as our own."

The desire to build an interest in science and technology, then to encourage the drive and determination to succeed at it, is something Dr. Jovanov says he got from his upbringing in Serbia.

"In the place where I grew up, my success was everyone's success," he says. "If I succeeded at a math competition, people would see me on the street and stop to compliment me on my success. My success was their success."

He carries that tradition forward by annually bringing five books back to his elementary school in Despotovac, Serbia, to give to the best mathematics or physics students in each fourth through eighth grade class.

"I consider this my social responsibility," he says. "I carry those books for 5,000 miles, and I'm always excited to see how students appreciate our encouragement."

The kind of future he laid out in his seminal paper on wireless body networks is unfolding into reality every day, Dr. Jovanov says, mentioning Apple's iWatch as one example. The new device includes a heart rate monitor and a motion processor to monitor personal activity.

"In today's miniaturized electronics world, real estate in the devices is very hard to get, and yet they have devoted an entire processor to monitoring the activities of the user," he says. "That's a very important message. It is confirmation of the acceptance of the technology. That's the point of innovation. You have to look further than the current horizon of technology and develop ideas that lie beyond it."

Just beyond the horizon he sees full integration of personal monitors with ambient intelligence technology, an effort driven by the "Internet of things" to make a system sensitive and responsive to people. An end result could be home monitoring systems that allow people to stay at home longer as they age and improve quality of life.

"For example, we know that in the case of even minor strokes, walking speed of people changes according to a pattern. The walking speed suddenly drops, and then it will gradually rise again," Dr. Jovanov says. "This pattern can indicate minor strokes leading to a larger stroke. So in your house, you can have sensors in the walls that will automatically monitor your levels of activity and walking speed, and they can warn you in advance that those activity patterns indicate you need to see a doctor. Maybe you will know a week in advance, or maybe a day, but that extra warning time can be very important to your outcome."

Economics and the law of supply and demand will accelerate the integration of technology into healthcare in the future.

"Healthcare is almost 18 percent of our gross domestic product right now and is projected to rise to 20 percent very soon," says Dr. Jovanov. "The field of health is going to be a significant part of our economy for a long time to come, so it cannot be neglected."