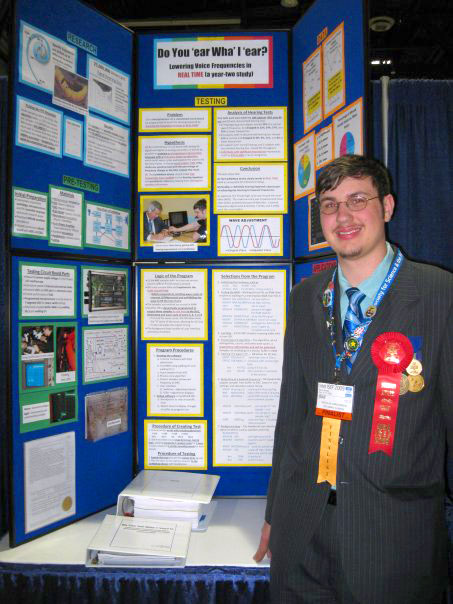 What happens when your academic interests are so diverse that preexisting majors just don't fill the bill? You do what UAH student Nick Christensen did and pursue an Individualized Bachelor of Science, which in his case combines physics, computer science, computer engineering, and mathematics.

"I really want to get into quantum computing, but computers are getting so small now that they're starting to be governed more by laws of quantum mechanics than practical physics," said Christensen. "So my core is in physics, but I'm taking additional coursework in computer science, computer engineering, and math."

Normally, he continued, he would be graduating next year. But because of the amount of coursework required to complete his individual program of study, he will probably be here until the Spring of 2015.

"I actually had a suspicion it would turn out this way, especially when I started adding in computer engineering," he said with a laugh. "I probably could have gone without it, but it's so important for what I want to do."

And what he wants to do is research on either creating quantum computers or coming up with new quantum algorithms. "But I'm more into the hardware level," he said. "I feel that right now, given the state of quantum computing, the algorithms are important but it's more important to get the logic and hardware down first."

It's something Christensen has had considerable experience with already. After all, he's built plenty of hardware over the years, much of which he's presented at robotics and science fairs across the state.

"I've been doing science fairs since about fifth grade," said the Wetumpka, Ala., native. "And when I was in eighth grade I started coming to the Alabama Science and Engineering Fair here in Huntsville. For all five years I entered in the category of computer science."

It's one of the factors that lured me to UAH, that the job opportunities are right there across the street.

But the project that garnered him the most attention, as well as a spot in the finals of the International Science and Engineering Fair during his senior year of high school, was a novel hearing aid that lowers sounds in real time for increased word recognition.

It was a project near and dear to his own heart. Christensen, it turns out, is hearing impaired.

"I was born premature and was on a life support machine. One of the medications I was on was basically ear poison, which damaged my hearing," he said. "But I can compensate well, so sitting in the front of the class is really the only accommodation I need."

And in the end, he said, "everybody is going to lose hearing as they get older. I've already lost the high frequencies, which is what old people lose, so I essentially have a head start!"

To be sure, Christensen's impairment isn't holding him back from doing things that even the most accomplished students find challenging. He currently has a 3.5 GPA despite his heavy course load, and he is working on a self-contained solar-powered water distillation device for his honors project.

"It's a maximum power point tracking solar-power optimizer that uses a microcontroller to automate it," he said. "MPPTs exist already, but what I am doing is adding in a wireless component to be able to transmit operational and environmental data to a computer that you can then analyze." 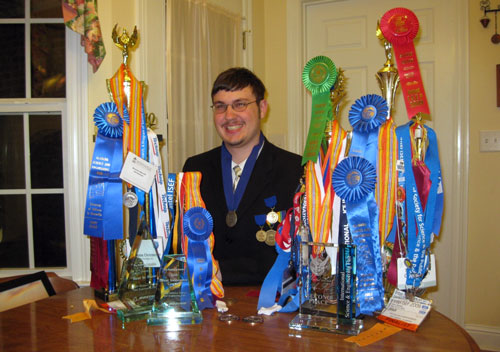 Christensen with some of the prizes he has won for his work.

And if that's not enough, Christensen also founded his own non-profit organization known as Aquosus Potentia (a transliteration of water and power) in the summer of 2010. He and his small staff of volunteers compile, review, and publish college research papers on renewable resource technology online at www.aquopotent.net.

"I'd really like to get the information out," he said. "You might have the best project in the world, but if you can't communicate it to the general public in terms they can understand, what good is it?"

He might want to start with his parents. "They do try to understand, and they can get the basic concepts, but when I focus on any of the math beyond basic algebra, sometimes they can't follow!" he said laughing.

But that's all right. He's got a couple more years to explain to them what he does at UAH before he either lands a high-performance computing job at one of the companies in town or heads to graduate school. Either way, he'll probably be sticking around.

"It's one of the factors that lured me to UAH, that the job opportunities are right there across the street," he said. "But they also have a masters program in modeling and simulation in the College of Science, and I figure that would be important because that's what done in computational physics today."

Whatever Christensen chooses, there's no doubt he'll be staying on his own individual path, just has he has these past few years. If only he could pass basic math.

"Some of my hardest classes are 100-level ones," he said. "Because I'm focusing on studying for the 300- and 400-level classes, I sometimes neglect them!"