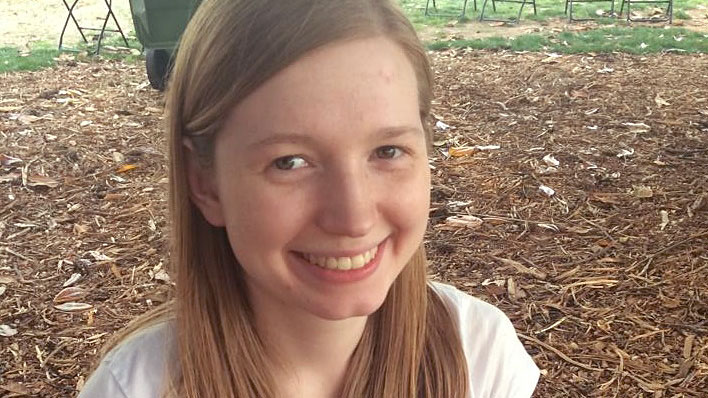 UAH student Lindsey Harris is spending her summer in a co-op position at ADTRAN.

HUNTSVILLE, Ala. (July 7, 2014) – Employers these days want to hire someone with hands-on experience, and that's exactly what Lindsey Harris is going to be able to give them. The rising junior and computer science major at The University of Alabama in Huntsville (UAH) is spending the summer in a co-op position at local telecommunications giant ADTRAN.

"I decided to pursue a co-op position because it provides really great work experience that I never would have gained at school," says Harris, a Huntsville native whose mother also attended UAH and earned a degree in computer science. "And I figured it would give me a higher chance of getting a job faster upon graduating!"

Harris first learned of the position while attending a career fair this past fall on the UAH campus. "I talked to several people, including ADTRAN," she says. "They liked my resume and had me sign up for a follow-up interview, and it went from there." Now she is spending her days "working on assignments that mentors or managers give me, with training and meetings in between."

Yet despite her busy schedule, Harris says there is "less pressure" than she expected going in. "I anticipated having to stress out a bit more, but it's okay if you can't do something right away or if you're not as good at some things as others," she says. "If you don't know how to do something, you can ask anyone on the team, and they will do their best to help you figure out what you need to do."

And even that is a valuable skill that she is learning on the job, given that employers nowadays are placing an increased emphasis on soft skills like communication, teamwork, and problem solving. The problem is, those aren't always easy to teach in a classroom setting, making experiential learning like co-op positions and internships the perfect counterbalance.

"Everything I learn complements my coursework – it's a continuous learning experience," says Harris. "Some things I needed to know from school, other things I could only learn from working, but the two types of learning blend nicely. Already my mentor at work has taught me several things that I never would have learned in school."

I anticipated having to stress out a bit more, but it's okay if you can't do something right away or if you're not as good at some things as others.

A perfect example is the importance of planning ahead when it comes to time-sensitive projects. After all, says Harris, "not everything is like an assembly line. Sometimes you have to wait on other groups to get their stuff done so that your group can continue making progress." And once you catch up? Then, she continues, the group as a whole can "strive to plan better for the next iteration."

Harris herself is already planning ahead. Next spring, she says she will "definitely" pursue another co-op position. "It's a wonderful experience, it's a great way to learn about whether or not you want to do what you're studying for a living, and you can get paid while doing it." And getting paid to do it full time, well, that's the ultimate goal – and Harris is already well on her way.

By the time she graduates, she says, "I will have learned more technologies and have the working experience that is so coveted by employers looking to hire new graduates." Though in Harris' case, the first place she's hoping to go is right back where she is now. "After I graduate," she says, "I want to work as a software engineer – likely at ADTRAN!"