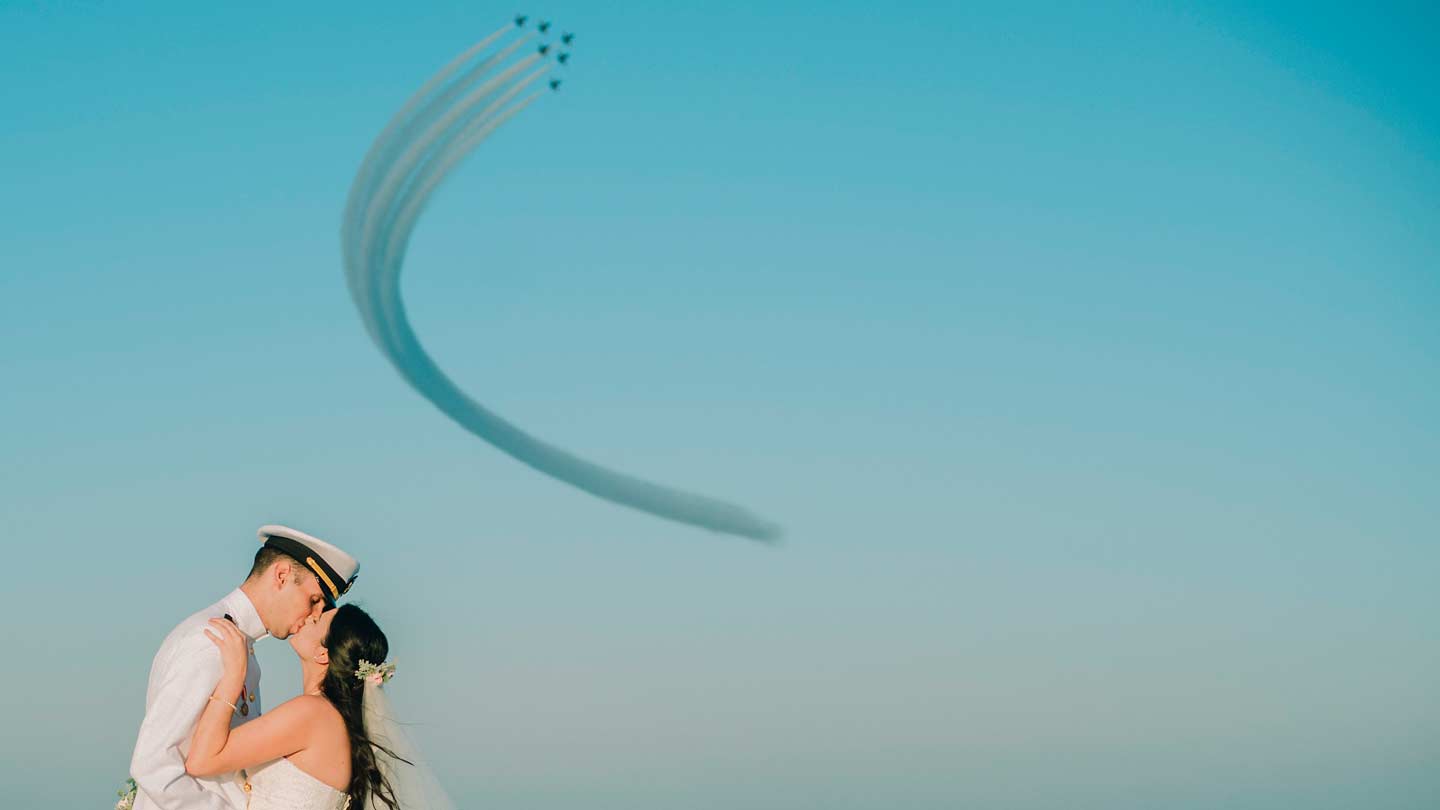 Chandler and Rachel Mills have a picture-perfect kiss with the Blue Angels overhead.

Two University of Alabama in Huntsville (UAH) alumni wound up with a picture-perfect wedding and a bit of national attention on May 14 when by serendipity the U.S. Navy’s Blue Angels flew by them twice as they had photos made after their ceremony.

Newlyweds Chandler and Rachel Mills were having post-wedding photos taken on the beach at Pensacola, Fla., with Ensign Mills in his Naval dress whites, when the unscripted addition to their wedding memories by the Pensacola-based flight demonstration squadron happened.

"We had a small wedding with only family and close friends, so mostly everyone was sticking around for some pictures. We also got married on Johnson Beach, which is part of the Gulf Island National Park, and not nearly as crowded as public beaches – so no people in the background," Rachel says. "After the ceremony, we were taking some pictures and they flew right over us. It happened so fast that I don't think we were able to get any pictures from it."

The photographer was in the middle of a group shot when the planes started coming back.

"We definitely did not expect that. My friends from UAH quickly jumped out of our group shot and Chandler jumped in for the picture," Rachel says. "We didn't even know what they had done when they flew over because we posed for the picture and didn't stop posing until they were gone.

"It would be very cool to think that they saw him in his dress whites and decided to circle back around," she says. "But, more realistically, they were probably practicing a formation for one of their weekend air shows. Either way, they came flying in at a perfect angle and we were able to get some amazing pictures!"

No one in the wedding party thought much more about it until ABC’s "Good Morning America" contacted photographer Jordan Burch.

Chandler Mills and the former Rachel Lee met at UAH, where Chandler was a Sigma Nu and Rachel was a Kappa Delta.

"We had met a couple times at campus events, but were mainly acquaintances. He was also a senior when I was a freshman, so it was gradual," Rachel says. "About a year after meeting, it was finals week in fall semester 2014. I was a sophomore and he had an extra semester as a senior. My friends told me that I needed to get off Netflix and come study with them at the library. When I got there, Chandler and I ended up being next to each other in line at the Starbucks in the library. It was a couple minutes of small talk, a friend request on Facebook, and the rest took off from there."

A Decatur native, Chandler graduated in December 2014 with a bachelor of science in aerospace engineering. Rachel, from Madison, graduated in May 2017 with a bachelor of arts in elementary education and collaborative education. After completing the U.S. Navy’s Officer Command School in Newport, R.I., in late February, Chandler received orders to report to Naval Air Station Pensacola, where he began flight school and the couple resides.

"He will be stationed here for about a year, but we never really know!" Rachel says. "After Pensacola, he will probably be stationed in either California, Virginia, Florida, Washington or Oklahoma."

"Most of the time, new teachers don't start hearing about open positions until late May or June because the schools are dealing with internal transfers and all before hiring new teachers," she says. "I did not expect to hear anything about a position until around June, but I was contacted in mid April. I interviewed via FaceTime and was offered a position as a fourth grade teacher."

While their cool experience made quite a memory, in the wake of all the national media attention Rachel is quick to point out how circumstantial it was.

"When the picture was on big new stations like Fox and ABC, as with anything, there were lots of negative comments about wasting tax dollars," she says. "We didn't take them personally, but a lot of people didn't realize that the Blue Angels are based in Pensacola and fly in each week!"