ATO’s Battle of the Buffalo fundraiser turns 10 this year 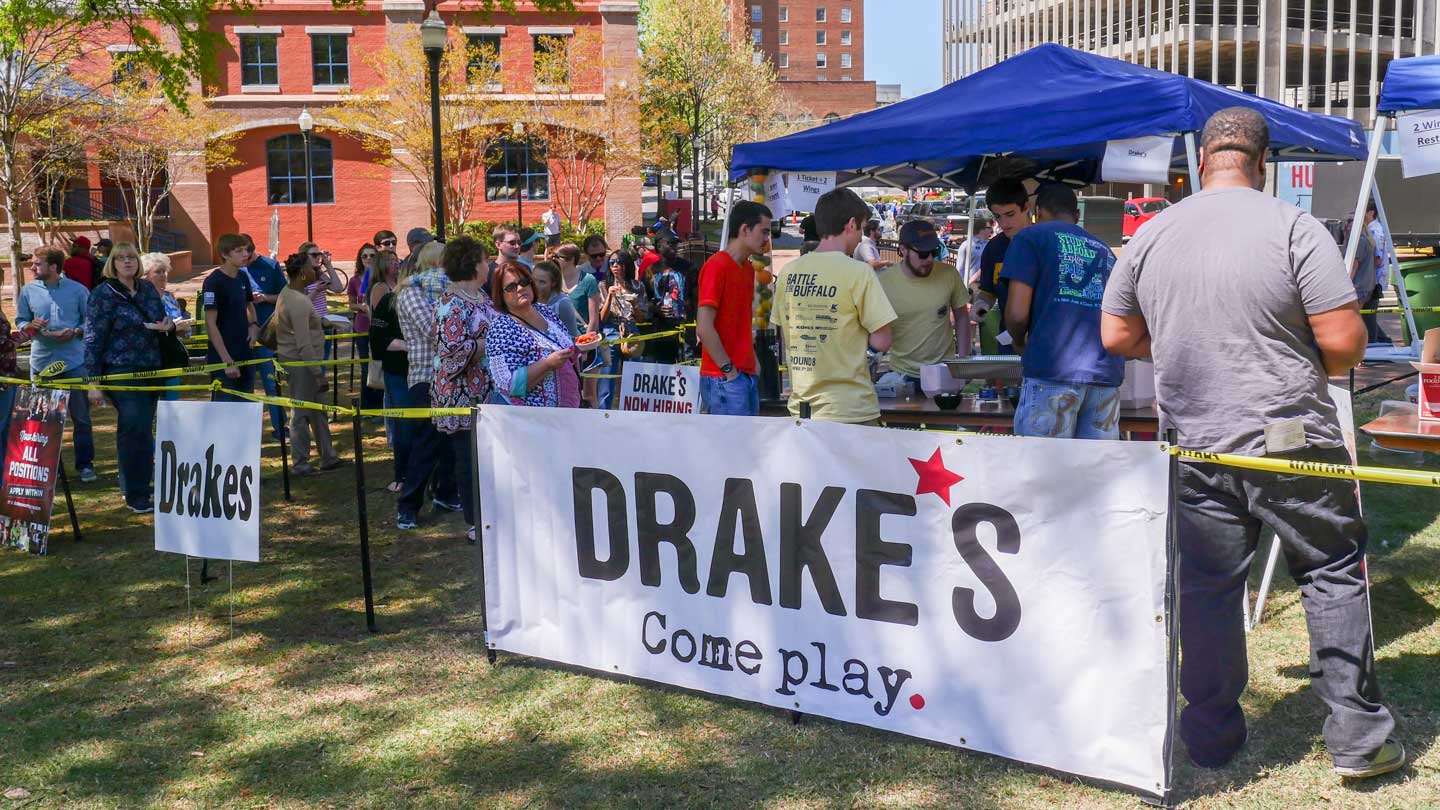 Chicken wing fans at Round 9 of Battle of the Buffalo in 2017.

It started as homage to fraternity brother Paul "Fish" Salmon, who died of leukemia, and now Alpha Tau Omega’s (ATO) Battle of the Buffalo (BOTB) chicken wing extravaganza is going to celebrate 10 years as an annual fundraising event that raises money for cancer research.

BOTB is a chicken wing festival put on by the fraternity at The University of Alabama in Huntsville (UAH) where local restaurants and amateur cooks will compete with their tastiest wings in an effort to be crowned best of the Tennessee Valley.

A ticket includes two pounds of wings and a drink. Also available for sale: t-shirts, koozies, cups, stickers and posters. All profits will be donated directly to the charities. Find out more on Instagram @battleofthebuffalo, Twitter @ATOBOTB, on Facebook page Battle of the Buffalo or at battleofthebuffalo.org

It’s been 10 years of fun, chicken wings and camaraderie that has become one of the largest wing events in the Southeast. But it had a serious beginning, says Jay Johnson, a senior in marketing who is the event’s marketing and merchandising director.

"Brotherhood is the center of every fraternity. So one can imagine losing a friend, a brother, is pretty hard on a chapter," Johnson says. "Paul was selfless and a good brother to all he knew, so our chapter knew it wanted to do something in his honor."

Buffalo wings just happened to be his favorite food, so it felt fitting to his fraternity brothers to host a small event in his honor.

At its core, BOTB is a wing competition, but it also includes a variety of family friendly fun.

"We have a kid's zone with bounce houses and other games, family-friendly music, and this year a spicy wing eating contest," Johnson says. "We also love to partner with local small businesses because this event is for our community, so it should also reflect the community it serves."

Growth has been exponential. In 2009, less than 100 were in attendance. At last year’s event directed by Andy Duncan approximately 2,000 people were served, and the growth should continue this year.

To get an idea of the scope of it, last year, about two tons of wings were served by 12 participating restaurants. Yeah – two tons.

"This is the largest student-organized fundraiser on campus. That is something ATO really takes pride in," Johnson says. "When recruiting, we make sure any potential new member knows that this is what really sets us apart. We’re not the only student organization that is doing impactful work, but I'd like to think that in the past 10 years, Battle of the Buffalo has garnered an impressive reputation and established a strong brand. We are excited to see it continue to grow."

Currently, eight restaurants are confirmed for round 10, and many more – including new competitors – are pending confirmation.

"Last year, we donated nearly $29,000 to Russel Hill Cancer Foundation at Clearview Cancer Institute and Hudson Alpha Institution for Biotechnology," he says. "We are striving to crush that number this year, since it is such a monumental anniversary for the event."

This year’s event includes a history exhibit detailing the last 10 years of BOTB and a letter from Salmon, as well as pictures of the events through the years and information on what donation money has funded.

"We want people to really be able to see what an impact this event has had on the Huntsville community," Johnson says. "In addition, there will be donation buckets, because we want this event to be the biggest and most successful round to date."

In addition to Johnson, the BOTB committee this year is: