As CEO of the USSRC, UAH alumna raises expectations and aspirations of youths 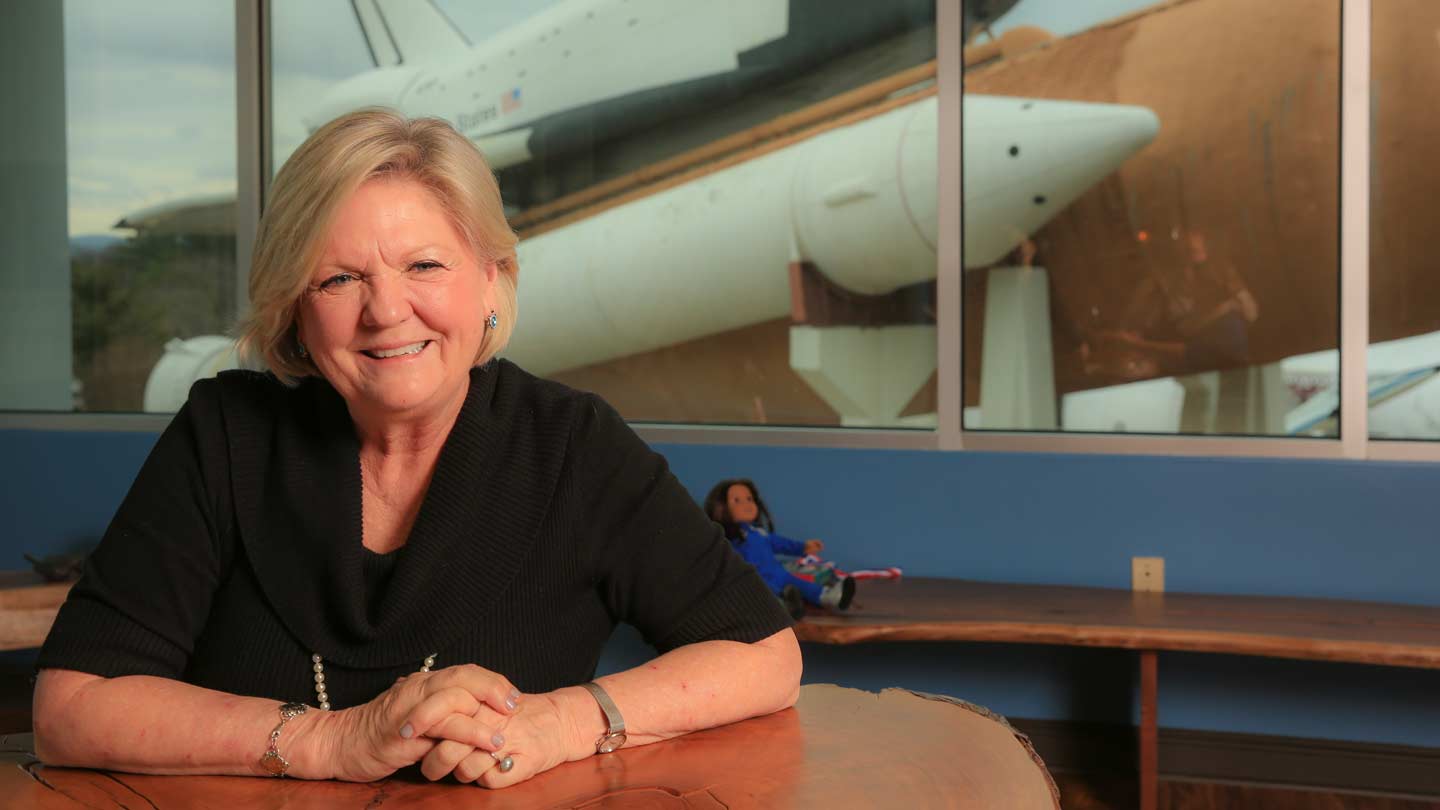 UAH alumna Dr. Deborah E. Barnhart serves as the CEO and executive director of the U.S. Space & Rocket Center, Alabama’s largest tourist attraction and the nation’s largest repository of space artifacts. Pictured in background is American Girl® 2018 Girl of the Year Luciana Vega™, the result of a collaboration between the USSRC, NASA, and American Girl.

As the CEO and executive director of the U.S. Space & Rocket Center (USSRC), the state’s largest tourist attraction and the nation’s largest repository of space artifacts, Dr. Deborah E. Barnhart has to keep an eye on both the past and the future while staying firmly rooted in the present. "We have a mission of preserving those things that come in the wake of discovery, of helping people understand the history of our nation and the accomplishments that technology has brought us," she says. "But we’ve also been putting a lot of time and effort into strengthening our educational foundation, and doing the workforce development necessary to help people continue to make those discoveries. We want to open the door to young children so they know that they, too, can follow in this path."

A key component of that workforce development is the USSRC’s space, aviation, and robotics programs. Of the three, the best known is Space Camp, which has amassed more than 750,000 alumni since opening its doors in 1982. "We started with programs for elementary school students, then added middle and high school programs, and now we have a teacher camp," she says. Thanks to a longstanding partnership with The University of Alabama in Huntsville (UAH), participants in the latter two are also able to earn credit. "UAH has been a critical partner from the very beginning of Space Camp," says Dr. Barnhart, who is herself an alumna of the university. "Having a university partner willing to accredit our programs, which serve as an informal support to formal education, gives us credibility and authenticity."

My friends they were dancing here in the streets of Huntsville when our first satellite orbited the Earth. They were dancing again when the first Americans landed on the Moon. I’d like to ask you, don’t hang up your dancing slippers.

Two other recent partnerships have proved just as fruitful. The first, U.S. Cyber Camp, was launched last summer by the USSRC, UAH, and Cyber Huntsville to address a predicted workforce shortage of skilled labor in the field of cybersecurity. The inaugural weeklong sessions, which were hosted by the USSRC, featured cyber-related activities, demonstrations of cyberattacks, and simulations of defensive cybersecurity strategies. "This time we started with high school students, since the topic is complex and the program elements that UAH had developed were more appropriate for that age level," says Dr. Barnhart. "But we hope to move backward to younger and younger ages in the future."

The second, American Girl® 2018 Girl of the Year Luciana Vega™, was the result of a collaboration between the USSRC, NASA, and American Girl. As a Space Camp trainee with "a head for science and her heart set on exploring Mars," Luciana’s story invites girls to engage in informal STEM opportunities, whether it’s exploring her Mars habitat or taking part in her first space mission. "We formulate who we are as children in our play, and it makes our vision of who we are in the future," says Dr. Barnhart. "For them to see a Latina child who has a STEM future, it changes their lives." And much like Space Camp, she continues, Luciana has the power to "raise the expectations and aspirations of young children."

Given Dr. Barnhart’s advocacy for and work on behalf of the STEM fields, the fact that she majored in English as an undergraduate at UAH may seem paradoxical. But she is quick to dispel that notion. "I wanted to study the things I was interested in, and English taught me not to be fearful of learning and reading to get the background information on something in order to make a decision," she says. As a result, throughout her service as a captain in the Navy and later in her career as an executive in the private sector, she found herself "far better able to communicate" than many of her peers – something that holds true to this day. "Being an English major has never served me wrong in any area of endeavor," she says. "Whether it’s public speaking or writing a white paper or applying for a grant, I can’t name a day that goes by that my English degree isn’t an advantage for me." 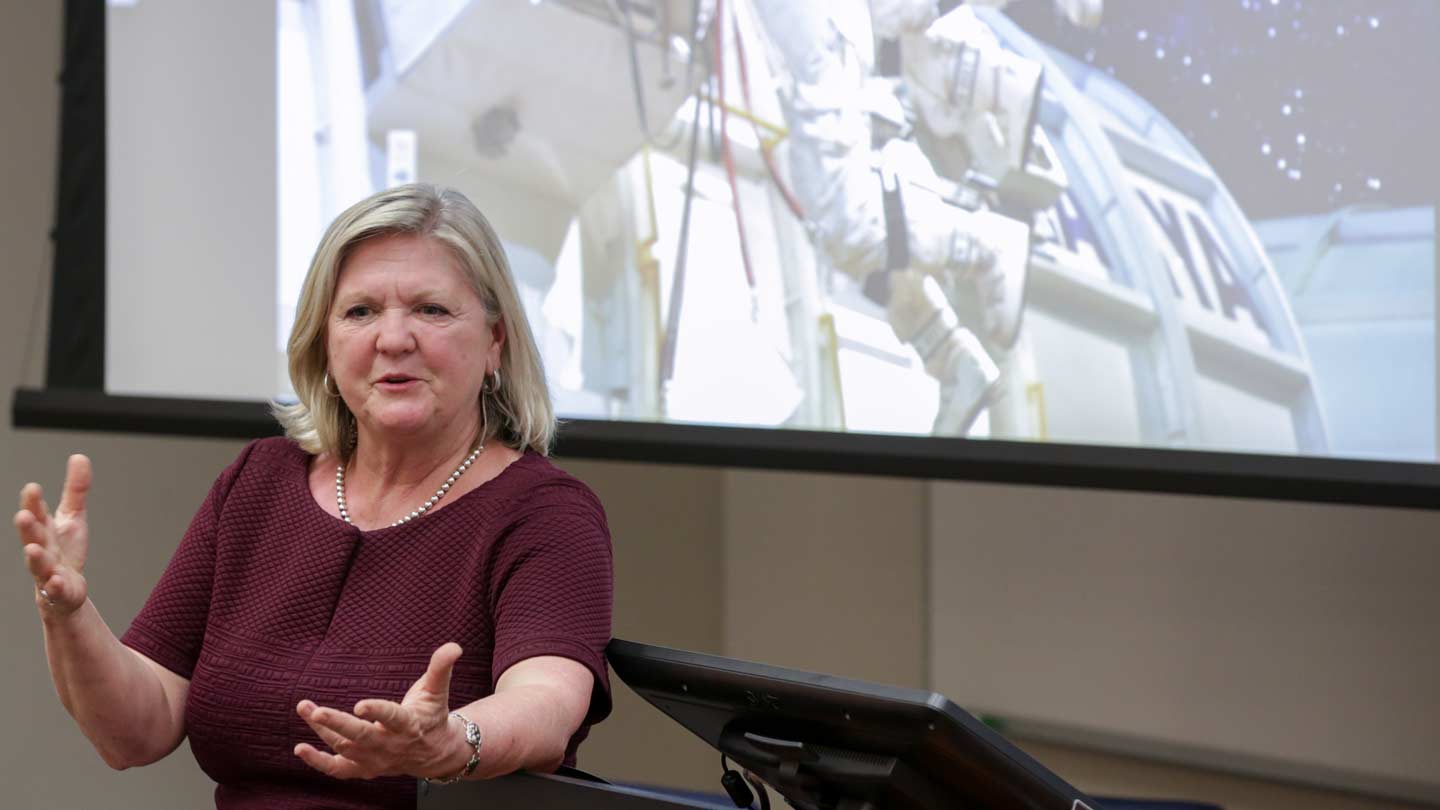 During Dr. Barnhart’s tenure as CEO, she has both expanded the USSRC’s educational reach and restored it to financial soundness.

Certainly the milestones she has achieved since being named CEO in 2010 are testament to that fact. Not only has Dr. Barnhart expanded the USSRC’s educational reach, but she’s also restored the state’s iconic attraction to financial soundness. "We’re now one of only one-half of one percent of museums in the whole country that are self-sustaining from operational income," she says.

And the future looks just as bright. The USSRC is set to serve as the hub for the city’s celebration of the 50th anniversary of Apollo 11’s lunar landing next year, complete with daily reenactments, a summer festival, and a potentially world-record-setting rocket launch. "We’re so excited," says Dr. Barnhart, who was appointed community leader for the celebration by Huntsville’s mayor, Tommy Battle. "We’re also working with the city to re-enact Dr. von Braun being carried around the square, when he told us not to hang up our dancing slippers."

Fortunately, she has no intention of doing so herself – at least not anytime soon. "Every day of my life, no matter where I am, someone comes up to me and talks to me about Space Camp and what a difference it made," she says. "Who gets that kind of reward? When you’re working with a mission that has such importance, I just can’t conceive of not doing this."