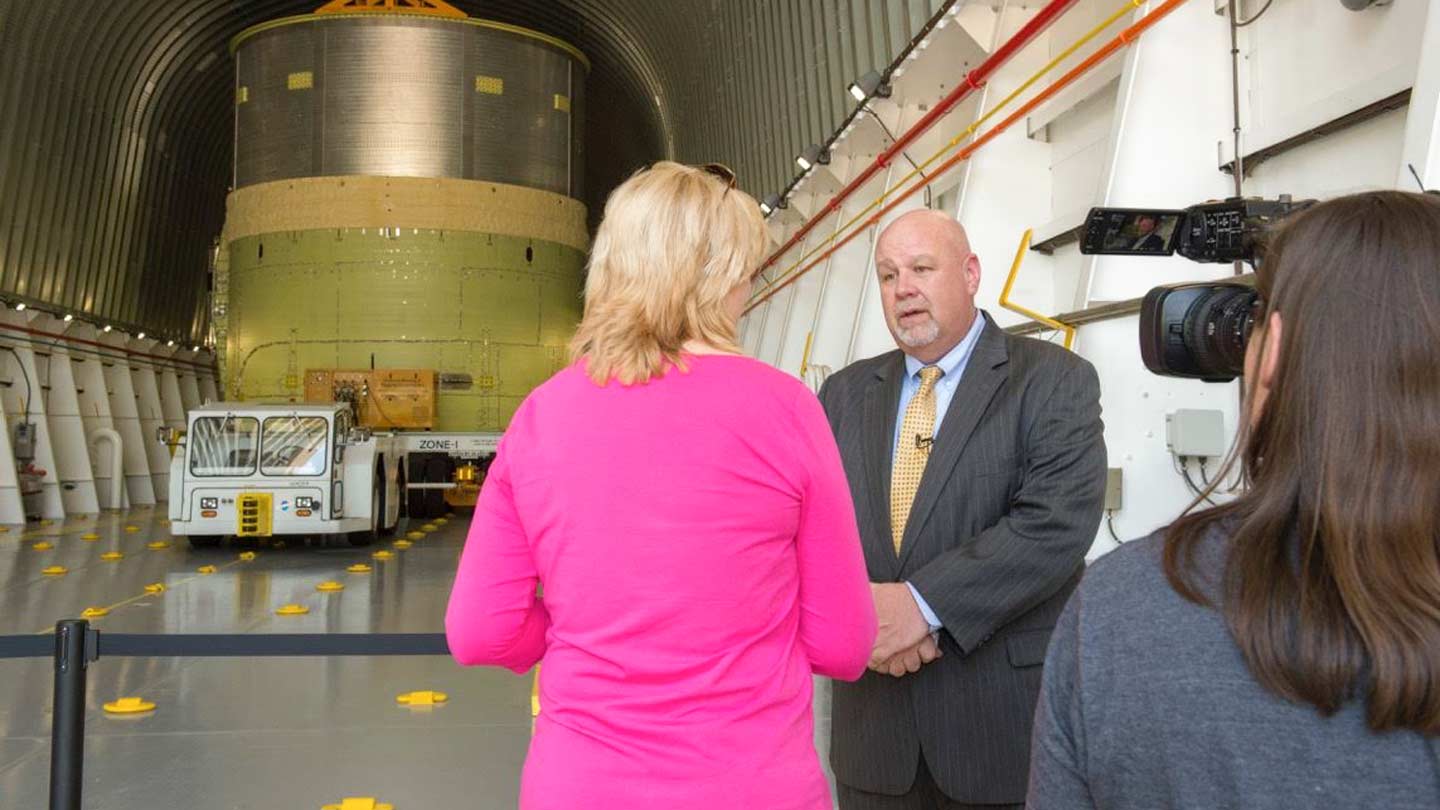 An engineering family, an inclination to tinker with cars, and simply growing up in "Rocket City" led John Honeycutt from the University of Alabama in Huntsville (UAH) campus to the top job leading the development of NASA’s new rocket to deep space.

Honeycutt, (‘90, Mechanical Engineering, BS), is one of four Alumni of Achievement being honored by the UAH Alumni Association on Tuesday, Aug. 1, from 5:30 p.m. to 7:30 p.m. in Room 112 of the Student Services Building. Attendees may RSVP thru surveymonkey.com. Questions may be emailed to alumni@uah.edu.

Since October 2015, Honeycutt has been the program manager of NASA’s Space Launch System (SLS) Program. SLS will be the most powerful rocket ever built, capable of carrying human explorers and robotic spacecraft on ambitious new missions to the moon, Mars and the outer planets.

He leads a nationwide workforce of more than 4,200 civil servants and contractors with an annual budget of $2.15 billion to design, build, test and fly NASA’s newest launch vehicle.

"I’m in charge of all facets of the program – planning, procurement, development, testing, evaluation, production and operation of SLS," Honeycutt says. "I couldn’t do that without an incredibly talented team. It’s a challenging job, but it’s also an exciting time to be part of what I believe will be NASA’s greatest adventures yet."

Honeycutt’s affinity for rockets comes naturally. A Huntsville native, when he was growing up, working on missiles and rockets for the Army or NASA wasn’t an unusual career choice. His father was a mechanical engineer and metals expert, who worked first for the Army in the 1960s and later for shuttle booster contractor USBI in the 1980s. At 86, his father still uses his metals expertise to support SLS manufacturing.

Until his senior year at UAH, Honeycutt attended college part time and worked several jobs managing a small grocery, working on cars and managing a gas station, and working in a hardware store. It was that part of his youth he credits for his people skills and at least some of his mechanical insight. It wasn’t long, though, until he became part of the space program.

After completing his senior year as a fulltime UAH student, he joined Rockwell International as a lead test engineer on the space shuttle propulsion program and later worked on Rockwell’s other propulsion development projects. Honeycutt would also work on qualification, proto-flight and acceptance testing hardware for the International Space Station for Boeing North American.

After joining NASA in 1999, he continued to serve in leading roles in propulsion design, systems integration, test planning and more. He was the NASA lead for the External Tank Working Group Interface Team during the space shuttle Columbia accident investigation and later led the external tank redesign effort, experience that would catapult him into jobs as deputy and then manager of the external tank project for the final shuttle missions. Most recently, he served as deputy manager of the SLS stages office, SLS deputy chief engineer, and SLS deputy program manager before being appointed to the top rocket job.

In his management role today, he’s seldom required to do any of the engineering he trained for, but the knowledge and the discipline instilled at UAH remains the foundation for his ability to probe into issues. In meetings, he’s the quietest one at the conference table – until he’s not. He listens until he finds the right question – or sometimes something more declarative – designed to extract issues hiding in NASA’s dense data charts and cut through knotty issues. He sees himself as an integrator, challenging his hardware teams to coordinate more closely as individual components start coming together.

"There’s nothing like managing the design, manufacturing and operation of space hardware to introduce even the smartest person to the concept of ‘life-long learning.’ So I’ve had the chance to continue the education that began at UAH."

Honeycutt credits UAH and its professors for the discipline and inquiring nature required for an engineering career.

"I have a lot of good memories of UAH. Professors like Donald Wallace and John Gilbert really stood out," he says. "I looked for opportunities to take classes with them. At the time, I was young and perhaps not as focused as I could have been. They knew how to reach me."

He’s received numerous awards for his work, including a NASA Exceptional Achievement Medal in 2011. In 2004, he received a Space Flight Awareness Award and a Center Director’s Commendation in 2000. In 1999, the NASA astronaut corps presented him with their Silver Snoopy Awards for his contributions to the success of human spaceflight missions. In July 2017, he received NASA’s Exceptional Service Medal for his leadership critical to the success of both the Space Shuttle and Space Launch System programs. But that’s all history.

"My No. 1 goal now is to fly our first mission successfully and then fly the second mission as soon as possible," he says. "My long range goal is for everybody working on this program to look back and say it’s the best thing they’ve ever done."

Honeycutt is married to the former Terri Johnson, also originally from Huntsville. They have one son and live in Huntsville.