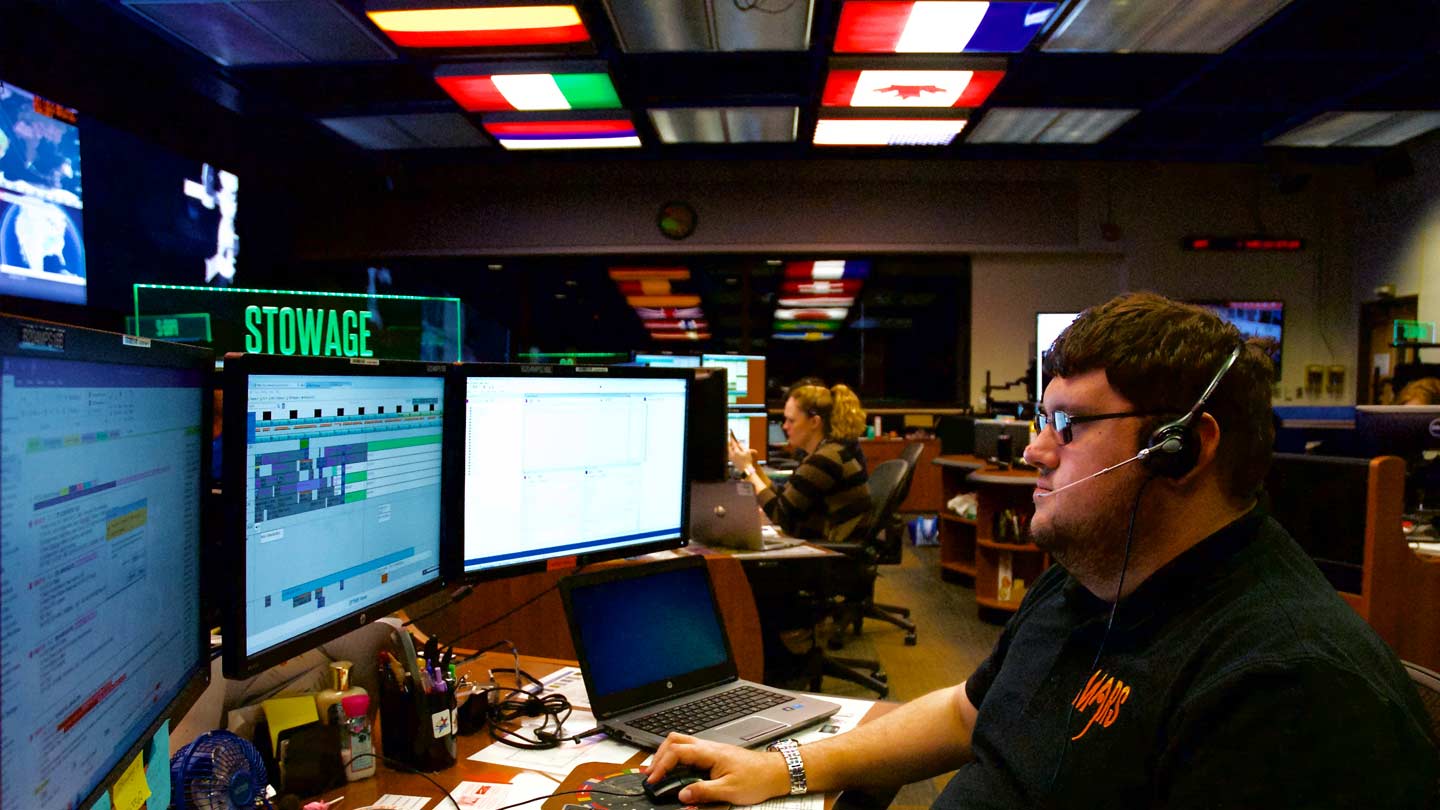 When Blake Parker came to The University of Alabama in Huntsville (UAH) as an undergraduate, he had one dream career goal in mind: working with NASA.

Now he’s part of a group that communicates regularly with the International Space Station.

“Growing up, I had idolized the Apollo-era flight controllers, and I was ecstatic that I was going to be one myself,” Parker says. “It’s a great feeling knowing that what you do is both enabling deep space exploration and improving life on Earth. Also, I enjoy working every day with highly intelligent and motivated people, many of whom who are former UAH classmates.”

He’s currently a stowage engineer, responsible for tracking the locations of all hardware related to U.S. science experiments aboard the International Space Station (ISS).

“Before anyone can sit console, there’s a six-month to one year certification that involves a combination of real-time on the job training, simulated ops, classes and self studies,” Parker says.

“I think the greatest hurdles that I had to overcome were related to my communication skills; I can be extremely introverted, especially under stress. There were plenty of times I was sure I was going to wash out, but I kept going.”

“Coincidentally, it was the same day that ‘The Martian’ came out in theaters, which I of course went out to see to celebrate.”

Parker says one of the coolest parts of his job is getting to work in the Payloads Operation and Integration Center (POIC), which is the science mission control center at NASA’s Marshall Spaceflight Center.

“While the control center itself operates 24/7/365, my console staffs 24 hours on weekdays. The first two shifts are concerned with executing the crew day and answering any stowage-related crew questions,” Parker says. “Since the ISS is on Greenwich Mean time, that period lasts from typically 1 a.m. to 3 p.m. Huntsville time. The third shift of the day focuses on tracking any late changes and making sure that the stowage notes for the next day are ready to go.”

Stowage notes are the laundry lists that tell the astronauts the beginning and end states of the items that they will be using for their experiments, Parker explains. Throughout of the day, the stowage member on console will be making updates to the Inventory Management System database based on what actually happened during the day. When not on console, stowage team members have other tasks and specialties back in the office.

“I am currently finishing up a three-month rotation as the Expedition 54 increment lead that started back in December,” he says. “Basically, I act as a member of a team that reviews and analyzes upcoming operations from a ‘big picture’ standpoint prior to them getting to the real time teams. I also act as a point of contact for coordination between my discipline and the various payload developers and other flight control teams around the world.”

Prior to being increment lead, Parker was stowage note lead for Expedition 51, leading the stowage note development team and finalizing stowage notes prior to them getting to console operators. He also worked as trash lead from July 2015 to December 2017.

“When something is trashed on the ISS, there is always paperwork involved,” he says. “It was my job to make sure that the necessary documentation was in order whenever an experiment generated trash and when those items were getting ready to be burned up on a returning Orbital ATK Cygnus, Japanese HTV, or on a rare occasion, a Russian Progress.”

From time to time, he serves as a simulation surrogate, “which is always fun because I get to play members of other flight control teams and see what kind of anomalies I can come up with to throw at the simulated POIC team.”

While at UAH, Parker worked at the university’s Systems Management and Production (SMAP) Center.

“It played a huge role in where I am now, especially with regard to my stint with the Army’s Space and Missile Defense Command (SMDC),” he says. “While in school, I gained a theoretical knowledge of spaceflight, and at SMDC it all became real. Working with the Army’s small satellite program, I did everything from orbital modeling to ground station operations to actually handling real spacecraft in a clean room environment.”

Prior to working with SMDC, Parker spent a semester as a PASS instructor for the Introduction to Astronomy class, which was then taught by Dr. Jack Fix. “Through it, I learned I actually enjoy teaching.”

He was a member of the Space Hardware Club, working primarily with launch and landing and the design and construction of several payloads for the BalloonSat program. He also worked with ChargerSat-1, the cubesat UAH launched in 2013. He was a member of the Astronomy Club and the 2012 College of Science Moon Buggy team, and played trombone in the Pep Band.

Parker says Edwin Guthrie, UAH assistant to the provost for special projects, played a large role in shaping his career.

“He was originally responsible for the first tour I took of the UAH campus, and later helped get my foot in the door at both the SMAP Center and Teledyne Brown.”

Parker is aiming for a future that involves human deep space exploration, working with either NASA or one of the commercial companies out there.

“It’s been far too long since people have walked on the moon, and I would really like to see boot prints on Mars in my lifetime,” he says. “Frankly, I want to contribute to making that a reality.”