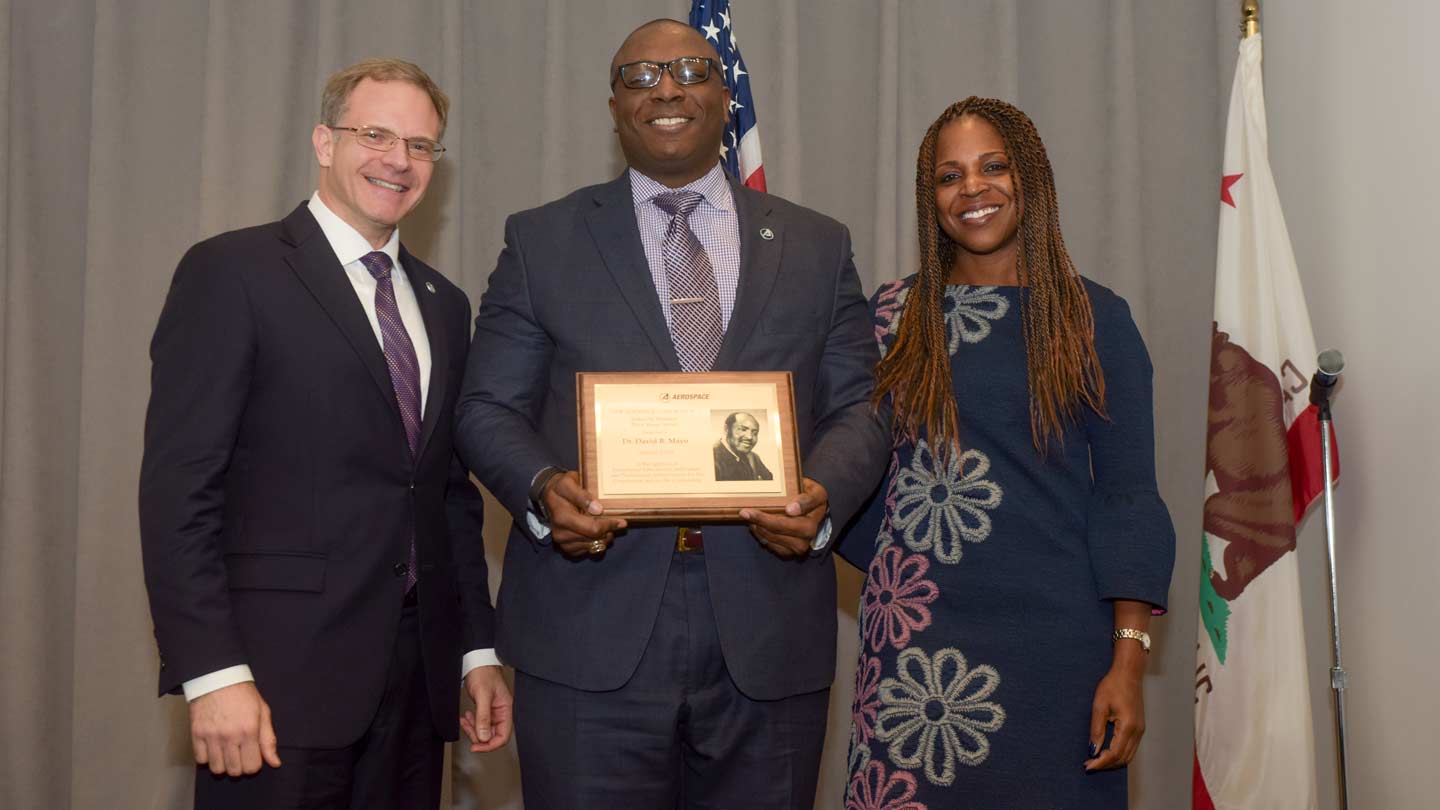 Dr. David B. Mayo, center, is the recipient of the 2018 Robert H. Herndon Black Image Award.

Aerospace is a California nonprofit corporation that operates a federally funded research and development center headquartered in El Segundo, Calif.

Established in 1982 to recognize the contributions and legacy of former Aerospace engineer and manager Robert H. Herndon, the award is made to a recipient selected based on criteria that includes career and professional achievements, leadership and initiative, and company and community volunteer activities.

Dr. Mayo is a Marine combat veteran of two tours in Iraq and one of six siblings, four of whom have doctorate degrees. In 2017, Dr. Mayo was awarded the NASA Earth Science Technology Office (ESTO) alumni trophy and NASA pin for his program management and integration support in an embedded role to that office during a critical transition period.

He was nominated for the Herndon award by colleagues and managers, and was selected to receive the honor by the Herndon Award judging committee.

"In preparation for this event, I reflected with those closest to me on some of the challenges that were overcome and the key reasons I can stand here today," he said when accepting the award. "The key themes that emerged were perseverance, teamwork and giving back. I am here today because of the perseverance installed in me by my parents and the support of friends, mentors and sponsors."

Prior to his current post, Dr. Mayo served as embedded support to the NASA Earth Science and Technology Office, where he provided program management and integration support as a member of the Commercial Systems Group’s Technical Assessments & Studies Team. He spent a year and a half as a technical staff member in the Systems Trades Analysis & Research Section (Space Architecture Dept.).

His time at UAH helped to mold him into the engineer he is today, he said.

"UAH was just what I needed after my time in transition from the military. This was also where I would met my wife, Dr. Talitha Hampton-Mayo, who finished her Master of Science in Engineering in Chemical Engineering there. We have fond memories of participating in the Louis Stokes Alliance for Minority Participation and Minority Graduate Student Association programs which provided science, technology, engineering and mathematics (STEM) support and paired graduate students with undergraduates for mentorship and research," Dr. Mayo said.

"Also, though both have passed away, two influential mentors from my time at UAH were Dr. Clark Hawk, founding director of the Propulsion Research Center, and Dr. Mark Bower, former Mechanical & Aerospace department chair, who personally made me feel welcome at UAH."

Dr. Mayo was recently named as one of the 2018 BEYA Modern Day Technology Leaders, an award bestowed by a STEM global competitive conference.