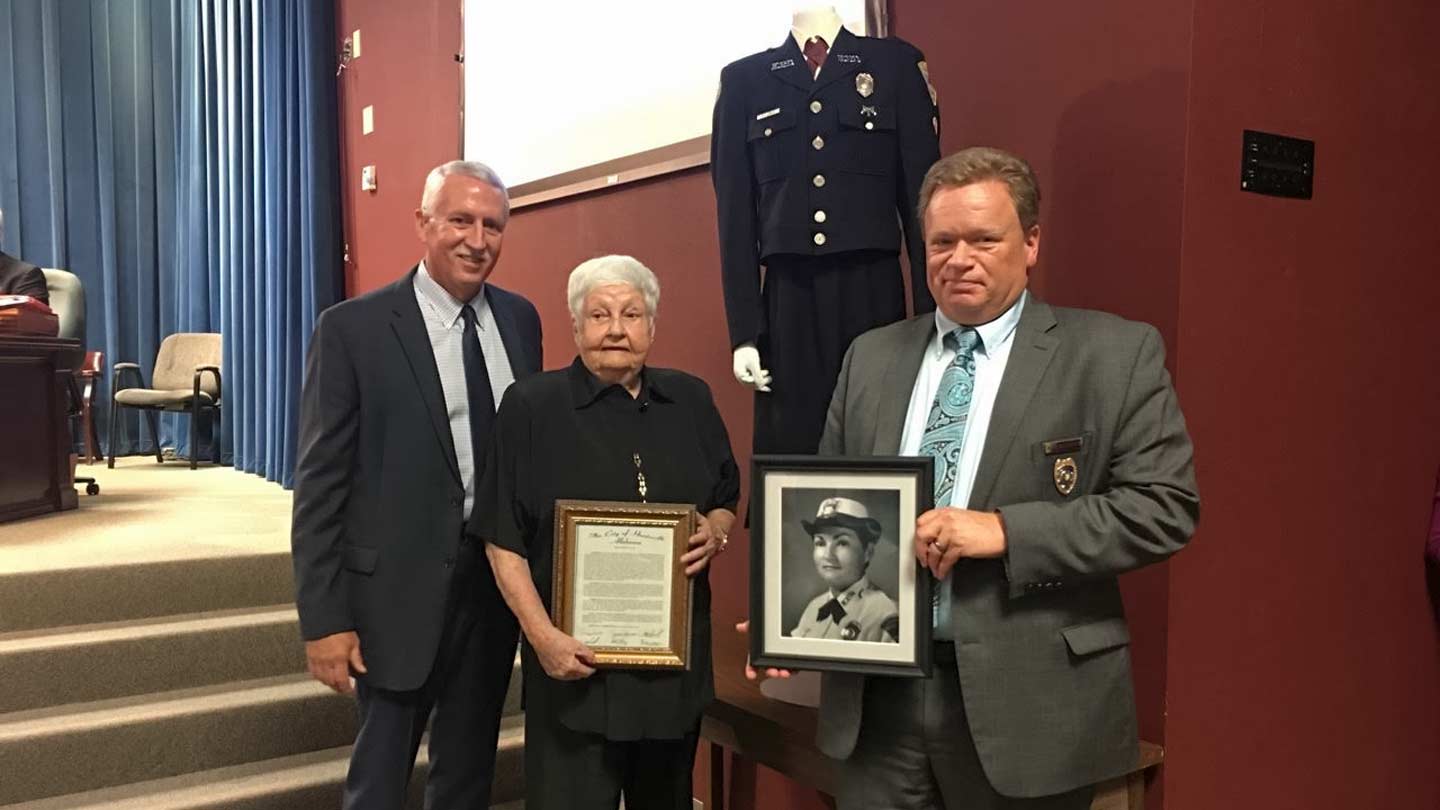 Mary Gail Tumlin with her proclamation in Huntsville City Council chambers shortly after it was presented.

The Huntsville City Council recently honored a University of Alabama in Huntsville (UAH) alumna who was the first female member of the Huntsville Police Dept. (HPD) with a proclamation and the retirement of her uniform.

Mary Gail Tumlin, who achieved her bachelor’s degree in history in 1978 and her master’s in history in 1983 after attending UAH for over 20 years while also working, says getting the honor at a City Council meeting was a surprise.

Perseverance and a strong desire to achieve were crucial to Tumlin achieving two degrees.

"I’d always wanted an education," she says. "I grew up on a farm and we didn’t have any money. I couldn’t pay for school so I knew I would have to work my way through. I was a member of HPD and I was going to school at UAH, too."

While working on her bachelor’s degree, Tumlin became friends with one of her professors, historian Dr. Frances Roberts, an early leader at UAH after whom Roberts Hall is named, and the friendship continued until Dr. Roberts’ death.

"There probably wouldn’t have been a UAH as it is without her," says Tumlin. "She was a legend. She worked with city officials and with university officials. She was right in the mix of getting UAH started. When I was working on my bachelor’s degree, we became friends. Everybody respected her."

After graduation, she taught criminal justice courses at UAH from 1984-1988.

She joined the police department in 1963 and she retired in 1989 with 26 years and three months of service.

Breaking the barrier as HPD’s first female officer "was new ground," she says.

"It was interesting, but I really didn’t have any real big problems," says Tumlin. "I knew that it was my attitude that was going to be the main thing. I expected the male officers to be leery of me. But I knew if I could prove myself, everything was going to be all right."

"I met Mary Gail Tumlin in 1964 and we immediately established a lasting friendship that has endured 53 years and continues," says Caylor. "She is a wonderful mentor and role model for me. Mary Gail exemplifies the values and individuality all purposeful young women can look to for a guideline, combining a worthy career with the pursuit of an advanced education. Mary Gail lives a life of honor, dedication to justice and focus that is truly inspirational."