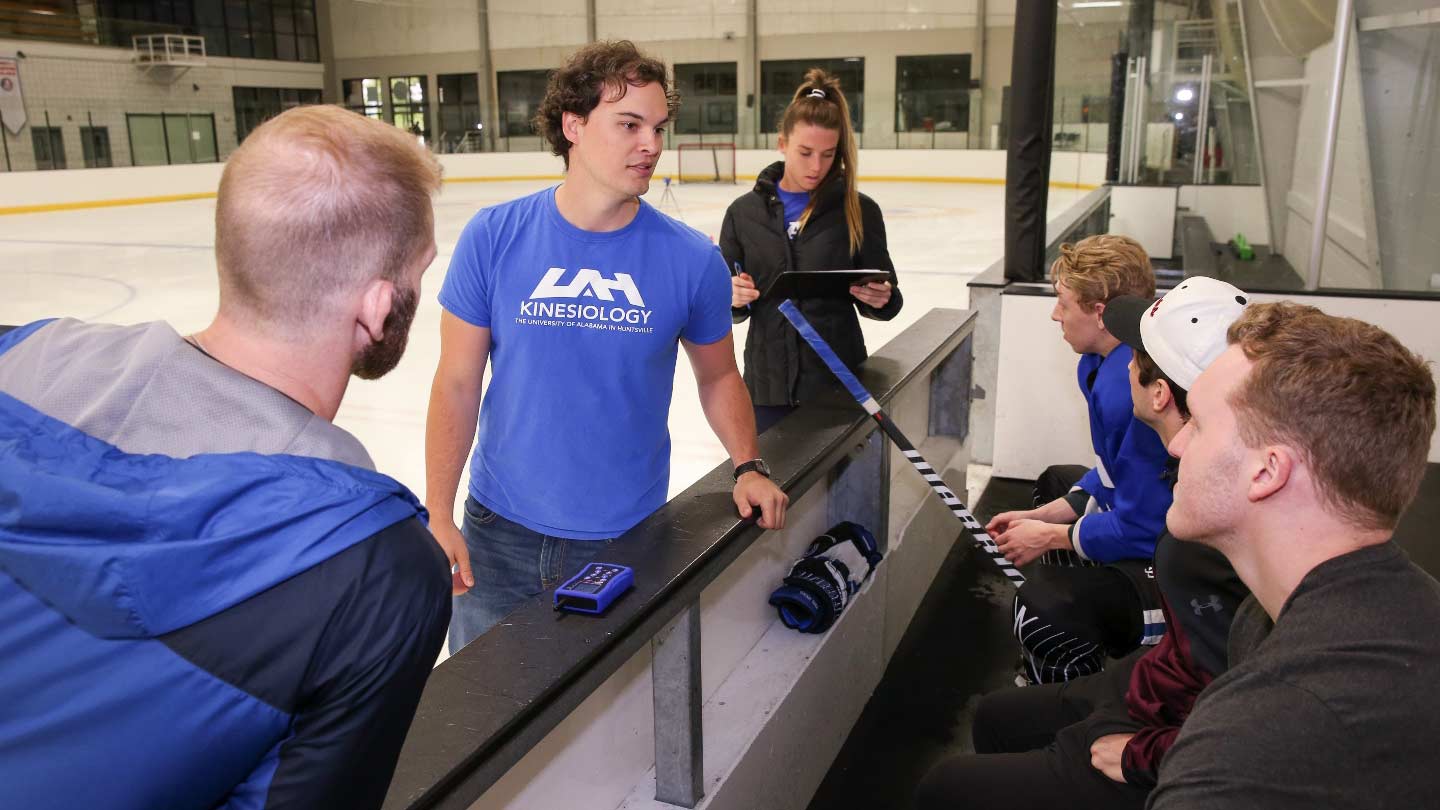 UAH alumnus Fitzgerald Dodds (center) dedicated himself to both academics and experimental research as an undergraduate student. He was recently accepted at The University of Southern Mississippi (USM) Graduate Exercise Science Program.

Fitzgerald Dodds was in restart mode in fall 2017. It was his first full semester back at The University of Alabama in Huntsville (UAH). Dodds was determined to correct the mistakes he made before and "put everything" into earning his degree.

Dodds’ first attempt as a UAH student stalled because of financial problems and other personal matters, resulting in a "lackluster" academic performance.

"I considered changing majors and even dropping out of school altogether. I eventually decided that I needed a break from school to save money and prioritize my life," said Dodds (’19, BS, Kinesiology).

"After my time away from the university I felt nervous about returning to campus…I felt like I had let my professors down and wasted their time," he said. "I quickly realized that the Kinesiology staff had not given up on me and had all the faith in me to succeed when I had no faith in myself. That’s when I realized Kinesiology was the major and career for me."

Kinesiology was always Dodds’ first choice as an academic major. The Lancaster, OH, native knew he didn’t have time to waste. So, he began the fall 2018 semester strong, enrolling in a 17-hour course load, and working on exercise science research projects.

Dodds assisted Dr. Ryan Conners and Dr. Paul Whitehead, professors of Exercise Science in the Kinesiology department with a research project maximizing player performance with the UAH Hockey team. In addition, Dodds sought permission to begin his own research study with the UAH Charger baseball team.

Due to a conflict with teaching schedules the next semester, Whitehead and Conners placed Dodds in charge of all the data collection for the latter half of the hockey study. "It quickly turned into a lot of early mornings at the Huntsville Von Braun Center to catch the team before they got on the ice to practice."

Dodds’ research team worked with the UAH baseball team exploring the idea of shoulder strength and range of motion (flexibility).

"We took this idea and applied it by separating the team into position players and pitchers and looked to see if there were differences between the two groups," Dodds said. "We hypothesized that the pitchers would have higher strength and flexibility values since they see most of the throwing volume throughout a season, but what we found was just the opposite and the two groups ended up being pretty even in both strength and flexibility. Group findings from the baseball study have opened the door for more research," he added.

Academic research for some college students might be discouraging, but for Dodds, it was one of the main reasons he sought a degree in a field that required experimental research.

Recently accepted at The University of Southern Mississippi (USM) Graduate Exercise Science Program, Dodds also earned a graduate assistant position while at USM to work on concussion research this fall with Dr. Scott Piland. The U.S. Department of Defense (DOD) funds the USM project. Dodds will also continue to help Conners and Whitehead with ice hockey research at UAH.

"The Kinesiology program at UAH was not easy by any stretch of the imagination, and it really prepared me for what I will be doing at USM," Dodds said. "While the program was difficult I truly believe the required research classes and last project truly prepare you for life after UAH — whether for graduate school or a professional career.

"I would never have made it through the Kinesiology program, or be in the academic position I am in today without the support of Liz Reading, Dr. Whitehead, Dr. Conners, and Dr. Jeremy Elliott," Dodds said. "I firmly believe this is the best exercise science department in the state because the instructors and advisors have a vested interest in your success if you are willing to put in the time and effort."

Dodds advice for high school and freshman university students entering the UAH Kinesiology program is to come ready to work hard and ask for help when things get tough. "Lean on the department staff because they are extremely knowledgeable and genuinely care about your success in whatever you chose to do with your degree."