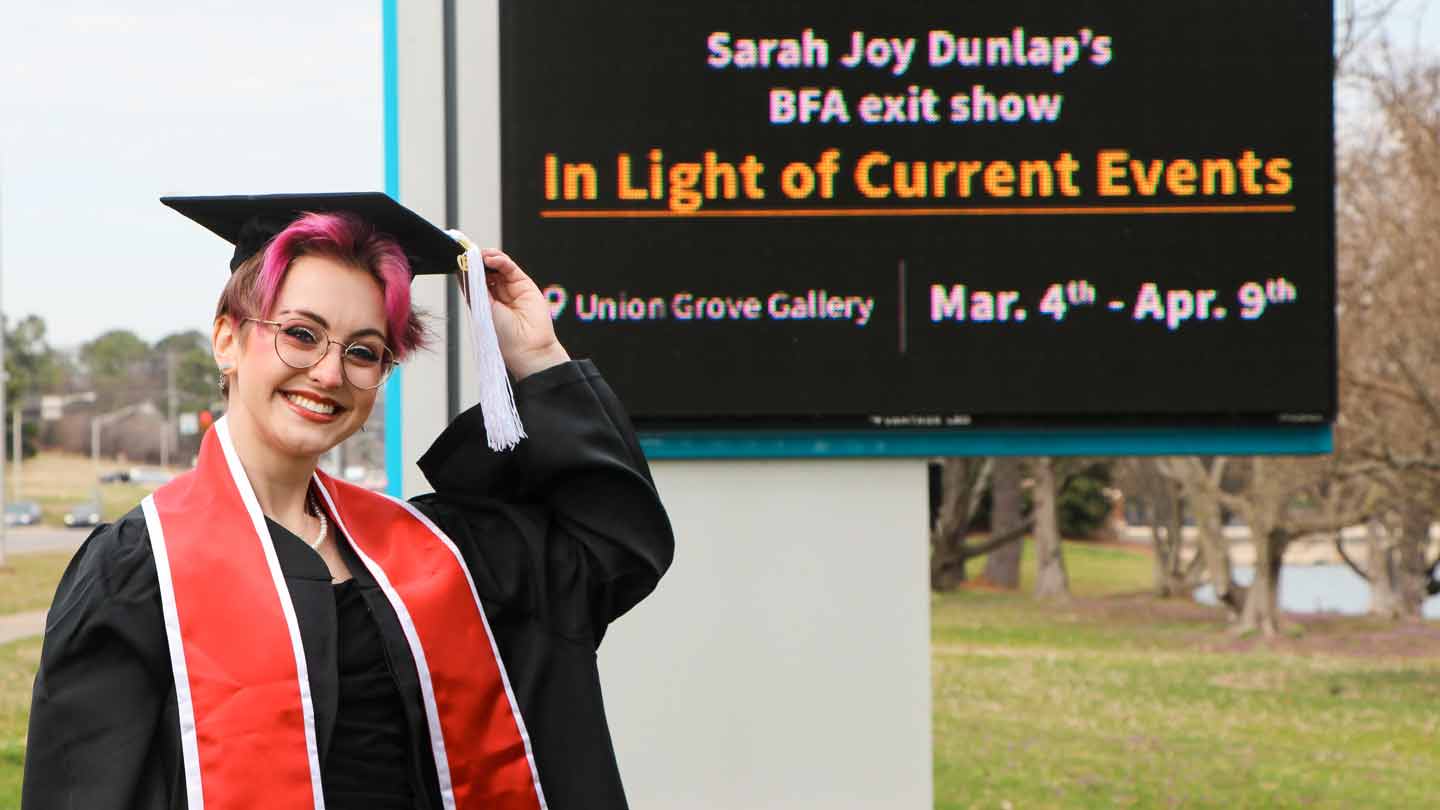 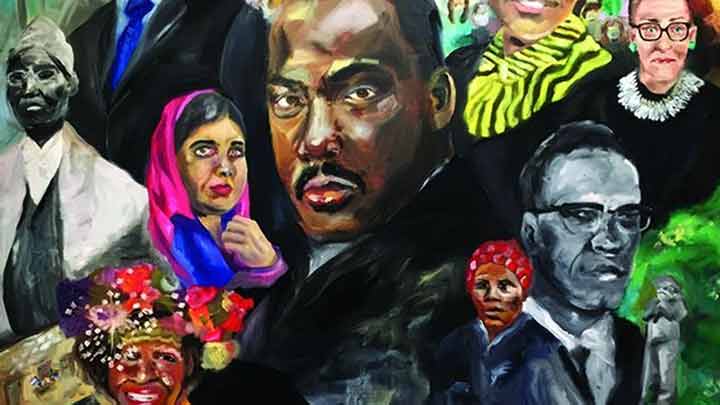 Her passion found its genesis in the death of George Floyd in Minneapolis last May 25, resulting in an exhibition based on the artist’s experiences during the period of protests and civil unrest that followed. These experiences ultimately led Dunlap to produce a work commemorating MLK Day at UAH to honor Dr. Martin Luther King, Jr. and other civil rights activists.

“Over the past year, I became involved with advocating and protesting for equality,” Dunlap explains. “I began photographing at various actions to document the movement. I’ve been able to use various art forms to contribute to the local cause, which has been an incredible experience and one that has profoundly shaped my artistic journey.”

For example, last summer the UAH student worked as a graphic designer for Maurice Shingleton Jr.’s mayoral campaign, the first Black or minority candidate to be on the ballot for mayor in Huntsville. For the campaign launch she organized a show called “Rise Above,” and later became one of the organizers of the Activist Art Show at Lowe Mill in August 2020.

“That show led to me working with two other fantastic women to organize the Activist Art Show at Lowe Mill,” the artist says. “Any activism-based work that I make, I give permission for the image to be used anywhere that people would like, and that has led to my work being made into things like posters and stickers, which was incredible to see! Then I was approached by the UAH Office of Diversity, Equity & Inclusion to create a piece of work for the MLK commemoration program, since members of ODEI leadership were aware of the work I’d been doing. After the piece, ‘Injustice Anywhere...’ was completed for the school, I was able to use it in my solo art show, ‘In Light of Current Events.’”

“The ability to take a passion of advocating for anti-racism and the oppressed and channeling it, not only through her artwork, but as a way of life, is truly inspiring,” says Karessa Acosta Lee, ODEI Coordinator for Inclusive Programs and Student Leadership. “I thought it would be a great opportunity to really shine a spotlight on her as a recent UAH alum, talented artist and activist. I really felt that Sarah Joy was the epitome of what her generation (and even others outside her generation) should strive to do. I was completely blown away when she sent me the final artwork!”

Dunlap’s favorite medium for rendering her visions is oil, though it took some time and experimentation in her coursework to come to that realization.

“I wasn’t exposed to oil paint before college and was reluctant to dive into it initially,” she says. “Once it finally clicked for me though, I fell in love with the medium. I enjoy incorporating mixed media and collage elements into my pieces, and have a soft spot for sculpture as well. I really love any form of art that I have the opportunity to work with, and think it’s valuable to try as many things as I can!”

Dunlap has found a fascination in visual art since childhood and credits her family with encouraging her passion.

“I’ve been interested in art since I was very young, and, thankfully, had parents that were supportive of my childhood creativity. I began selling my work in high school, but it wasn’t until college that I really began to grow and realized that this was what my career and life would be.”

Asked what it has been like as an artist to be working during a pandemic year, Dunlap points to the lack of real-life contact with her peers as one factor that had an impact.

“The pandemic did make it a bit more difficult. I especially missed the environment of being able to work around other artists. Feedback from peers and professors is important, and it’s more difficult to receive that when working in isolation. I’m grateful that I already had the majority of my degree under my belt when the pandemic hit, so I was able to continue to apply all I’d learned, even as I worked at home.”

As to how she chose to represent such an iconic figure in Dr. King as a visual subject, the artist turns reflective.

“I think my choices in composition came from my more recent interest in collage work and striving to incorporate a more maximalist aesthetic without overwhelming the painting,” she notes. “For a handful of my more recent projects, including a few in my show, I would find dozens of reference photos, then make a rough collage of those photos on my computer. From there, I’d start sketching and readjusting to find what I felt was a pleasing composition. For this MLK piece, I wanted to create a painting that encapsulated a number of things. Aside from depicting various heroes and fighters for justice, I have scenes showing the civil unrest and uprising of the past year from all across the country.”

These days the artist is focused on charting a pathway for her future endeavors, with a definite eye to expanding on her academic efforts at UAH.

“I am taking a gap year, then I plan to pursue my Master’s of Fine Arts!” Dunlap says. “My current aspiration is to eventually teach art on a collegiate level. This career plan was influenced by watching my art professors at UAH. I want to be able to have the overwhelmingly positive impact on my students someday that they’ve had on me. I honestly cannot praise UAH’s art department enough. My experience with art at UAH has been fantastic. Professors genuinely care about helping students become stronger artists. I was pushed to grow, and I’m grateful. I couldn’t have asked for a better learning environment for my undergrad.”