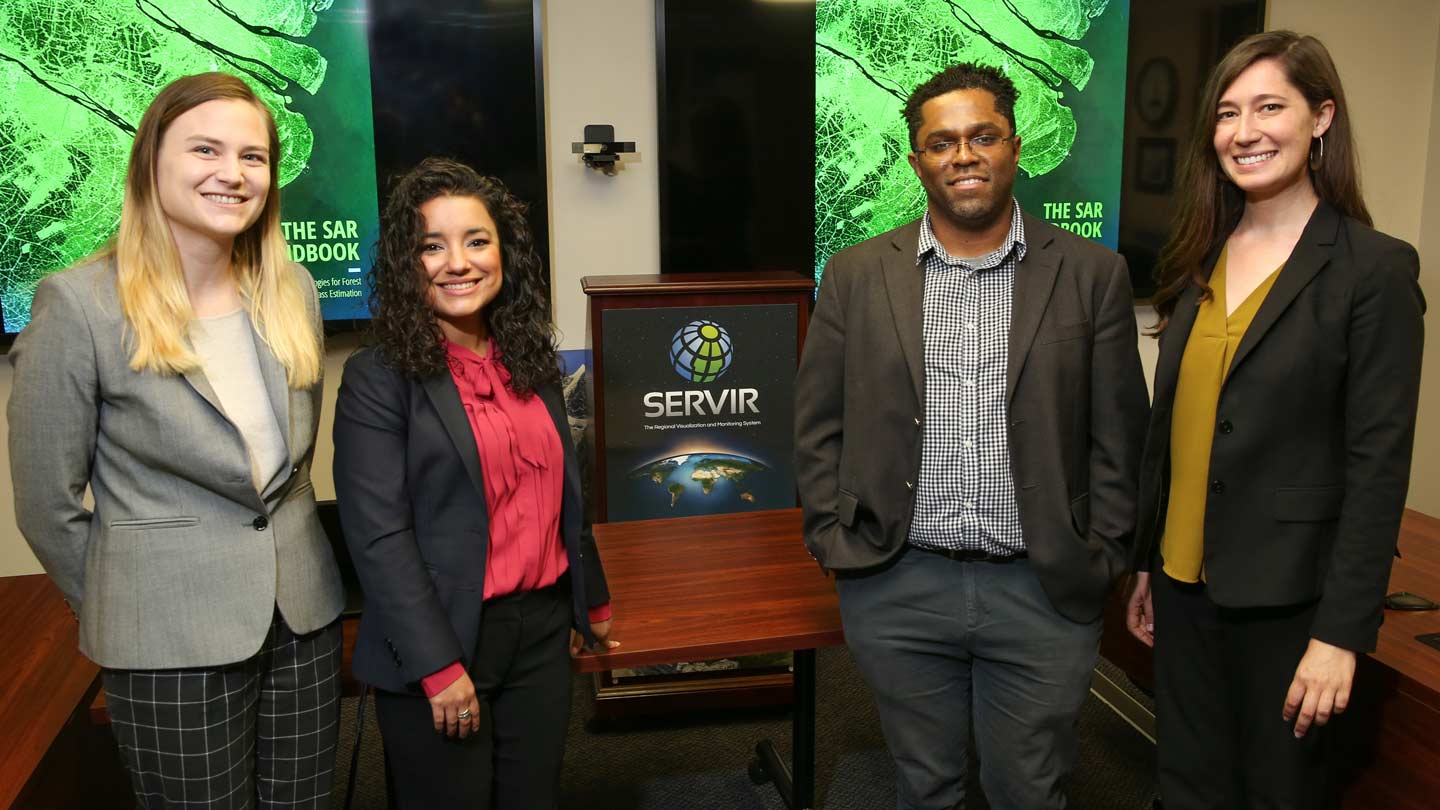 UAH scientists Africa Flores, Leah Kucera, Kelsey Herndon and Emil Cherrington are behind the production of the handbook, together with SERVIR colleague Rajesh Thapa. Their work complemented the work of the subject matter experts, who authored six of the chapters.

Subject experts included Franz Meyer of the University of Alaska-Fairbanks, Josef Kellndorfer of Earth Big Data, Paul Siqueira of the University of Massachusetts, Sassan Saatchi and Marc Simard of the NASA Jet Propulsion Laboratory (JPL), and Hans Anderson of the U.S. Forest Service.

A collection of state-of-the-art methods and theoretical background to facilitate the use of SAR data for forest monitoring and biomass estimation, the SAR handbook is freely available online as an e-book hosted on the SERVIR Global website. SERVIR, a joint venture of NASA and USAID, is an acronym standing for the Spanish word that means "to serve."

Flores is a NASA-SERVIR Amazonia science coordination lead, land cover and ecosystem theme lead, and ESSC research scientist. She led the handbook project from inception to execution to final delivery and is now involved in its next steps.

"I worked directly with USAID; the U.S. government’s SilvaCarbon program that works to enhance global monitoring and managing of forests; SAR experts; SERVIR Hub representatives; and SERVIR Science Coordination Office colleagues," Flores says. "I edited the book by lining up reviewers, tested and reviewed each individual chapter, and also authored the first chapter explaining the conception and rationale of the SAR Handbook and complementary materials."

In addition, Flores coordinated meetings and supported workshops associated with the handbook’s creation.

Kucera is a NASA SERVIR technical reporting and communications lead and an ESSC research scientist. She led the creation of the SAR Handbook layout, including the main graphic design, figure creation, formatting, and look and feel of all of the handbook’s deliverables. Kucera transformed heavy content into a readable layout and worked with Herndon and Flores to co-develop one-pagers that are part of the companion materials for the handbook.

She is interested in the intersection of Earth science and communications. She has worked on projects investigating soil development in inland sand dunes and on water quality and availability via remote sensing.

"I was in charge of the process of turning individual word documents and chapter content into a traditional book layout, and also worked on editing content and creating companion materials for the handbook project," Kucera says. "In addition, I worked closely with a UAH student intern, Melvin Poplar, to create short animated videos outlining basic SAR principles in a fun and engaging way."

Herndon is a NASA-SERVIR Amazonia regional science associate and ESSC research associate. She collaborated with Flores, Kucera, Cherrington and Rajesh Thapa at the International Centre for Integrated Mountain Development (ICIMOD) in the Himalayas to edit each chapter and the handbook as a whole, utilizing input from the entire SERVIR Global network.

Herndon researches using remote sensing to monitor ephemeral water bodies in the Tahoua Region of Niger, where she also explored the political, social and economic factors impacting management of these scarce resources.

"I tested and edited the training materials created by the subject matter experts, as well as generated and edited content for the one-pagers and animated videos," Herndon says. "I was also in charge of compiling all training tutorials, and ensuring the respective training materials were complete and worked on the SERVIR Global site that hosts the digital version of the SAR Handbook, trainings and supplemental materials."

Cherrington is a NASA-West Africa regional science coordination lead for the SERVIR Science Coordination Office and an ESSC research scientist. He collaborated with other colleagues in the editing process and led development of the final chapter, which examines potential future application of SAR across SERVIR’s global network of hubs. His research involves the mapping of forest types and land cover types in Central America and French Guiana, including the use of multispectral data and SAR data.

"While we can’t predict the future, we were able to anticipate how the centers of excellence – called hubs – that implement SERVIR in each of five respective regions will likely be using SAR," Cherrington says. "For instance, the Asian Disaster Preparedness Center (ADPC) and ICIMOD are considering integrating SAR into the Regional Land Cover Monitoring System (RLCMS) that they are jointly implementing, and which up to now has largely been using optical data."

As part of his role, he attended the in-region training on biomass estimation, hosted by ICIMOD in Nepal and led by Dr. Saatchi of NASA’s JPL.

"To strengthen UAH’s own capacity in use of SAR, all of us who attended the trainings which led to the development of the handbook also replicated the trainings at UAH, generally involving other personnel from the Earth System Science Center and NASA’s Marshall Space Flight Center Earth Sciences," Cherrington says.

The handbook translates very technical SAR training materials into a format more easily used by a general applied science audience in the forestry community, which is an emerging application of the technology. Intended global users include remote sensing specialists working in government agencies, academia and non-governmental organizations or research centers that need to account for the state of their countries’ forest resources.

"In addition to reporting, we expect that management agencies in various countries will be able to apply the skills gleaned from the handbook for operational monitoring of forests," Flores says.

"We expect the handbook will not only build capacity for remote sensing specialists to use existing freely available SAR datasets, but will also prepare them for using data from future satellite missions, such as NASA and ISRO’s upcoming NISAR mission," says Herndon.

"We worked hard to create a compelling, easily-understandable document that would be accessible to people not previously exposed to SAR, and enable more in the remote sensing community to add radar remote sensing to their skill sets," Kucera says.

An upcoming NASA-ISRO NISAR satellite mission in 2021 offers an opportunity to leverage openly available SAR data from across the globe for ecosystem monitoring that previously was not possible.

"Through the development of this handbook, we hope to prepare scientists and increase the total potential users for this valuable new dataset," Flores says.

The handbook is expected to fill the gap of applied knowledge of SAR to take advantage of freely available datasets for forestry applications such as mapping degradation and deforestation, estimating forest biomass, mapping mangroves and estimating forest stand height.

"Our team recognizes the value of strategic partnerships. Working on the NASA side of things, we all work to directly contribute to the Applied Sciences Program to understand and protect our home planet, and inspire and prepare the next generation of scientists to do the same," Flores says.

"The SAR Handbook initiative has been a valuable outgrowth of these goals, and we, as UAH research personnel, are extremely happy to be part of a vision that is bigger than our individual work. The support that we have had from the university –including the faculty, facilities and other resources – has been an invaluable part of that."