UAH Clinic Corner: What you need to know about the measles outbreak 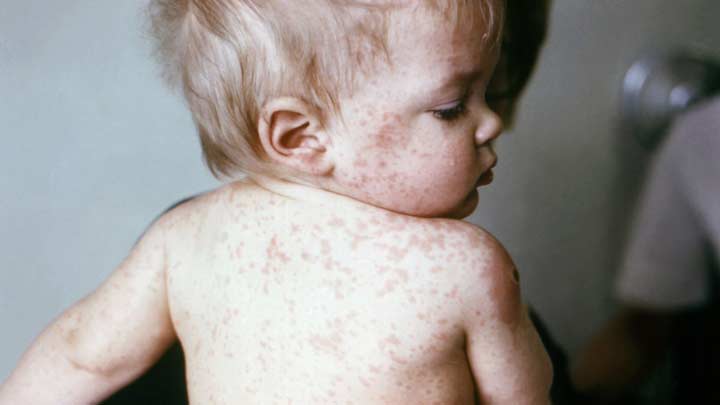 From January 1 to May 3, 2019, 764** individual cases of measles have been confirmed in 23 states. This is the greatest number of cases reported in the U.S. since 1994 and since measles was declared eliminated in 2000.

The United States officially eliminated measles nearly 20 years ago. But according to The Center’s for Disease Control and Prevention (CDC), less than six months into 2019, the number of confirmed cases of measles rose to nearly 800 this week.

On Thursday, The Alabama Department of Public Health (ADPH) confirmed one case of the disease in St. Clair County. In addition, ADPH is currently investigating multiple open reports on measles, according to news reports.

"The CDC recommends people vaccinated against measles in 1960 and 1968, have a blood titer drawn to assess immunity because some people received the MMR vaccine that did not have the live virus in it," said Connie Abbott, Nurse Practitioner, UAH Faculty/Staff Clinic (FSC). Titers identify the amount of antibodies in a person’s blood.

Measles is a respiratory disease that causes a skin rash, fever, cough, and runny nose—can be dangerous, especially for babies and young children, according to Contagion Live Newsletter. It is one of the most contagious diseases and can cause severe complications, including pneumonia, swelling of the brain and death. In fact, one to two children out of every 1,000 that contract measles die from complications of the disease and one in four people that get measles need to be hospitalized.

The MMR vaccine is safe and effective. According to the CDC two doses of MMR vaccine are about 97 percent effective against preventing measles; one dose is about 93 percent effective. Two shots should be given to highly vulnerable groups like college students, hospital workers, women of childbearing age, and people traveling internationally or on a cruise.

"If you had only one vaccine, then a titer to assess immunity is also recommended," Abbott said. "Many people are choosing to get blood drawn and be tested as a precaution. The UAH FSC is happy to draw these titers. The FSC does not carry the MMR vaccine, but if needed a prescription will be sent to the pharmacy of your choice and should be covered by insurance. Patients should double check with their insurance company."

Abbott said people born before 1956 are presumed to have immunity because most people have been exposed or previously contracted the disease. "Two vaccines were not recommended until 1967. And, one of two vaccines was administered at that time: a live vaccine or an inactivated vaccine. Most people don't know if they were given the live or inactive vaccine during that time. Those who received the inactivated vaccine frequently don't have as high of an antibody response and therefore may need that second dose."

Abbott said the reason for the re-emergence of the measles and its rapid spread is due to the decrease in measles vaccination practices. This decrease is due to several factors but two main ones are anti-vaccine groups promoting the belief that vaccines have caused autism, and younger generations having never experienced these diseases and the true impact they have on the population. "The measles is much more than just fever, rash and itching. Communicable diseases can be fatal and have killed thousands of people," she said. "Measles was considered eradicated in the U.S. in 2000. This has led to a drop in the number of people vaccinating their children because they don’t feel it is necessary and in turn, this has led to an increase in measles cases. The World Health Organization reported that in 2018, 110,000 people died of the measles."

Abbott highly recommends projects like community programs to educate the public regarding vaccination and Herd Immunity to help to eradicate preventable diseases. "Before the middle of the century when there weren’t any vaccines, thousands of people died from diseases that are now vaccine preventable such as whooping-cough, polio, and measles," she said. "The concept of "Herd Immunity" is very simple. The more people vaccinated, the less likely a disease is to spread. Most vaccine-preventable diseases spread from person to person. If one person in a community gets an infectious disease, he can spread it to others that are not immune. But a person that is immune to a disease because of vaccination can’t get that disease and can’t spread it to others."

The ADPH is also warning North Alabama residents that a Hepatitis A outbreak continues to grow and people should get vaccinated. For more information on preventing Hepatitis, please visit:uah.edu/news/campus/uah-nurses-give-tips-for-preventing-hepatitis-hepatitis-a.