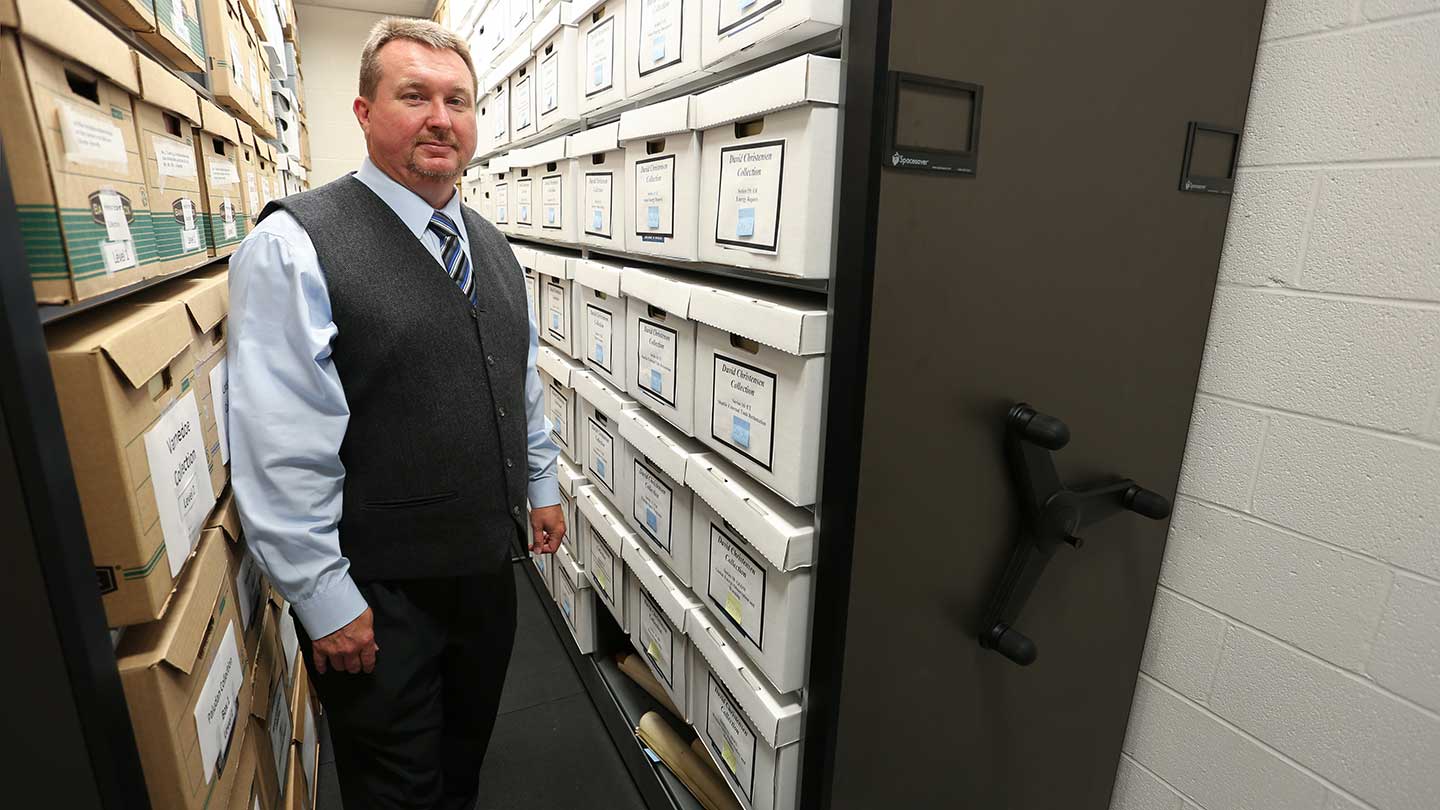 With the archived files is Reagan Grimsley, the head of special collections and archives, who says UAH’s goal is to be one of the pre-eminent institutions involved in space history research.

Maybe you’re inspired by the coming July 20 anniversary of the Apollo moon landing. Or maybe you want to build your own rocket ship, yet avoid beginner’s mistakes.

Whatever the inspiration, you can literally relive the development of technologies that made the Apollo moon landing and first walk on the moon possible at the M. Louis Salmon Library at The University of Alabama in Huntsville (UAH).

Extensive collections of NASA materials produced during the development of the Saturn V rocket and materials from the Apollo era space programs reside in the archives on the ground floor of the library and are available to the general public from 9 a.m. to 4 p.m. Monday through Friday.

“This documentation was actually going on during the Apollo launch process,” says Reagan Grimsley, the library’s head of special collections and archives. “It’s the technical documentation that allows us to know about the Saturn program.”

The 40 linear feet of archived materials range from the early 1960s to the early 1970s and provide a ringside seat to the development processes NASA underwent to build, test and transport the necessary machinery to put man on the moon. Included are personal papers, oral histories and diaries from many scientists who were instrumental in the race to space.

“The space program was not just about technological development. It was about people, and we’ve tried to represent that aspect well in our collection,” Grimsley says.

The library moved the archives to their current location in 2001, and an enclosed reading room was built where anyone who wants to peruse the collections can do so simply by asking.

“You can go back and look at the updates and see the Saturn V project as it moves along,” say Grimsley while leafing through a vintage NASA document in archive storage.

Want a quicker view? Many of the space program archives are digital and available online.

Working under a Shooting for the Moon grant, staff are digitizing the oral histories in the collection so that they can be made available online, a process that has involved restoring the sound from hundreds of hours of magnetic tape recordings.

People involved in the space program, their relatives and space aficionados are constantly adding more materials to the expanding archives, Grimsley says, which is something that makes him happy.

“We have a pretty good pipeline,” he says.

Gathering materials is one part detective work, one part donor enthusiasm and one part sheer luck, but the process serves some very specific goals.

“First of all, we want to document Alabama’s role in the space race, but our collection is international in scope,” Grimsley says. “Our overall goal is that we want to be one of the pre-eminent institutions involved in space history research.”

Apollo materials also include documentation of the development of the Lunar Rover, including the papers of the Saverio “Sonny” Morea, designer and project lead for the rover, who also was the NASA manager for the F-1 and J-2 engines.

“We have probably the most complete documentation of the Lunar Rover anywhere,” Grimsley said.

Copies of a publication called “Space Journal” that was produced in Huntsville for about two years beginning in 1957, with the direct involvement of Dr. Wernher von Braun, are being digitized.

“We worked with the Von Braun Astronomical Society to digitize as many copies of the ‘Space Journal’ as we could get a hold of, and put them in our collection,” Grimsley says.

Found in the NASA archives are major collections donated by:

The Saturn V and Apollo materials are part of a wider space-oriented collection that includes original film shot by Skylab during its 1973-1974 mission. Also part of the wider collection is an extensive cache of science fiction books, many of which could have been formative in the young minds of future space race leaders.

“We want to document space history,” Grimsley says, adding that the library is always interested in hearing from people who are interested in donating material that furthers that goal.