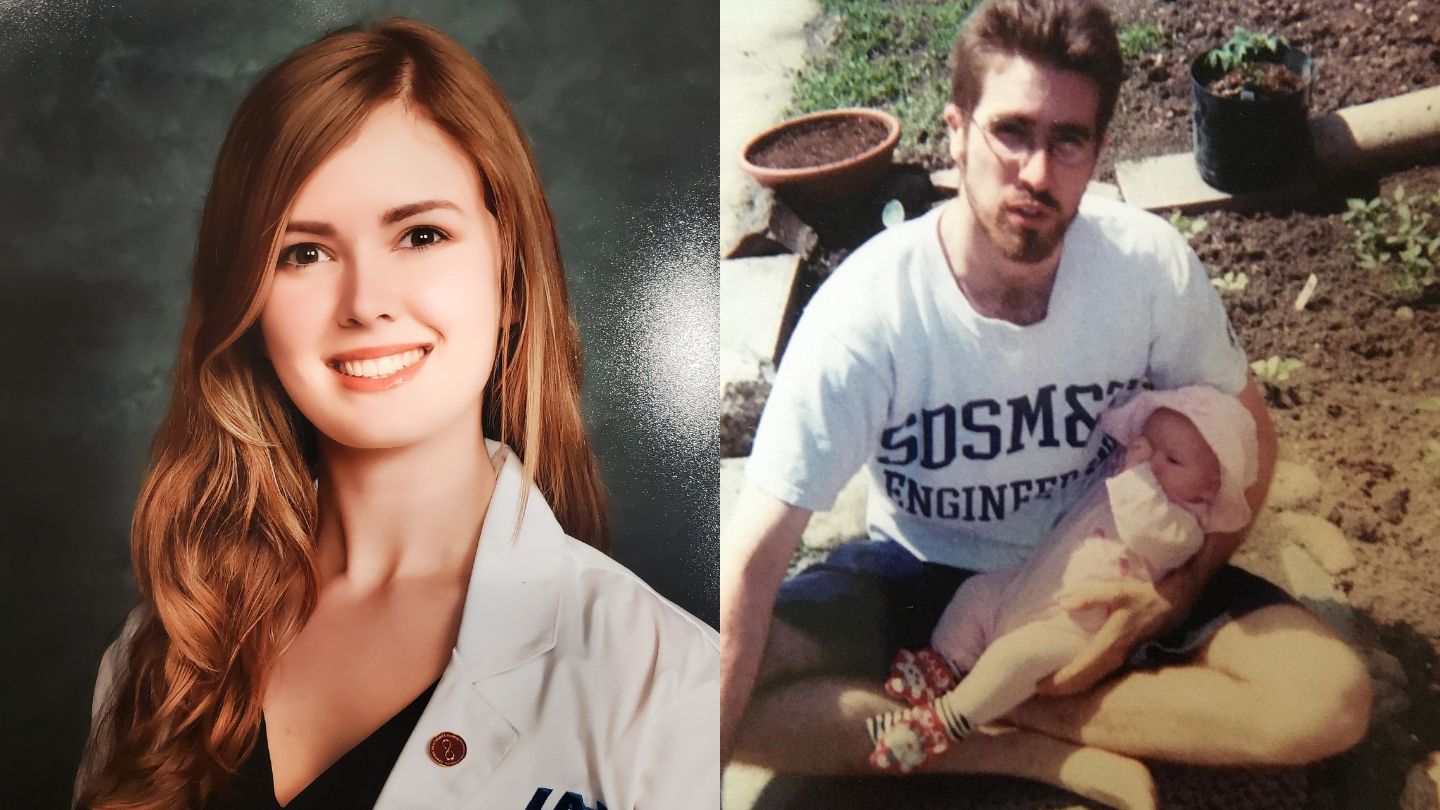 “I give all the credit to him!” she says. “He is my hero! He was a big part of getting me through school. My father didn’t start with much at all. We were pretty poor and lived in project housing in South Dakota in a very small community where he grew up. He is a very passionate musician and has played guitar since he as 13, but when he realized this wasn’t putting money on the table, he went back to school for an engineering degree. I have three younger siblings, and the entire time he was taking care of us, studying for his degree. He got his masters at UAH in cybersecurity too.”

The enduring example her father set has served his daughter well, as she has poured that inspiration and drive into her own academic career.

“Going to UAH and nursing school has become the biggest part of my life!” the graduate says. “Nursing school is really hard! But the professors at UAH are so personal, and they really work to help you and understand you. I definitely want to thank Dr. [Elizabeth] Barnby and Dr. [Rebecca] Davis. My favorite classes were med surge and critical care nursing and gerontology.”

What has become a central passion for the graduating senior began with great trepidation, she says.

“I wasn’t sure if I wanted to go to nursing school, especially during the pandemic, which really has exposed a lot of the challenges in our healthcare system,” she explains. “Our situation growing up had really made me really distrust the healthcare system. But at UAH, working with so many wonderful nurses, I really learned how much humanity there is in nursing! We had so many hardships when I was younger, that I had developed an air of distrust and cynicism. But the nurses here are the most genuine, caring people I have ever met, and they really helped me open up and be a kinder person myself.”

In the beginning, even attending college proved to be a bit daunting, Handel admits. “The CON feels like such a separate part of UAH, and the campus is really big! There were so many new things. But when you go to the College of Nursing, you quickly find your future best friends! All 60 of them! We all love each other so much.”

With her father cheering her on and all her newfound friendships and mentors, Handel threw herself into her studies and was rewarded with the award for Clinical Excellence from the College.

UAH has helped the graduate get a jumpstart on her future employment as well, as Handel is already working at Huntsville Hospital.

“I’ll be working on a cardiac stepdown unit,” she explains. “That’s where I’ve worked the past two years as a tech. They are so kind there! The nurses are like my big sisters. Every single one is such a good influence on me, and we have such good teamwork, like a family. They genuinely are like my real-life best friends. I’m invested in their lives, their children, their families, their mental health, which is such a big part of not getting burnt out with the current stresses in our healthcare system.”

Handel sees the mission before her as the best she could have envisioned. “Even though I’m graduating, I absolutely will be coming back for my graduate degree at UAH! I think nurses are the future of the health care field now. I love my physicians too, but it’s such a different thing. They specialize in the medicine, they are the medicine, while nurses specialize in the people, and they are the people!”

As the graduate is quick to point out, “We have our own science too as nurses, but we are holistic. People-focused, spiritual-focused on the patient’s emotional and general heath as well. The CON has really taught me to be an advocate, and they help you discover that in yourself. It has helped me become so much kinder, less closed-minded and mistrustful of people. They didn’t just teach me how to be a nurse, but taught me how to be a 100% better person.”

On accepting her degree today, Handel notes a very special family member will be there to share the moment with her. “I went to my dad’s graduation, and now he’s coming to mine,” she says, voice filling with emotion just as full as her life has become. “He didn’t really have a dad himself. He is such a sweet guy, not just a stoic hardworking father. He’s my favorite person, and I absolutely credit everything in my life to him.”