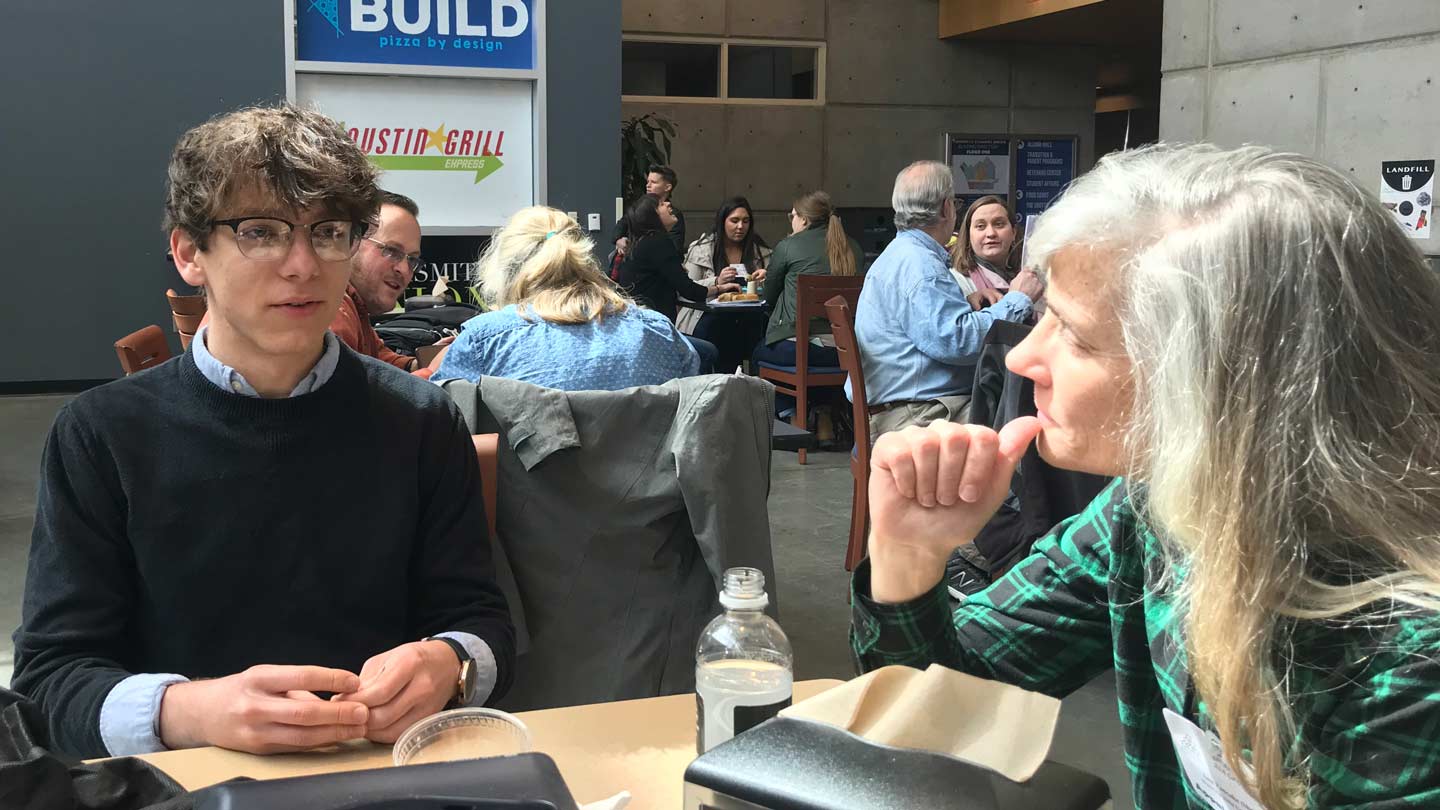 UAH biochemistry and English double-major Drew Greenway (left) speaks with fiction writer and essayist Dr. Ann Pancake Greenway, whose book “Strange as this Weather Has Been” served as the source material for his conference paper.

Growing up in the small town of Henderson, Tenn., Drew Greenway had always planned to attend The University of Alabama in Huntsville (UAH) and become an engineer. Only a funny thing happened once he got to college. "I realized that while I love building things, I really can’t stand math!" he laughs. So instead he decided to follow the old adage that if you do what you love, you’ll never work a day in your life – and what Greenway "really, really loves" is literature. "I thought, English is it!" he says. "And now I’m officially an English and biochemistry double-major."

As for any hesitation Greenway might have had about the feasibility of his new course of study, that was dispelled by Dr. Jim Coby and his fellow faculty members in UAH’s Department of English. "One day after class, I asked Dr. Coby what there is do with English and he said there’s so much!" says Greenway. "That, as well as conversations with other professors in the department, opened the door for me and showed me that it would be possible to make a job out of doing what you like."

At the time, Greenway was taking Dr. Coby’s freshman-level Honors English seminar. "The theme was the challenges of being creative in a time of environmental degradation, and so one of the books I taught was Ann Pancake’s ‘Strange as this Weather Has Been’," says Dr. Coby, whose primary area of study is literature of the American South. Written in 2007 and set in the author’s home state of West Virginia, the story follows the town’s residents as they struggle with the lasting and largely negative effects the coalmining industry has had on their community, their relationships, and the environment.

It was kind of like the equivalent of going to a concert and meeting all of your favorites at once.

"I think there was some initial reticence because the plot is inherently political," says Dr. Coby. "But we talked about engaging with it and with the characters’ reactions, because while you can’t work with indifference, you can work with disgust or love." Much to his surprise, the book’s author also agreed to his invitation to take part in the seminar, communicating with him by email throughout the semester. "Whenever they had a question about authorial intent, we could ask Dr. Pancake," he says. "And by the end, reactions to the book were uniformly positive – the students seemed to enjoy it, and those who didn’t still engaged with it."

It wasn’t until Dr. Coby shared his plans to write and present a conference paper about the book, however, that Greenway realized he too had more to say. "I was like, what’s this whole thing about conferencing and presenting your research? Is that possible?" says Greenway. "And Dr. Coby said absolutely." So they each submitted one for that spring’s Appalachian Studies Conference, Greenway for his paper entitled "More than Merely a Flesh Wound: Medieval Archetypes, "Monster Theory," and Madness and Civilization in Ann Pancake’s ‘Strange as this Weather Has Been’," and Dr. Coby for his entitled "‘That’s what I mean by it’s like something’s trying to get you’: Slow Violence in Ann Pancake’s ‘Strange As This Weather Has Been’." 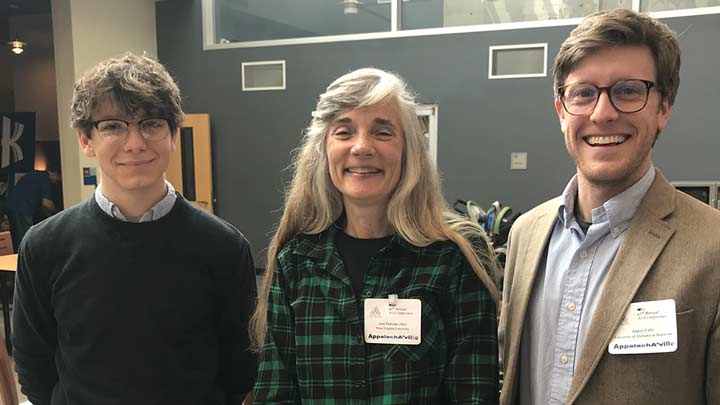 Both were accepted – "I was really relieved because I could finally stop checking my email!" laughs Greenway – and in March, they traveled to Asheville, N.C., to attend the conference and present their research. "It was kind of like the equivalent of going to a concert and meeting all of your favorites at once," he says. "There was so much knowledge of literature and a deep appreciation for Appalachia and the surrounding area. There were just so many good conversations." But while their presentations went "very well," says Dr. Coby, the real highlight was the opportunity to meet and spend time with Dr. Pancake, who was also in attendance.

"It was surreal," says Dr. Coby. "I saw that every good thing I’d thought about her from our emails was amplified. She was so outgoing and accessible." The experience proved even more meaningful for Greenway. "I love this book so much, and to meet the person who wrote it and to have her be supportive was really encouraging," he says. "It definitely makes me want to continue pursuing conferencing, and it confirmed that this is the path I want to be on." As for where that path will ultimately lead, Greenway says he’s not too worried. He’ll just keep following his heart.