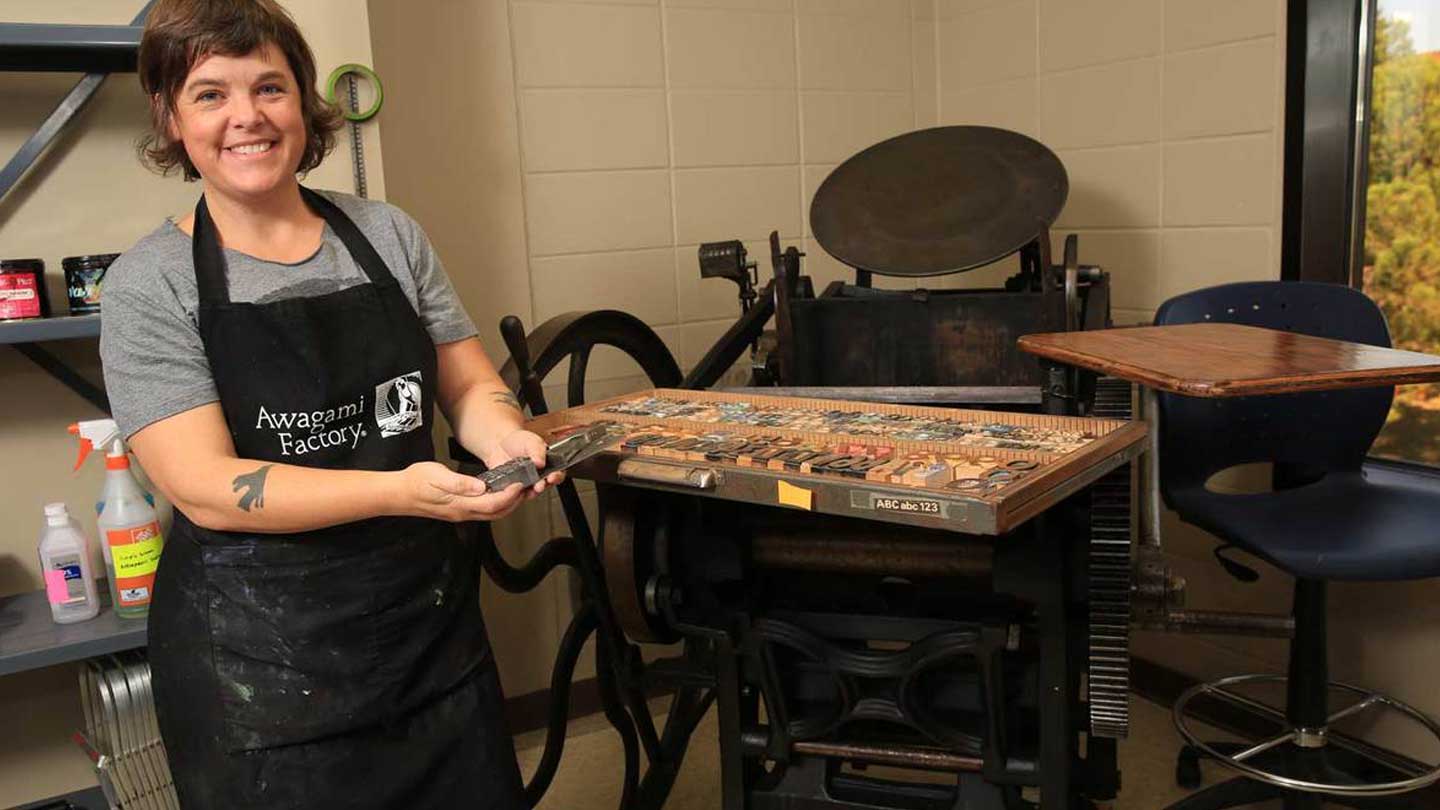 Katie Baldwin, an associate professor of art at The University of Alabama in Huntsville (UAH), part of The University of Alabama System, has received a Fulbright U.S. Scholar Award to travel to Taiwan for research on woodblock printing techniques at the International Print Center in Taipei. While there, she is also lecturing and creating a series of ten narrative works entitled "Modified Land: A Series of Woodblock Prints," a project that takes its inspiration from the ways mechanization shapes the land. 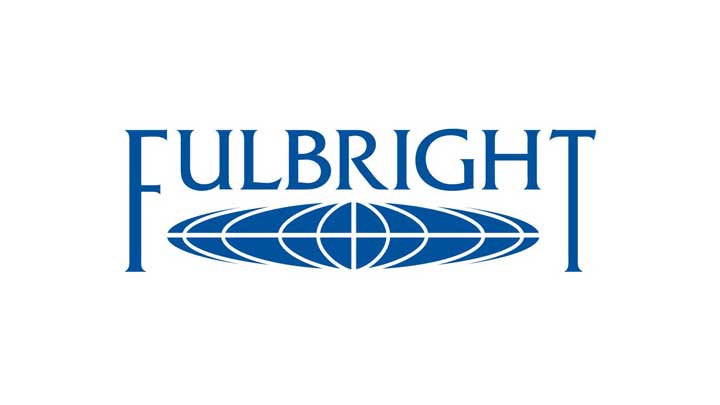 Baldwin is a printmaker and book artist who has traveled internationally as an artist in residence. She also has exhibited extensively in places like Geida University in Tokyo, Japan, and the Print Center in Philadelphia, Pennsylvania. Being named a Fulbright Scholar represents the culmination of a long and often arduous process.

"I was really thrilled!" the artist says on learning she had been selected. "After earning tenure, I saw an opportunity to apply, with the hope of receiving one for my sabbatical. I was not sure that the stars would align – but they did! The application is time-consuming, and the process is quite long. I learned that my application passed the first round, then the second, so when I learned I had been accepted at the third round, I was very happy!"

The UAH faculty member joins a select group of Fulbright alumni that includes 60 Nobel Prize laureates, 86 Pulitzer Prize recipients and 37 honorees who have served as heads of state. "Fulbrighters" engage in cutting-edge research, laying the groundwork for forging future partnerships between institutions. The Fulbright U.S. Scholar Program is funded through the U.S. Department of State and operates in more than 160 countries worldwide.

What originally sparked Baldwin’s passion for woodblock printing was a stint as an art student attending Evergreen State College in Olympia, WA, in 1993.

"I was first introduced to the basics of woodblock printing by my teacher, Peter Ramsey," she explains. "I was primarily studying sculpture. However, I became interested in the process of mokuhanga (traditional Japanese water-based woodblock printmaking) from looking at a Ukiyo-e print hanging in the print shop. I was curious as Peter described the process and history of the print. Shortly after, I came across a technical book in Japanese woodblock printing. I spent a few weeks experimenting with cooking rice paste and making a small baren [a disk-like hand tool with a flat bottom and a knotted handle used in Japanese woodblock printing] from cardboard, chord and canvas. I carved a woodblock and managed to pull a few humble prints. The idea that the process didn’t require a large studio space and was non-toxic stayed with me."

Her passion for the centuries-old artform continued to grow with time as her skills increased.

"In 2004 I earned my MFA from the University of the Arts in book arts and printmaking. After graduation, I no longer had access to the presses available to me as a student. My kitchen table was about to become my studio! That year, I attended the Nagasawa Art Park residency, along with other international artists, learning the process of mokuhanga. Many of us are familiar with the Ukiyo-e prints by artists such as Hiroshige and Hokusai. These prints or ‘pictures of the floating world’ were popularized in Japan from 1603 - 1868. The Ukiyo-e prints are incredible in their detail, color, composition and technique, and they give us a window into the everyday life of Edo Japan."

"In contrast, the work of Helen Frankenthaler from the 1980s - 2000s opened my eyes to the contemporary possibilities of mokuhanga. In 2017, I was at Anderson Ranch in Aspen, CO, and Brain Shure, Master Printer, showed me the scroll ‘Three Gorges Dam Migration’ by Yi-shi Ji, printed by Rongbaozai in Beijing. I really fell in love with this scroll. The scale is incredible, so was the narrative, and I was very interested in the way the full color imagery was developed without a key block."

The artist had a number of reasons for choosing Taiwan as her Fulbright destination.

"I wanted to expand my research in woodblock printing in East Asia," she says. "I found the size of the country to be manageable for exploring the landscape. I am also very interested in Taiwan’s unique history."

Language has not been a barrier, and she is especially enjoying the classes she is teaching.

"I do not speak Mandarin. However, I am learning a little. The students come into the studio class prepared to be learning primarily in English," Baldwin notes. "Taiwan has a national goal to be bilingual in English by 2030. What I am teaching is very visual. I will demonstrate how to make a book structure or a print from start to finish. They are encouraged to ask questions as I demonstrate the technique."

It was easy to find inspiration for her project, ‘Modified Land,’ as the artist has long felt a strong connection with landscapes wherever she goes.

"I was born in the Pacific Northwest, and my family spent holidays camping and hiking in places like La Push and Mt. Rainer where I was surrounded by incredible landscapes. When I travel, I am very much inspired by the people and places that surround me. When I was working on my proposal for my project, I began to look into the canal system in Taipei that once was the primary way to transport goods. As time went on, roads and highways were built over the canal systems, and water transportation within the city became obsolete. I also learned about the wetlands constructed on the Danshui River in the city of Taipei to improve water quality. We as humans have the ability to shape the world around us, and the collective decisions, as well as individual choices we make, say a lot about who we are. The land becomes a kind of stage on which our lives play out."

Her work-in-progress can be viewed on Instagram at @katieameliabaldwin. "I regularly post in-progress work, inspiration and images of my adventures in Taiwan," she says. "I do look forward to having a solo exhibition of the work I am making at UAH Wilson Hall gallery."

When she is not lecturing or creating art, she is accompanied by someone special to share in her explorations and enjoy the culture.

"My husband was able to spend the year with me! Which has been great, because we have been able to travel together. He is taking intensive Mandarin and a cooking class. On weekends we make a plan to see something that is on my list. We are living in Taipei, which is a major city. They have a great bike rental system, and we take the subway to the end of the line and catch buses to the beach and the mountains. There is of course fantastic food in Taiwan, so we are enjoying trying all kinds of different foods! I am also busy visiting printshops and museums. The National Palace Museum is one of my very favorite places. It has an incredible collection and is located in the Hidden City."

Taking residence in a faraway land in the midst of a global pandemic could have proved a daunting challenge, but, until just recently, living in Taiwan has proven surprisingly "normal."

"My husband and I had to quarantine separately for 15 days, followed by another week of ‘self-care isolation’ where we could quarantine in a hotel together," Baldwin notes. "Then we had to get a COVID test proving we were negative. After this we could essentially live in Taiwan completely normally. Eating in restaurants, gathering in crowds, etc. This made work really a pleasure. I could teach, meet with students and work in the community printshop. It was kind of a shock to suddenly be around people without the fear and caution I had been feeling for the past year. It felt very, very strange. But now that I have been here, being around people feels easy."

But, as so often happens with an unpredictable virus, things can shift quickly. "Taiwan experienced its first serious COVID outbreaks two weeks ago and had to go to a level 3. Which is not a complete shut down, but courses went online, mask wearing is required, takeout for restaurants only, no large gatherings...etc. Similar to the U.S., but with contact tracing for entry into public places. The restrictions are in place until June 14, and may continue depending on the numbers. The last couple of days it looks like they are starting to go down, so, I feel cautiously optimistic. Perhaps by July, things will return to ‘normal.’"