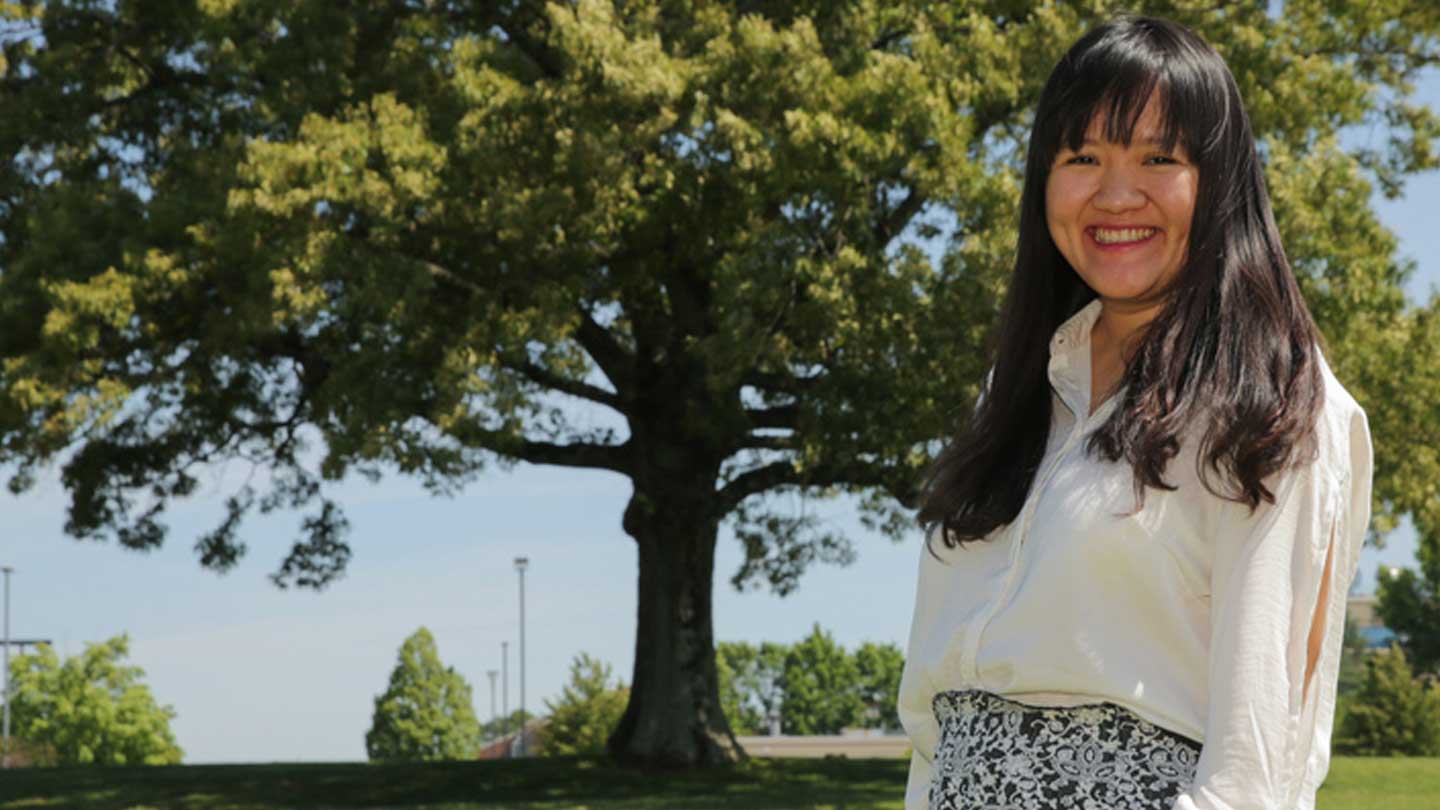 Trang Thuy Vo from Ho Chi Minh City, Vietnam, is studying urban effects on climatology and how to mitigate the heat island effect by effectively optimizing urban forestry in megacities for her doctorate in the Department of Atmospheric and Earth Science (ATS) at UAH, a part of the University of Alabama System. She is advised by Dr. Leiqiu Hu, an assistant professor of atmospheric science who co-authored the research paper.

"This is her first publication in her ATS Ph.D. program, which has demonstrated the growing capacity of new-generation spaceborne sensors on tackling complex urban environmental issues at high spatial and temporal resolutions," says Dr. Hu. "The research highlights spatially diverse and temporally dissimilar interactions among tree canopies, the atmosphere and the ambient built-up environment across a city."

Interpreting that data can help to identify the health of trees in complex urban settings by using remotely sensed observations, Vo says, and it can influence the species used and planting patterns of trees in urban landscapes.

"Our approach is first to reduce the labor required to manually collect the health of tree data," she says. "By investigating how urban trees interact with three environmental factors – greenery amount, distance to water bodies and building height – placement of trees and supplementary requirements for their growing conditions, like irrigation, could be improved in urban design."

Hard surfaces like brick, asphalt or concrete, the type of ground cover and the number and size of nearby water bodies called blue spaces all affect tree canopy temperatures and tree health in urban microclimates, the research found. That in turn affects the trees’ ability to combat the UHI effect, a well-known phenomenon in which a significant temperature difference occurs between urban and surrounding rural areas.

"We found that tree temperature varies significantly across New York City's boroughs. For example, tree temperatures in Staten Island – the greenest borough – are much lower and more homogenous compared to those in Manhattan, which has the most complex building morphology," Vo says. "That indicates an interaction between urban morphology and urban trees."

"The results are also important to support our future research on urban tree cooling capacity across cities, as canopy temperature is a key variable that influences evaporative and transpirative cooling," Dr. Hu says.

The study proposes some practical approaches to heat mitigation in densely built-up areas, like retrofitting buildings with green facades and green roofs, and supplying necessary irrigation for the drier conditions present in heat islands.

"For inland cities with a lack of cooling benefits from blue spaces, it is better to gather trees together rather than isolating them as small patches, and to supply them with sufficient irrigation. The greater the greenspace coverage, the lower the tree temperature," Vo says.

"It is interesting that the surface temperature of urban trees varies diurnally and spatially across the megacity, which emphasizes the influences of urban effects on this vital greenery component," she says. "By understanding this dynamic behavior, I strongly think that the health of urban trees can be improved."

A freely available dataset from ECOSTRESS, the ISS-based sensor instrument, was used in the research with a moderate spatial resolution Land Surface Temperature (LST) imagery of about 70 meters. Twelve clear-sky LST images were chosen and downscaled to construct a full diurnal cycle of urban tree temperature. Vo used a statistical approach to extract the tree temperature and then applied that algorithm to all of New York City.

She used a parallel programming procedure for image processing and calculating in order to reduce the processing time.

"As a result, we could have a tree temperature map for the whole of New York City in less than one hour," Vo says. "I hope that in the future, our downscaled scheme will be applied at a much larger scale, for example for the contiguous United States, so we will have a better picture of how healthy trees are across the whole U.S., given different climatic regions."