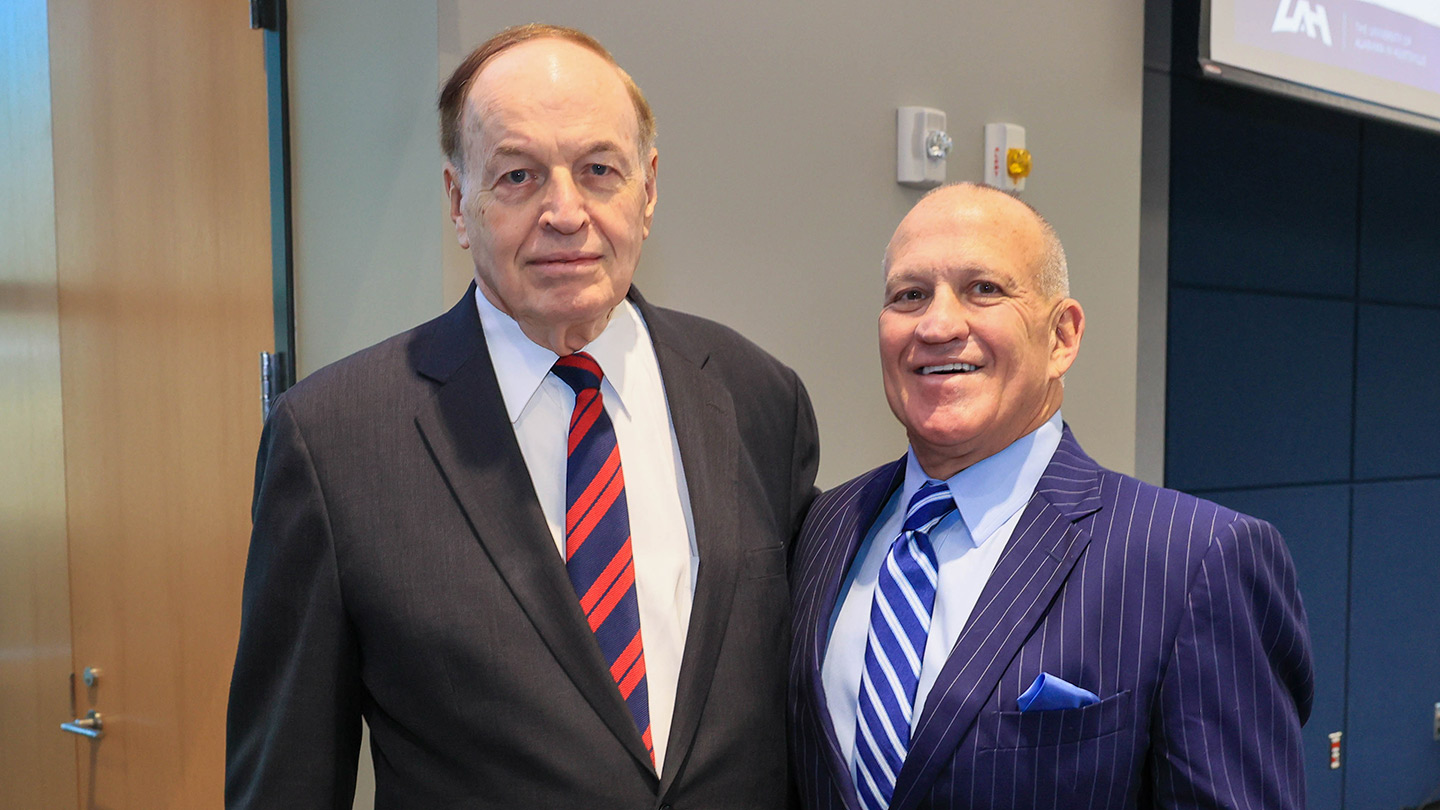 “Throughout his decades-long tenure in Congress, Senator Shelby has been a staunch advocate for research and education and made an indelible impact on higher education in Alabama,” said University of Alabama System Chancellor Finis St. John. “The University of Alabama System is deeply grateful for Senator Shelby’s countless contributions and service to our state. This endowment will allow UAH to recruit exceptional faculty, further prepare tomorrow's leaders and honor a true public servant."

Pending approval from the University of Alabama System Board of Trustees, this endowment will honor retiring Senator Richard Shelby, the senior United States senator from the state of Alabama. An endowed chair is one of the highest academic accolades a scholarly expert can receive and promotes the highest standard of excellence.

“Throughout my career, I have worked hard to prioritize higher education in Alabama. Our universities are of supreme importance when it comes to the future of our state,” said Senator Richard Shelby. “I am deeply honored that UAH and community leaders have created this Chair in Engineering in my name. This endowment will undoubtedly be of benefit long after my service in the United States Senate. I look forward to the talent that is procured by this fund and the impact it will have on UAH’s students, the Huntsville community and the state as a whole.”

“This is very special for UAH,” said UAH President, Charles L. Karr. “Certainly, Senator Shelby has been a great champion for North Alabama, UAH, the University of Alabama System and higher education throughout his tenure. His support has had a tremendous impact at UAH, and in our state and the nation. It will be an honor for us to have an endowed chair in his name, and it will allow us to bring outstanding faculty members to UAH – the type of faculty member that will make Senator Shelby proud. In addition, we are extremely grateful to everyone who contributed, making this possible.”

“Our North Alabama community pays a much-deserved tribute to Senator Richard Shelby today, as we announce an endowed Chair in Engineering in his name at The University of Alabama in Huntsville,” said former United States Congressman from Alabama, Robert E. ‘Bud’ Cramer. “This endowment will help UAH recruit and retain nationally recognized faculty in the College of Engineering that are training the next generation, highly-skilled workforce that serves the Huntsville community and beyond."

“I was born and raised in North Alabama, and was privileged to have served in the U.S. Congress with Senator Shelby,” Congressman Cramer went on to note. “I saw firsthand his focused accomplishments for our state and region. His impact on Huntsville and North Alabama has been nothing short of remarkable. Huntsville's metro population has more than doubled since 1986, the year Richard Shelby was elected to the U.S. Senate. Federal assets at Redstone Arsenal have grown from 20,000 on-post jobs in 1985 to 44,500 today. Huntsville is now the largest city in Alabama. We are not the same community we were due to his service in the U.S. Senate. We will miss him as our senator and will forever be grateful to him. Thank you, Senator Shelby.”

Shelby has had a vast impact on Huntsville and North Alabama during his tenure. His efforts have helped significantly expand Redstone Arsenal units, missions and tenants, including the Army Material Command, Army Aviation and Missile Command, the Missile Defense Agency, NASA’s Marshal Space Flight Center, DIA’s Missile and Space Intelligence Center and the expanding presence of the Federal Bureau of Investigation. He has been a vital supporter of the relocation of Space Command to this region as well, which will complement the existing command at Redstone Arsenal. In addition, he was instrumental in securing funds for a new $86 million federal courthouse to support the judicial needs of North Alabama.

Shelby’s impact on these programs and companies that support them range from $23 billion in NASA SLS appropriations over the past 10 years, to $2.5 billion in support of the FBI since FY19, as well $17 billion as Department of Defense programmatic additions in support of small- and medium-sized defense companies since FY18.

Shelby has also played a key role in bringing important facility and infrastructure enhancements to UAH. Examples include the Shelby Center for Science and Technology, the Intermodal Facility, the Invention to Innovation Center and the first phase of the Altenkirch Lawn greenway. The senator has been the prime driver of funding to support numerous UAH research projects and programs as well, including the UAH Propulsion Test Facility, climate research, NOAA Tornado Center, Tornado and Hurricane Hazards Operations Center, drought research, transportation, infrastructure and logistics research and optical systems research.

The senator has worked tirelessly to bring jobs and economic growth to the state, while championing growth and development for all Alabama citizens. He has directed hundreds of millions of dollars to Alabama, benefitting state infrastructure; promoting high tech, aerospace, defense/military programs; and supporting advanced education and research programs that will have a lasting impact of growth and opportunities for generations to come.