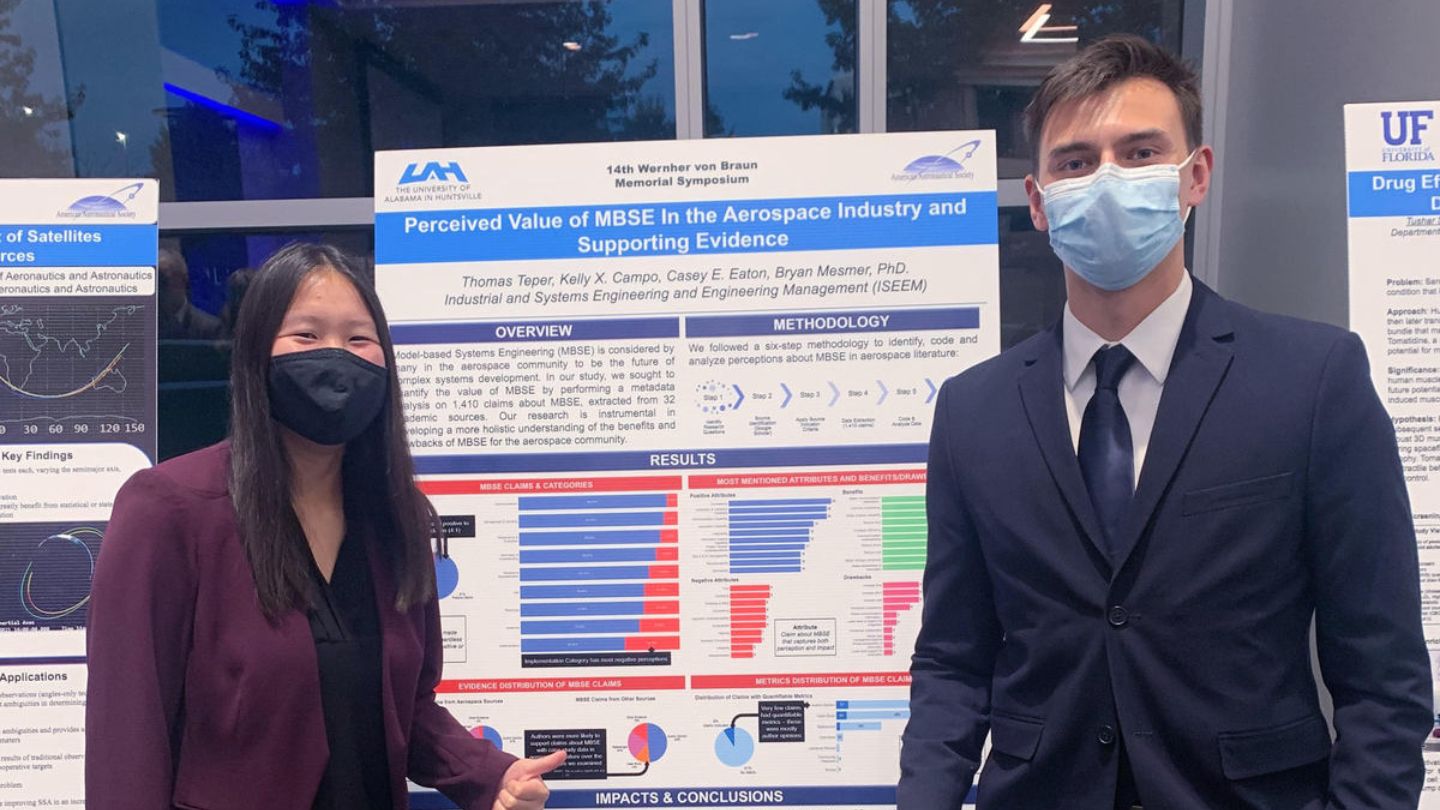 Two undergraduate researchers at The University of Alabama in Huntsville (UAH) presented their research on the value of model-based systems engineering (MBSE) virtually to members of the United States Congress in Washington, D.C. during the annual Posters on the Hill event.

Campo and Teper undertook a systematic literature review of 60 academic sources to help decision makers better understand which aspects of MBSE are positively or negatively perceived. MBSE is an emerging approach in the field of systems engineering with applications in aerospace, defense and autonomous vehicle systems.

The pair found that the systems engineering community positively perceives MBSE but that 86% of claims about MBSE are not substantiated with quantitative data, while 47% of claims are based on author opinions. Some more positive aspects they found about MBSE are improved verification and validation, consistency and reasoning in approach, and better risk management, while the more negative aspects include difficulty in understanding and accepting the approach and the approach’s complexity.

The research has applications in space exploration and defense systems that are relevant to organizations like NASA and the Department of Defense (DoD). It was published and presented at the 2021 American Society for Engineering Management International Annual Conference and at the 2021 Wernher Von Braun Memorial Symposium.

“The next frontier of systems engineering evolution will be at the intersection of multiple disciplines to develop an underlying theory to support the use of certain tools or approaches,” Dr. Mesmer says. “Kelly and Tom’s research contributes significantly to the systems engineering community’s knowledge on if MBSE should or should not be implemented.”

Doing research has improved her presentation and public speaking skills, says Campo, who got involved as a freshman by reaching out to professors via email.

“I have learned about cutting-edge developments in industry related to my major, submitted a journal article, published a conference paper and attended several conferences,” she says. “Through researching MBSE, I have gained an understanding of a new and relevant systems engineering approach, with which I will be well versed when I enter the workforce.”

Since joining MRG as a freshman, Teper says he has learned how to craft research papers and journal articles, as well as how to present to professional audiences.

“Research on MBSE has allowed me to network with brilliant individuals like Kelly, Casey and Dr. Mesmer, as well as the other awesome members of my lab group,” he says. “I have come to gain a significant understanding of what MBSE is and how it is perceived in industry, which is not something I would have expected a year ago.”

Nominated as a semi-finalist for the DoD SMART Scholarship, Campo plans to complete a master’s degree through UAH's Joint Undergraduate Master's Program, which allows undergraduate students to study at the graduate level. During her time at UAH, Campo has become an Honors Mentor Coordinator and is involved in the International Council on Systems Engineering (INCOSE), the Tau Beta Pi professional honor society and the American Society of Civil Engineers.

Since attending UAH, Teper has been involved with the American Institute of Aeronautics and Astronautics and INCOSE, and is a member of Tau Beta Pi. His interest in space and aviation, with a focus on humanity’s expansion into space, motivates his pursuit of an aerospace engineering degree. Teper interned with Jacobs Engineering Group at NASA’s Marshall Space Flight Center, where he worked at the Systems Integration Lab with engineers on the NASA Artemis program. He is a recipient of a DAAD RISE scholarship, which funds travel to conduct research at a German university.

Only one or two students are selected from each state by the Council on Undergraduate Research for Posters on the Hill, says Dave Cook, UAH director of undergraduate research.

“In the past, UAH has proudly represented Alabama there four times between 2014 and 2018,” Cook says. “Once again, UAH students have been selected to represent our state and the groundbreaking work that our undergraduates do with our eminent faculty and research staff at UAH, and we are proud of them.”